Betfred Presents Cheque To Jessie May

World Championship sponsor Betfred has presented a cheque for £25,000 to WST’s official charity Jessie May Children’s Hospice at Home, following a barrage of century breaks in the tournament at the Crucible.

Before the tournament started, Betfred pledged £200 for every century break, to be rounded up to £25,000 if the ton tally reached 80. Amazingly, that target was hit with seven days of the event still to be played, when Mark Williams made the 80th. 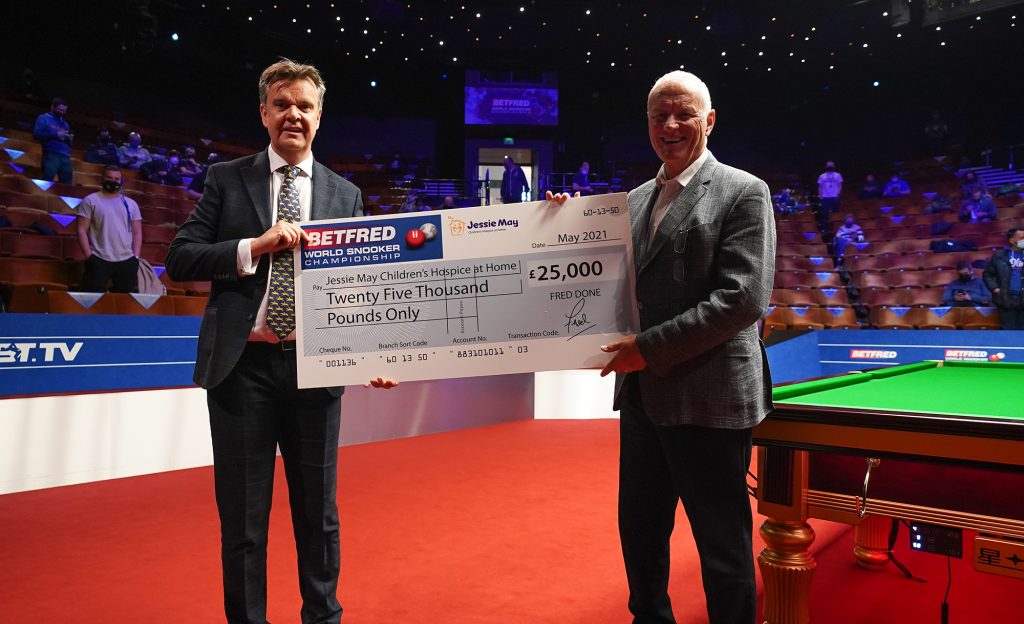 Mark Pearson of Betfred presents the cheque to Barry Hearn

The massive £25,000 donation will help pay for the incredible work done by the charity, which provides a hospice at home service for terminally ill children, offering care to families in the South West area. For more information about Jessie May visit www.jessiemay.org.uk

Chris Roys, Chief Executive Officer of Jessie May, said: “We’ve said it time and time again, but there just are no words that can truly explain what this means to everyone here at Jessie May, and the families we support.

“We are coming up to our 25th Anniversary, and so this £25,000 donation has an even more special meaning to us. Thank you so much to Betfred for their phenomenal generosity this year, World Snooker Tour for their continued support in this, our fifth year, and of course to the players whose fine form has triggered this incredible gift.”

WST Chairman Barry Hearn OBE accepted the cheque on behalf of Jessie May at the Crucible on Saturday. He said: “This is a remarkably generous donation from Betfred and my sincere gratitude goes to Fred Done and his fantastic team. I know how difficult it has been for Jessie May to keep their fund-raising going over the past year in these challenging times and I have been amazed by the dedication they have shown to maintain support for the many children and families who rely on their care. This donation will give them a huge boost.

“Congratulations to the players for their skills on the table, we are well on course for a record number of centuries.”