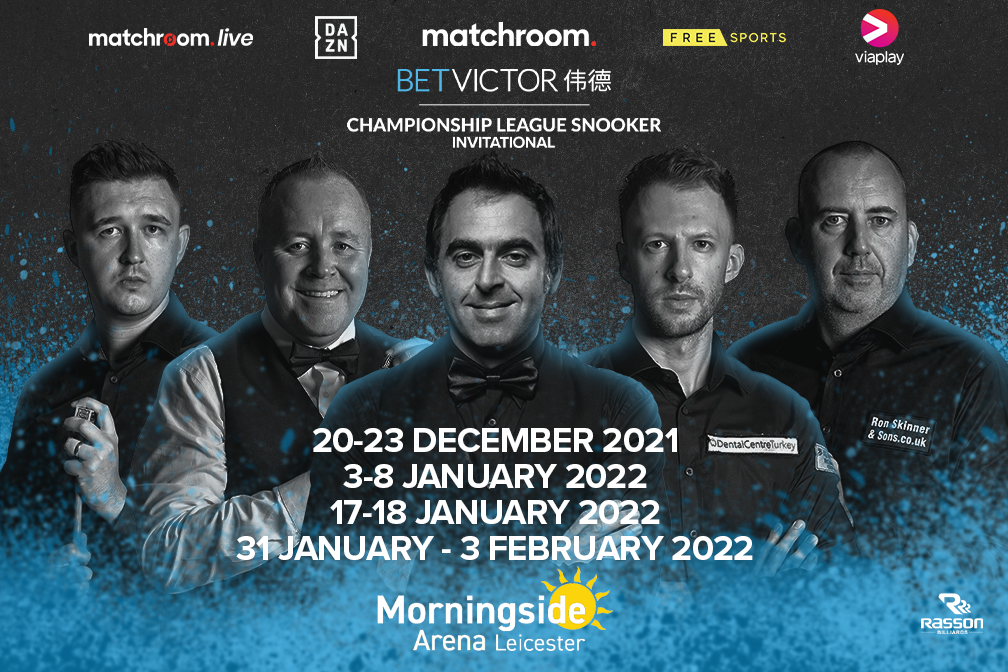 BetVictor Championship League Snooker Invitational will return this December in Leicester at the Morningside Arena as 25 of the world’s best players meet in groups of seven to battle it out for a place in the final Winners’ Group in February 2022.

The return of BetVictor Championship League Snooker Invitational sees Group 1 unfold on December 20-21 and Group 2 on December 22-23 before Groups 3-5 get underway from January 3-8 and Group 6 on January 17-18. Group 7 and the Winners’ Group to find out the winner will take place from January 31-3 February.

Judd Trump, Ronnie O’Sullivan, John Higgins, and invitational defending champion Kyren Wilson are amongst the first names to be confirmed with Wilson entering at Group 3 and three-time winner Judd Trump in at Group 4. O’Sullivan and two-time Higgins both take up spots in Group 7.

BetVictor Championship League Snooker Invitational will be broadcast worldwide from the first match for the first time. Fans in the UK and Ireland will be able to see the action on FreeSports with those in Scandinavia and the Baltics able to watch on Viaplay. Fans in Bosnia and Herzegovina, Croatia, Macedonia, Montenegro, Serbia, Kosovo, and Slovenia will be able to watch live on Sportklub and those in the Czech Republic on Nova. Further broadcasters are to be announced. The tournament will also be live on betting websites around the world, as well as on global OTT platforms and Matchroom.Live. DAZN viewers in the USA, Canada, Brazil, Spain, Italy, Germany, Austria, and Switzerland will also be able to watch live.

The tournament carries a prize fund of £205,000 and a place in the 2022 Cazoo Champion of Champions and Emily Frazer, Matchroom Multi Sport Managing Director is excited about its return: “It’s fantastic to be working with BetVictor once again for the BetVictor Championship League Snooker Invitational. The tournament has grown in reputation every year since the first edition in 2008 and is now complemented by the full ranking version that we have seen over the last few years. We’re excited to deliver CLS worldwide with fans able to watch the action wherever they are in the world on their TV screens for the first time from the first match to the last match.”

The BetVictor Championship League Snooker is a venture between Matchroom Multi Sport and Perform which began in 2008, where 25 of the game’s elite players compete with matches being broadcasted on the biggest sports streaming platforms.

Each group features seven players and is played across two days with two tables in operation. All matches are a best-of-five, and each group is played to a round-robin format. The top four in each group contest the play-offs, with the eventual winner advancing to Winners’ Group. The three play-off players who don’t advance will move into the next group, where they are joined by the player who finished fifth in the table and three new players. Those finishing sixth and seventh in each group are eliminated from the competition.

A total of up to £205,000 prize money is available with players earning £100 per frame won, with significant bonuses for their final group position and increased prize money in the Winners’ Group. In its 12-year history, the BetVictor Championship League Snooker has paid out over £2,000,000 in prize money.