Stuart Bingham made what he described as the best break of his career to beat Anthony McGill 13-12, setting up a semi-final with Mark Selby at the Betfred World Championship.

When it mattered most, Bingham compiled a fantastic run of 125 to finish a thrilling contest in style and reach the one-table situation in Sheffield for only the second time. The first was in 2015 when he went all the way to the title.

Bingham has now made two match-winning breaks at the Crucible this year, having beaten Ding Junhui 10-9 in the first round with a run of 70 in the decider

Having come through two matches just to make it to the Crucible, world number 18 Bingham is aiming to become the third qualifier to lift the trophy at the Theatre of Dreams, following Terry Griffiths in 1979 and Shaun Murphy in 2005.

Basildon’s 44-year-old Bingham is through to the semi-finals of a ranking event for the first time in over two years and now meets three-time champion Selby over a possible 33 frames on Thursday, Friday and Saturday. It will be their first match at the Crucible.

McGill knocked out Ronnie O’Sullivan in the second round by a 13-12 scoreline but couldn’t repeat the trick. Remarkably, five of his last seven Crucible matches have gone to a deciding frame and he has now lost two of those, heaving suffered a 17-16 reverse in the semi-finals against Kyren Wilson last year.

Glasgow’s McGill won the first frame of the concluding session with a break of 106 to go 10-7 ahead. He had first chance in the next frame but missed the black off its spot on 7, and that proved a turning point as Bingham took four frames in succession with runs of 75, 51, 90 and 91.

World number 16 McGill had a scoring chance in frame 22 but went in-off as he potted a red on 19, which handed Bingham the chance to make 41 and go 12-10 up. Bingham had match-winning opportunities in each of the next two frames, but couldn’t make the most of them as gritty McGill fought his way back to 12-12.

And the Scot had the first opportunity of the decider, but after making 11 he was desperately unlucky not to land on a red after smashing into the pack off the brown. After a brief safety exchange, Bingham slotted a mid-range red into a  top corner and was never out of position as he made his fourth century of the match and tenth of the tournament. 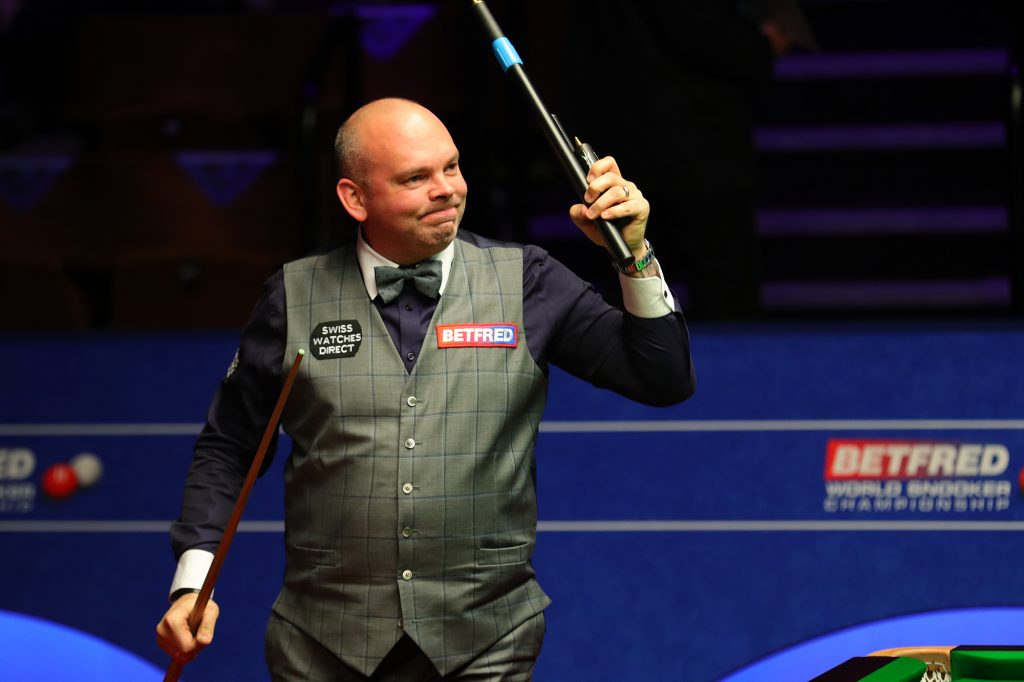 “At 12-10 I went into the reds and landed on nothing,” said Bingham, winner of six ranking titles. “After that I felt it wasn’t going to happen for me. Fair play to Anthony he came back strong to go 12-12. Luckily for me he didn’t fall on anything in the decider. My break was the best of my career.

“Last night I had a great sleep because I was so drained. I was a bit gutted to be 9-7 behind but I felt I hadn’t done much wrong. I have lost a lot of deciders this year and that can make or break your season. But this time I held myself together and maybe that’s a good omen.

“My game is getting stronger and hopefully I can keep scoring heavily. The emotion is coming out now when I think about playing on the single table for the first time in six years. It’s a totally different atmosphere. I will enjoy every second.”

McGill said: “I didn’t play that well today and Stuart played brilliant. I wish I could have put a bit more pressure on him. One part of my game I don’t doubt is my bottle. I made a great dish at 12-10, and then held my nerve for 12-12. In the last frame I couldn’t have hit the brown any better, but I didn’t finish on a red. I have played a lot of good stuff here, my game is so good right now. I won’t let today’s result get me down. What I am doing is working, I am going in the right direction.”