Broadcasting From The Crucible - World Snooker 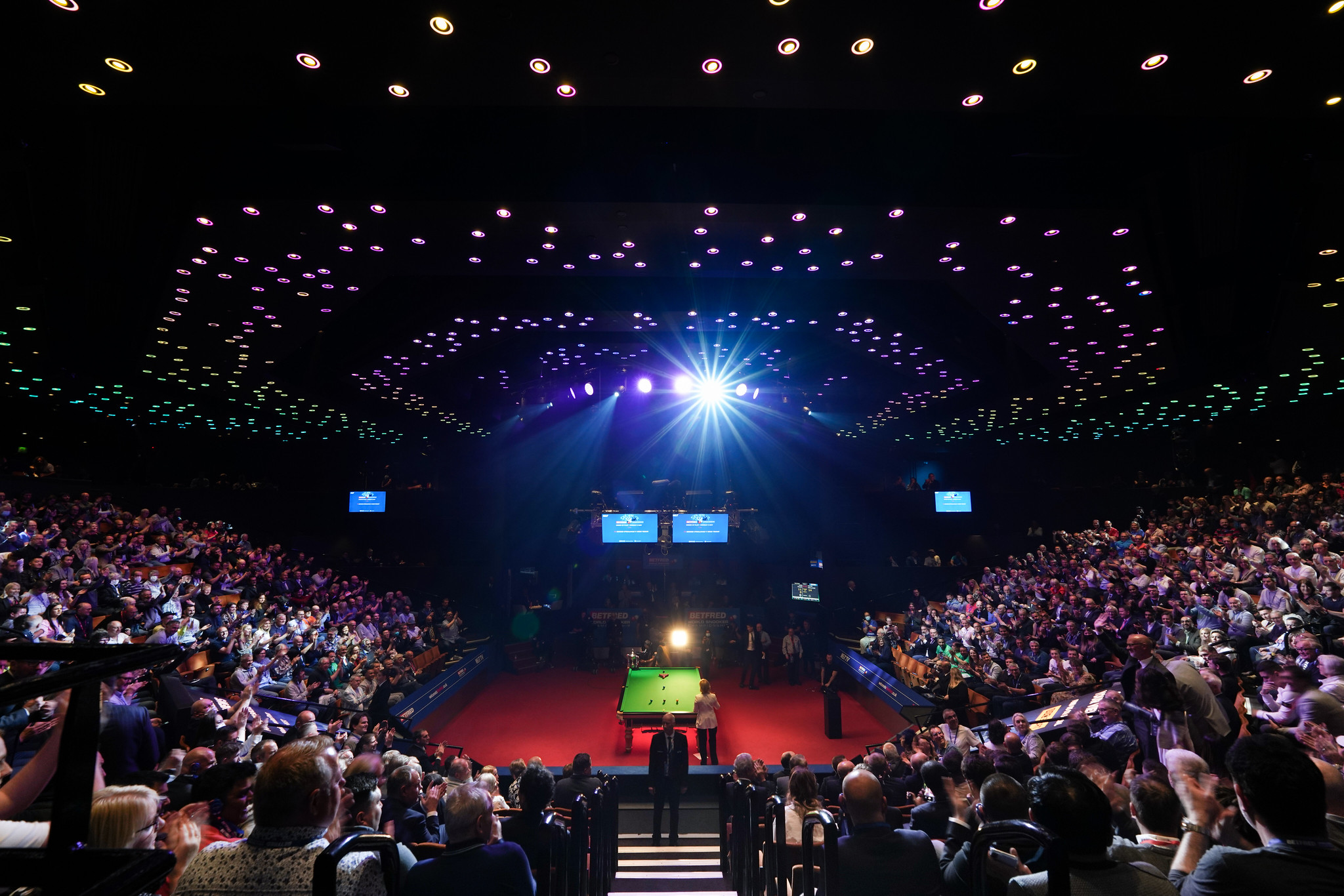 The climax of Ronnie O’Sullivan’s 2022 Betfred World Championship final win over Judd Trump reached a peak audience of 4.5 million on BBC Two and millions more fans tuned in on Eurosport and other broadcasters around the globe.

Ensuring that a major sporting event can be successfully beamed to so many households takes months upon months of meticulous planning and precise execution.

Behind the pictures which enthral sport fans around the world, are teams of talented professionals. They need to craft captivating content away from the table, as well as rig the dozens of cameras and thousands of wires to capture the action on the baize.

BBC and Eurosport are present in Sheffield throughout the tournament, while a raft of other broadcasters work remotely to ensure that you can tune in to the action wherever you are on the planet.

IMG, who produce the event for the BBC, have a total of 130 personnel present in Sheffield to execute the broadcast. Around 55 of these are part of the technical team, while the remaining 75 are concerned with looking after production management and the editorial side of the BBC production.

In charge of the editorial part of the team is Executive Producer Alison Witkover, who alongside fellow Producer Dominic Wright, bears responsibility for the content we see on the BBC.

Over the course of the 17-day marathon, broadcasters have a huge amount of hours to fill. Planning must begin very early from an editorial and televisual standpoint. The unpredictable nature of snooker means that there needs to be an overflow of content, which can be called upon in the event of an early finish.

Witkover said: “Right from the start of the season we are thinking about the World Championship and gearing up for it. We need to spend a lot of time planning feature ideas. For example, we filmed a series of analytical pieces in Milton Keynes with Steve Davis and Stephen Hendry, that can be updated throughout the season and used at any of the events we do. We try to film some other features off site as well. This year we were at a WDBS disability event and the World Women’s Championship.

“From early on in the tournament we have discussions with our creative team for features and openers, they then have to go out and make them happen. It is hard to plan player related content because you don’t know who will progress through the rounds. So we gather quotes on a wide range of topics from the players.

“Because we are on the BBC and don’t have any commercial breaks, there is a lot of time to add colour around the snooker. We try to bring the stories people may not know about and film things which get across the personality of the players. Our production team have good relationships with the players and the WST media team, so this helps us get access to film different sorts of pieces. Generally, the players are very obliging with their time.

“As well as all of the stylised features, it is important to get to grips with the latest news stories and talking points. We try to do pieces in the press room with the journalists to get their perspective. It is really important to offer both sides of an issue and give all parties their chance to speak. We have multiple presenters and reporters in the mix at the World Championship, so we have plenty of resources to go out and get the stories.”

In the immediate aftermath of a World Championship match, the players are interviewed by a range of media. Firstly, BBC and Eurosport will get an immediate reaction from one or both players either in the ‘flash’ positions just outside the arena, or in the television studios with the main presenters.

Next up, players will head for the media centre, where interviews are carried out by radio journalists, the written press and digital media video crews. Finally, they head to the ENG room (Electronic News Gathering), for interviews which are used in TV highlights programmes, as well as answering questions about their upcoming opponents, for clips which are held back for use in the next round.

Fitting all of this into the backstage areas at the Crucible isn’t a straightforward exercise, as there is limited space behind the scenes. Finding places for studios, cameras and technical equipment is like putting together pieces of an intricate jigsaw.

Witkover explained: “The planning meeting for the event itself is in February and we will go through the venue and look at the various positions with our technical team. We decide where we will present our different programmes, so they don’t all look the same. The main challenge with the Crucible is that it is a very small venue so the options are somewhat limited. We can’t fit the studio in the arena while there are two tables, so we station ourselves in the Winter Gardens instead. It works well to provide us with our own space where we can add a little bit of fan engagement as well.

“Rigging starts on the Monday, prior to the tournament starting. We do all of the cabling for our Winter Gardens studio and our position in the practice room, which we use for our morning and evening shows. We have cable drops for cameras in the press room, the players lounge and all over the building, so we can get across what it is like behind the scenes. When play moves to the single table setup, we move our studio into the arena. That has to be done overnight between the quarter-finals and the semi-finals. In our compound outside, we have four broadcast trucks, a security cabin and cabins for our editing staff. It is all rammed in at the side of the Crucible, so we have to make the most of the space we have. It is a tight venue, but it is our job to work around that.” 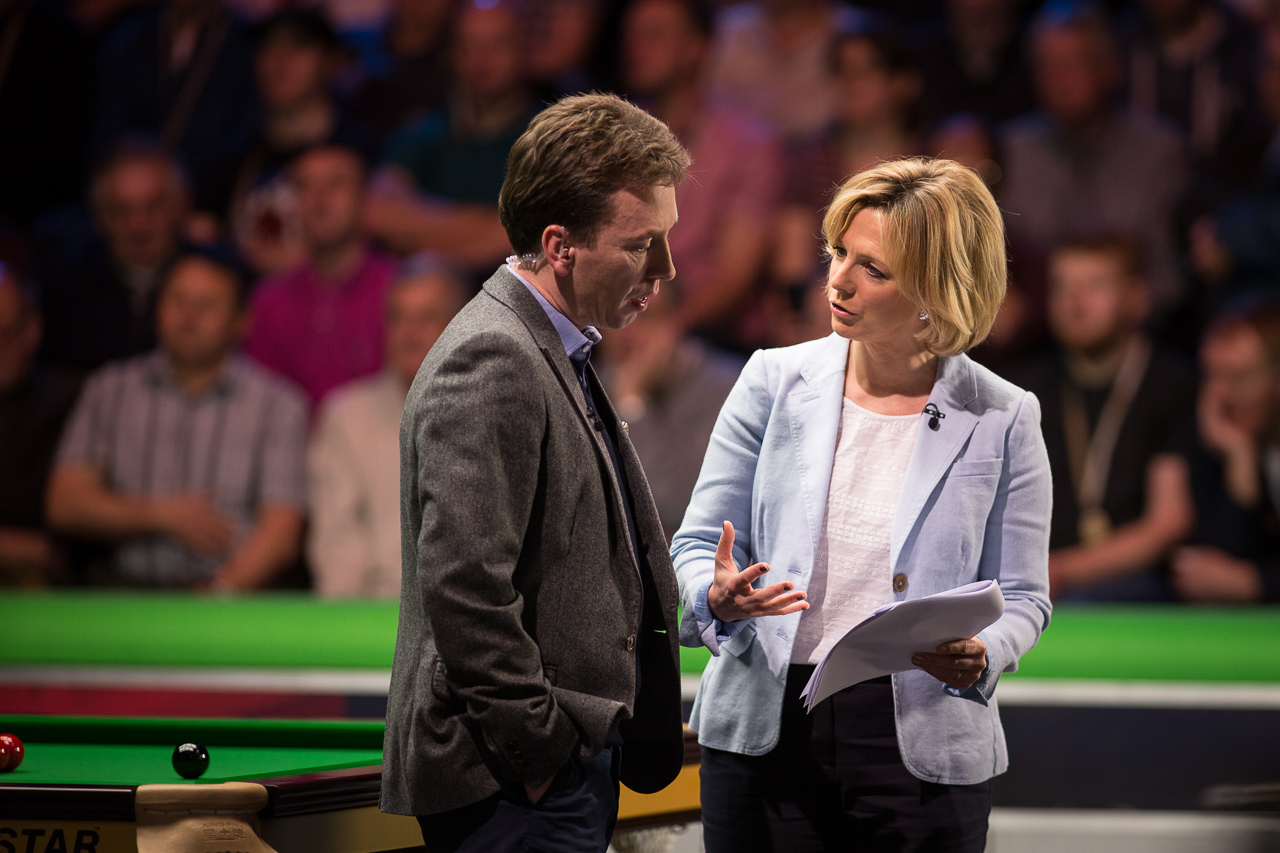 Ken Doherty and Hazel Irvine waiting to go on air.

When the tournament begins, coverage of the action on the tables requires flexibility and thinking on the move. Having two tables operating at once provides an additional challenge for the producers as they guide the broadcast.

“The daytime producer has to make a running order for the programme the evening before,” said Witkover. “The edit team needs a bit of advance notice to put together all of the features and graphics which are required. However, in live sport, stories emerge out of the blue and you frequently need to restructure things. You always have to be ready to adapt. Hazel Irvine usually presents the main show at 1pm and she will come in at about 9:30am to begin preparations. She writes the script, we go through it together and then rehearse the show. From there on, once you are into live play, you need to be reacting to whatever is happening on the table.

“With snooker you have no idea how long a frame or match is going to go. When you have two tables there are sometimes tricky decisions about when you want to switch to the other match. There is often no right or wrong answer. As a producer sometimes you just have to make a decision. It may turn out to be the right or the wrong one. You can’t show both games at the same time on BBC Two, but we do remind viewers that everything is available across iPlayer and the BBC Sport website.

“We are always speaking to the presenter and the guests in the studio through their earpieces on talkback. There’s discussion about which shots to analyse in between the frames, whether we want to stay with the commentators or whether we want to come back to the studio. With sports like snooker you are constantly having to react to what is in front of you, and it is more fun that way. It would be boring if everything was straightforward!”