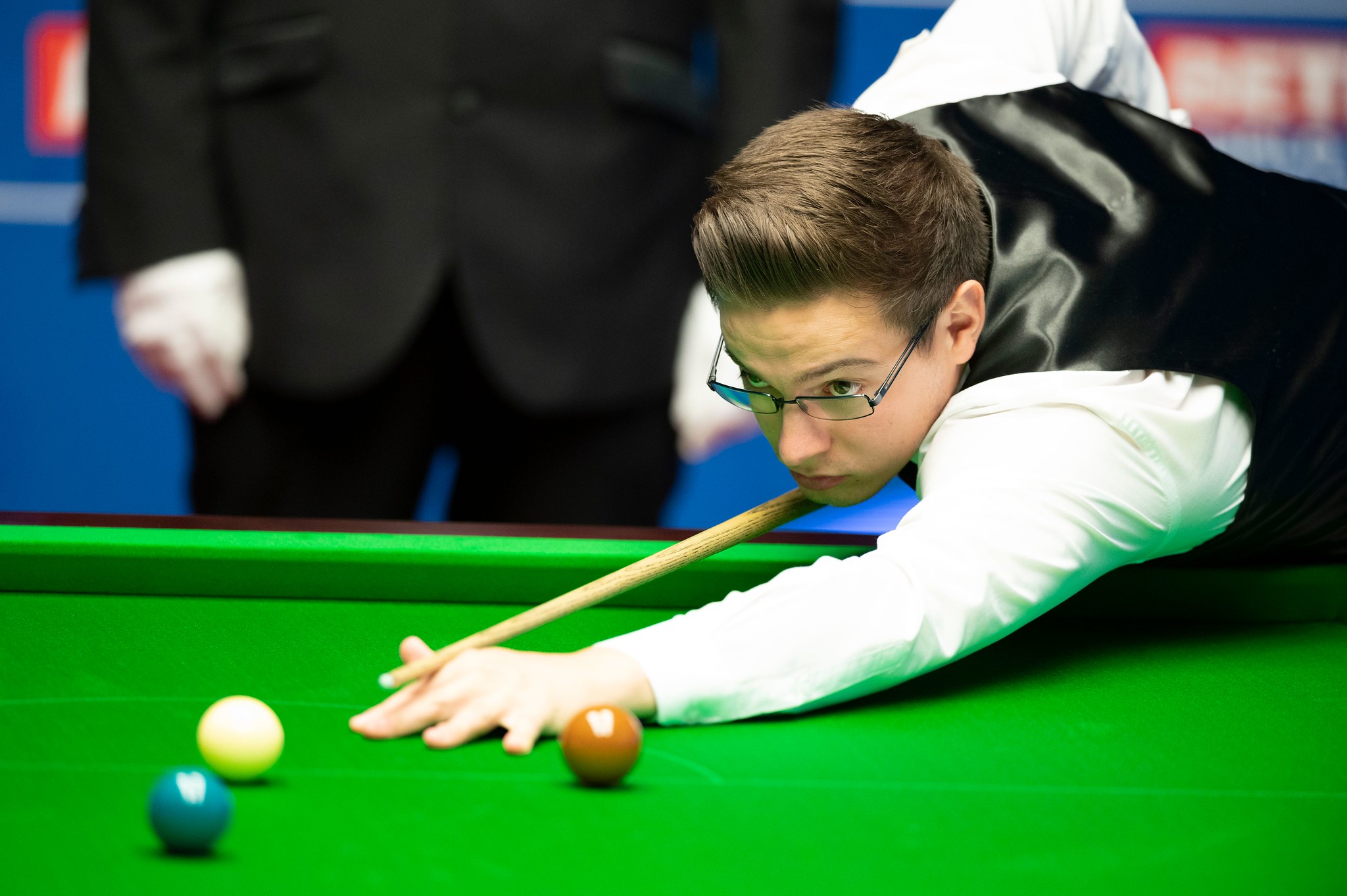 The 25-year-old Rotherham cueman knew he had to reach the Theatre of Dreams to remain on the circuit and achieved his target after a nerve-shredding 10-8 win over Robert Milkins in the final round.

Carty went on to face 2015 World Champion Stuart Bingham at the Crucible and gave a good account of himself, before eventually losing out 10-7.

World number 113 Carty is currently in action at BetVictor German Masters qualifying in Milton Keynes, he will face Ding Junhui tomorrow for a place in the final stages after beating Fan Zhengyi 5-1 in the first round.

We caught up with the Yorkshireman to look back on the Crucible and preview tomorrow’s clash with Ding.

Ashley, how would you assess your form so far this season?

“Since the Crucible I’ve had a bit of a change. I’ve got a new cue and I’ve stopped wearing my glasses as well. It was a bit of a risk really, but the glasses situation hasn’t made a difference at all. I ordered my new cue a year ago, so it was always in my mind to change that. I’ve started using my cue from John Parris and it is amazing, I could tell it was going to be great from day one.

“My left eye is a lazy eye, I was born with that. I wore my glasses basically to see if it would improve or not. When I got to the age of 18, the opticians said it would never get better or worse. As I had worn them my whole life, it became a bit of a natural habit to wear them so I kept going with it. I went for an eye test after the Crucible and they said the same again, so I gave it a try without them and and realised it makes no difference at all.

“I had my old cue for about seven or eight years. I found it was well suited to playing on the amateur circuit and club tables. When I got on the tour that cue wasn’t doing what I wanted it to. It wasn’t suited to playing on the Star tables with fine cloths and reactive balls. I hadn’t had a great two years, so I just looked at getting a different one. I’m really glad I’ve done it, as it was a big move to take.”

How much are you looking forward to your match against Ding Junhui on Friday?

“Ding is one of the best players in the world. It is a good challenge for me. I’d like to hold my own if I can and put up a good game. As long as I am competing. I am going out to win, but I want to give a good account of myself. The first round is the main aim, to get the prize money and the ranking points. Anything else is a bonus really. If I can get into the last 32 regularly and build on that to reach some quarter-finals that would be a great season.”

Your run at Crucible qualifying was all or nothing, in terms of either reaching the final stages and staying on the tour. How proud were you to come through and clinch your place at the World Championship?

“Looking back on it, that was an absolutely huge week. There haven’t been any amateur tournaments since Q School, because of the coronavirus situation. That would have been a massive change to my life. The current situation makes staying on the tour even more important than I realised at the time. Qualifying for the Crucible was an absolute dream and to do it after two difficult years, with tour survival on the line, that makes it even more special.”

Was your final round match with Robert Milkins the most pressurised situation you have played in?

“Absolutely, but it helped that I have quite a good record against Robert. I’ve beaten him on the tour and I’ve beaten him in pro-ams as well. I knew going into that match that I had a good chance and it gave me a lot more confidence. I just wanted to get off to a good start and I managed to get 5-4 up after the first session. I knew going into the last session just to carry on what I was doing and that it was working. I’ve certainly never experienced pressure like the end of that match. I potted match ball and I didn’t mean to do it, but I gave it the biggest fist pump ever. The emotion just came out of me. I still had to pot another ball to make sure of the frame and actually get over the line.”

How much did you enjoy your first experience of the Crucible?

“It was a mental week really. After the qualifiers I think I only had two days until the Crucible. It all came at me very quickly. Luckily, because I was scheduled on the first day I got to play in front of a reduced crowd for my first session, that was fantastic. I’ve not played in front of a crowd for quite a few months now, but I had all of my friends and family there that day so I was emotional and very proud. Looking back, I have to pinch myself with how it panned out. It hasn’t quite sunk in. I will often search that match on YouTube and watch it back. It happened so fast that it was hard to actually take it all in. To be able to look back on it does make it very special.

“I was really excited to walk out and for all of my friends and family to be able to cheer me on coming down those stairs. Hopefully I can do it many more times throughout my career and hopefully in front of a full crowd and a packed Crucible.”

It was a tight match against Stuart Bingham, do you feel you missed an opportunity to progress?

“I was really calm, which surprised me. It took me the first few frames to get used to the table. It was so fast and so reactive. It was nothing like what I am used to playing on before that. If I’d adapted a bit better, I could have been leading after the first session. He was phenomenal in the first four frames of the second session. I didn’t manage to score many points, but then I managed to come back at him. I felt at home really. I was comfortable and once I settled in, I felt good in myself. I absolutely loved the experience.”

How have you adapted to the current regulations on tour with testing and no crowds and what are your goals for the months ahead?

“I think most of us, especially the lower ranked players, have just got used to it. The top players, who are used to playing in front of big crowds all of the time, will find it harder. There isn’t much difference for us really. We are all just lucky to have tournaments right now. All of the procedures are there to keep us safe, you just have to get on with it and count yourself lucky to have the chance to play and earn some money.

“Hopefully I can keep improving year on year, which I’ve managed to do so far. I want to get into that top 64 of the world rankings and stay on the tour that way this time. That is my main target. My best tournament finish is the last 32 and I want to better that sooner rather than later. If I can keep improving and achieving that will be great.”