Alexandra Palace, home of the Masters

Snooker returns to Alexandra Palace for the first time in two years on Sunday, with one of the most highly anticipated editions of the sport’s most prestigious invitational event.

The Cazoo Masters showcases the best 16 players in the world and each year high quality snooker and thrilling drama are guaranteed. Here is a look back at the last five Masters finals… 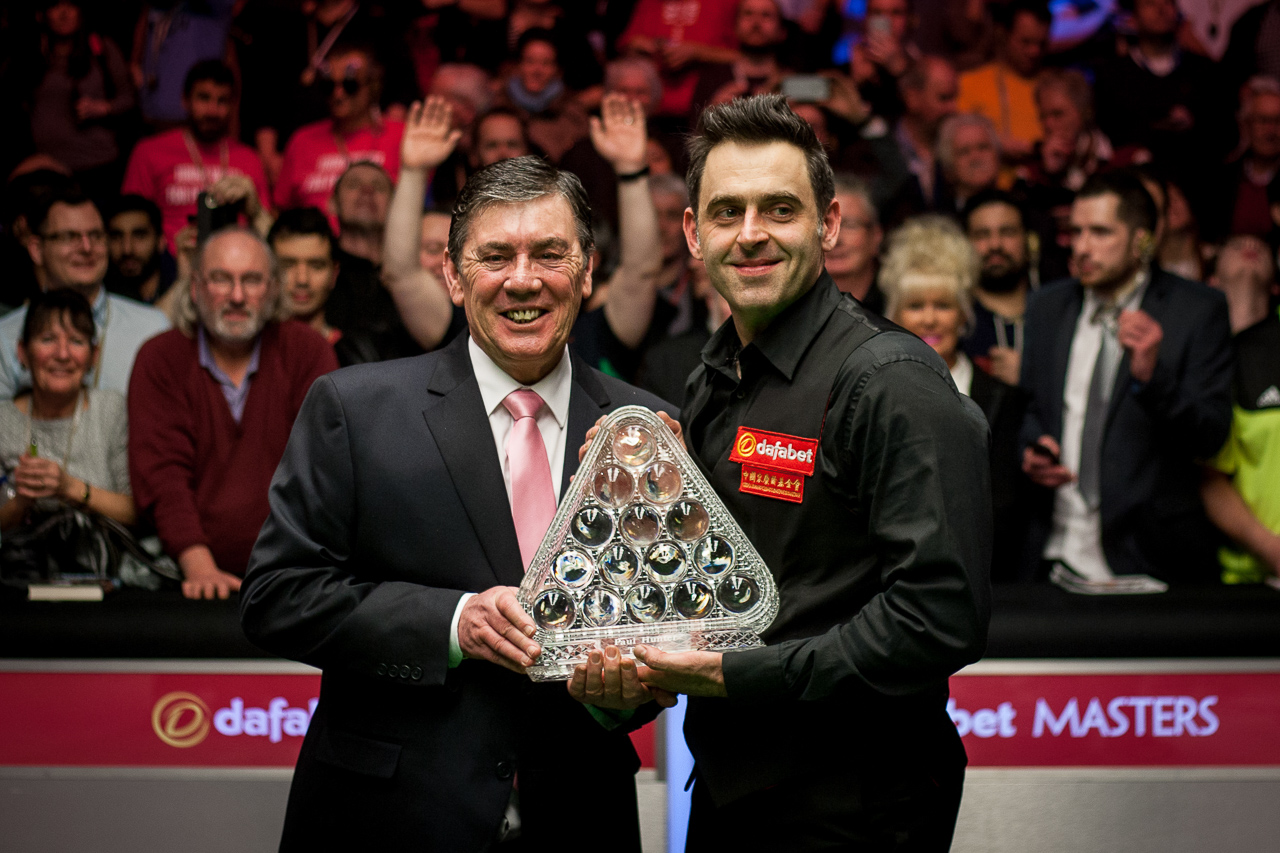 A historic seventh Masters win for Ronnie O’Sullivan made him the most successful player in the history of the tournament. However, he was made to work for the title in an absorbing final with Joe Perry.

The Rocket’s victory moved him ahead of Stephen Hendry’s previous record tally of six. It had looked like a distinct possibility he may miss out on his seventh crown when he trailed Perry 4-1. However, O’Sullivan hit back to end the first session level at 4-4. He then scooped up six of the nine frames played in the evening to take home the title.

It was also a landmark week for Perry, who was appearing in his maiden Triple Crown final. The £90,000 runner-up prize remains his second biggest pay day, after the £100,000 he received for winning the 2015 Players Championship.

“That’s probably the best win I’ve had in my life,” said O’Sullivan. “Given the circumstances with my cue tip (which he had to change during his semi-final match with Marco Fu). Yesterday it played fantastic, today I couldn’t do much with it. I just managed to hold it together under the most extreme pressure. I couldn’t play three quarters of the shots that I wanted to. I just had to hang in there and I’m proud I was able to do that.

“Joe’s a fantastic player. You don’t get to the final of the Masters without being a really top quality player. Even if everything had gone well for me, I’d still have had a massive match on my hands.” 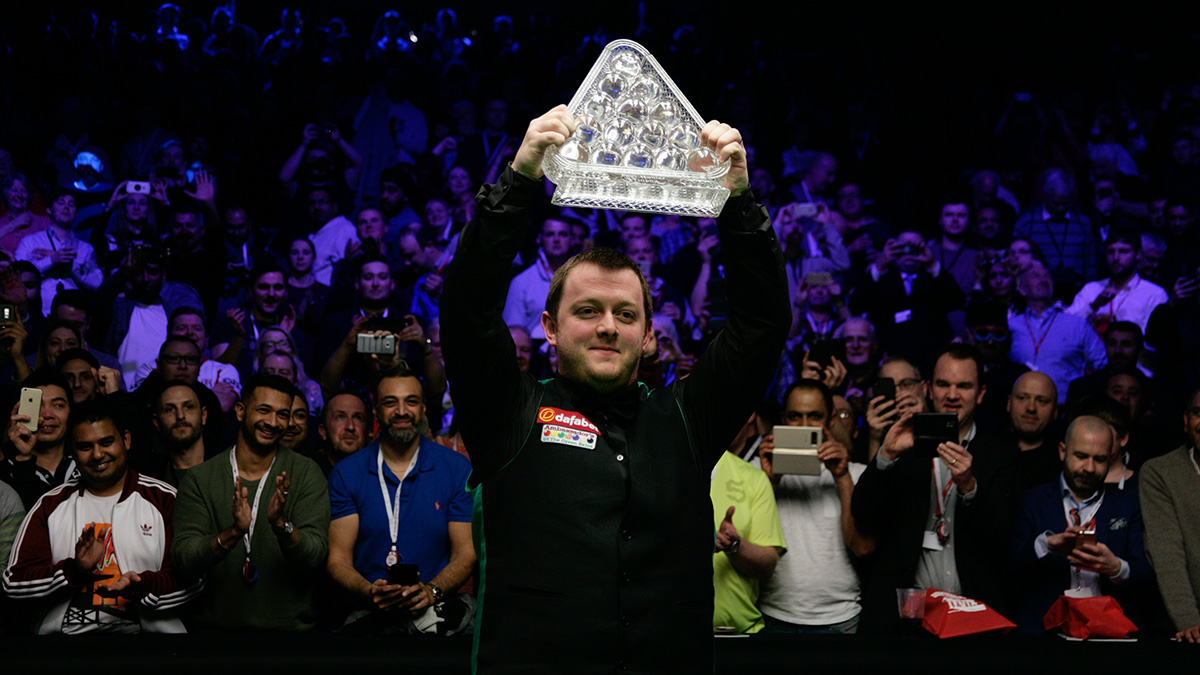 Northern Ireland’s Mark Allen landed the biggest win of his career so far when he edged out Kyren Wilson in a fiercely contested final.

Allen overcame a treacherous path just to reach the final, beating Luca Brecel, Ronnie O’Sullivan and John Higgins. It was only his second appearance in a Triple Crown title match, following his 10-8 loss against Judd Trump at the 2011 UK Championship.

The Antrim cueman’s victory meant he was only the third winner of the Masters from Northern Ireland, following in the footsteps of Alex Higgins and Dennis Taylor.

It was a heartbreaking defeat for Wilson, who was left in tears at the end. However, he was eventually able to look back on a week which saw him reach his first Triple Crown final. The highlight of the tournament was a thrilling 6-5 semi-final win over Judd Trump, where he came back from 5-2 down.

Wilson had looked ready to mount another fightback against Allen, coming from 7-5 down to reduce his arrears to 8-7 in the concluding session. However, Allen produced his steely best in the following two frames, knocking in runs of 69 and 71 to secure the Paul Hunter Trophy.

Allen said: “It has been a long time coming. I was never sure it was going to come to be honest, I have knocked on the door for so long but now I can say I have won a Triple Crown title.

“What a competitor Kyren Wilson is. He is the nicest guy you could meet and he has a great family with him too. I know what it is like to sit in that seat after losing a major final, I lost to Judd in the 2011 UK, but how far has he come in the last two years?

“He is going to be in major finals for years to come. I have felt calm all week, apart from the first session, I was very on edge. I felt like as the match went on I got stronger and I felt at ease with myself and was playing the way I had been the rest of the week.” 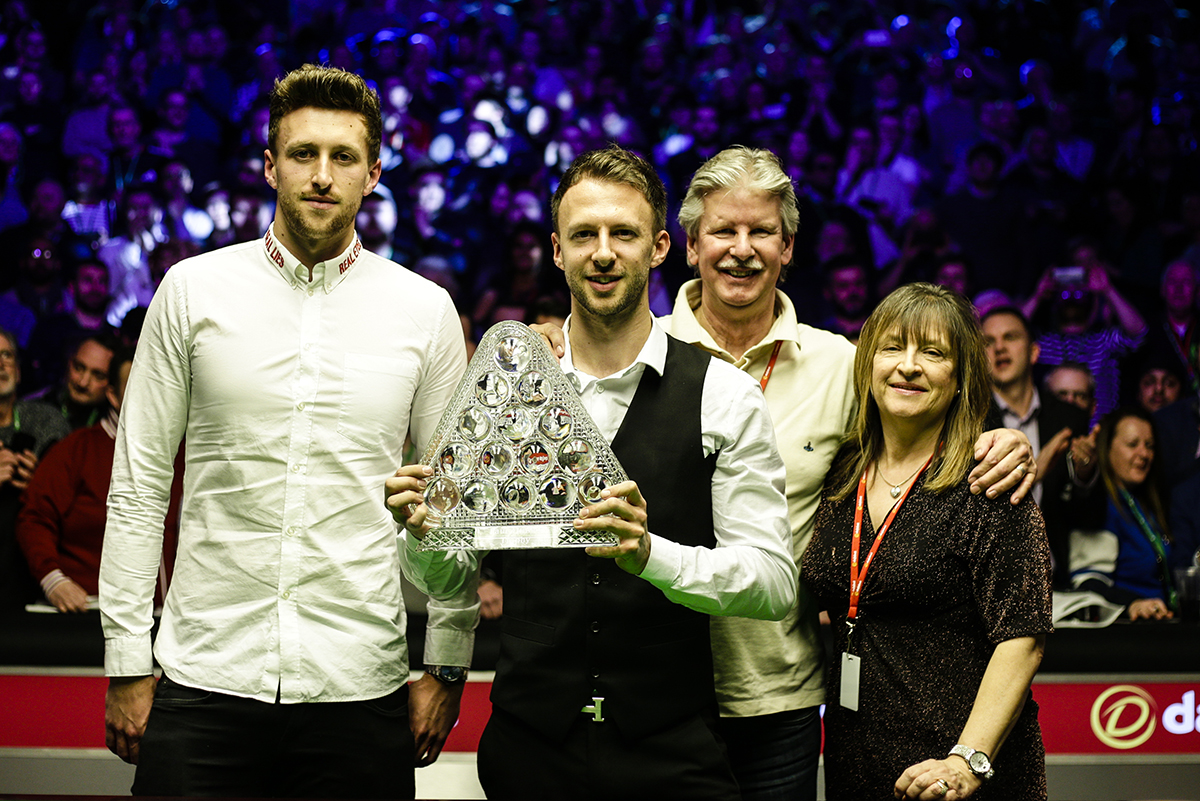 Judd Trump landed a momentous victory after crushing rival Ronnie O’Sullivan in the final to claim the Paul Hunter Trophy for the first time.

It was the first time Trump had appeared in a Masters final, but he showed he was at ease in the showpiece occasion, hammering home eight breaks over 50 during the match.

Victory saw the Ace in the Pack claim a second Triple Crown title, following his 2011 UK Championship victory. Trump would go on to win the World Championship for the first time just a few months later, beating John Higgins 18-9 in the final.

Trump’s win over O’Sullivan marked a recent turning of the tide in their rivalry. Since then he has won three of their four most recent meetings and leads the head-to-head standings 13-11.

He stormed to a 7-1 advantage after the first session and showed no signs of relinquishing his hefty lead when the evening action got underway, moving 9-3 ahead at the mid-session interval.

A break of 109 from O’Sullivan, his 991st career century, proved no more than a consolation. He had a scoring chance in frame 14 but made just 16 before leaving the pink in the jaws of a top corner, and Trump replied with 53 to cross the winning line.

“I was quite calm at the end. I think I played so well today that it gave me confidence throughout the whole game,” said Trump. “I believed in myself the whole way through. I knew Ronnie was going to come back a little bit tonight but I stuck with him and took my chances.

“Against Ronnie you’ve got to play your absolute best to even get close to him, so obviously I was very surprised to get a 7-1 lead. It’s been a long time since I won a massive event. It’s taken a lot of hard work, a lot of sacrifices, but I think the rewards are there because of the practice I’ve done over the past four or five months. Hopefully it’ll be a major turning point in my career and I can really kick on.” 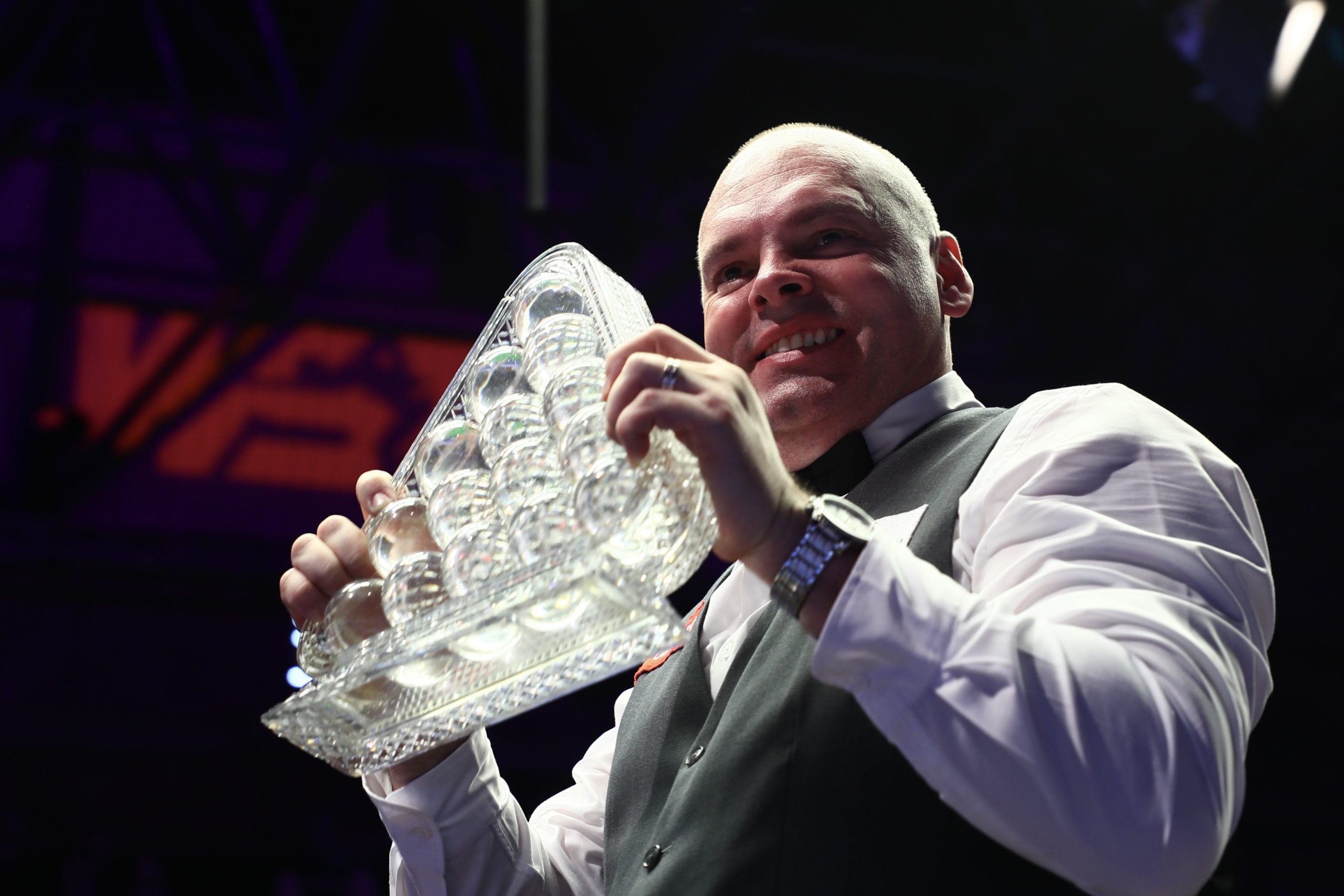 It was Bingham’s second piece of Triple Crown silverware. He famously scored an upset win at the World Championship in 2015, defeating Shaun Murphy 18-15 in the final.

Carter was competing in his first Masters final and third Triple Crown title match. He was a late entrant to the event after Ronnie O’Sullivan pulled out. Carter was runner-up to O’Sullivan at the World Championship in 2008 and 2012.

It was a match which swung back and forth. Bingham had the early advantage after emerging from the first session 5-3 ahead. However, Carter came roaring back when play resumed. Four frames in a row, including breaks of 95 and 133, saw him move 7-5 up at the mid-session.

Bingham produced his nerveless best to charge the title down in the closing stretch. Breaks of 64, 85, 58 and 88 saw him relentlessly string together four frames in a row and move to the verge of victory at 9-7.

Carter showed his resilience to respond with a run of 77 and close within a frame. However, Bingham wasn’t to be denied his moment. The six-time ranking event winner composed in a supreme run of 109, his first century of the event, to secure Masters glory.

“To get my hands on that trophy, finally, means everything,” said Bingham. “I was getting ready for the loser’s speech at the interval. Ali played brilliantly and it would have been fitting him getting his hands on the Paul Hunter Trophy. I had a coffee and a Mars bar and it seemed to calm me down. Ali missed a couple and I went from strength to strength. 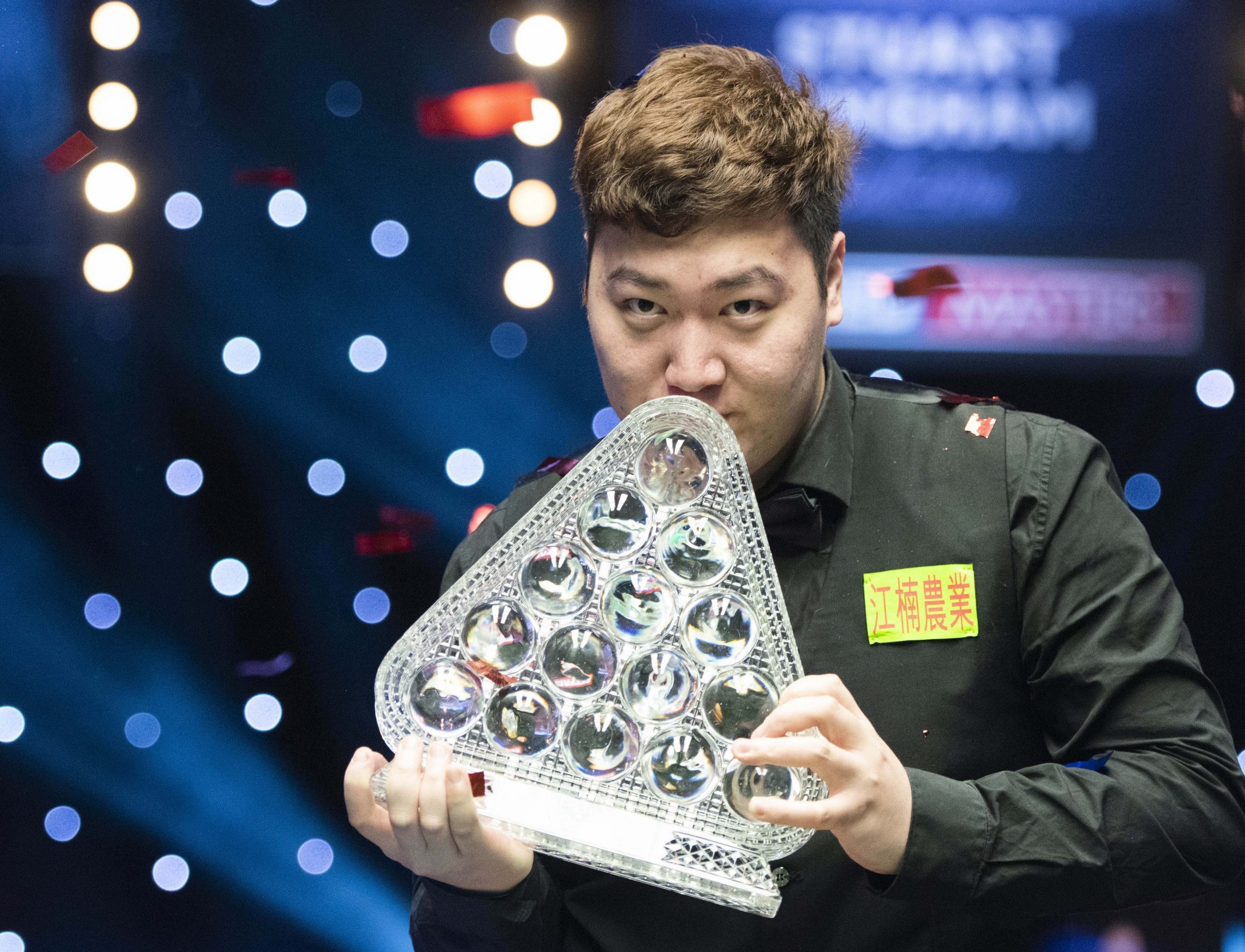 China’s Yan Bingtao stunned the snooker world by claiming the Masters title at the first time of asking, with a superb win over John Higgins.

Debutant Yan, who was 20 years old at the time, became the youngest winner of the Masters since Ronnie O’Sullivan claimed the title at the age of 19 in 1995. He also became the second Asian player, after compatriot Ding Junhui, to lift Triple Crown silverware. Zhao Xintong has since followed in their footsteps by winning last month’s Cazoo UK Championship.

The prodigious talent showed mental toughness to reach the final, beating Neil Robertson, Stephen Maguire and Stuart Bingham, all by 6-5 scorelines, before getting the better of two-time Masters winner Higgins.

It was a difficult defeat for Higgins to take. The Scot hasn’t lifted Triple Crown silverware since winning the World Championship back in 2011. He last won the Masters in 2006, when he defeated Ronnie O’Sullivan 10-9 in an epic final.

Higgins led 5-3 after the first session and continued to look strong as the closing stages got underway, moving 7-5 ahead. However, Yan kept his composure to battle back into the match.

“My heart was beating out on the last red, I was so close to the winning line and he kept fighting. That was the moment that I felt the most pressure,” said Yan.

“I just told myself to keep working and not give up. I controlled the cue ball. I just slowly finished the last three or four balls after potting the red.

“My mum and dad were watching on TV. They probably didn’t sleep tonight. They have always told me to never give up and to enjoy my life.”