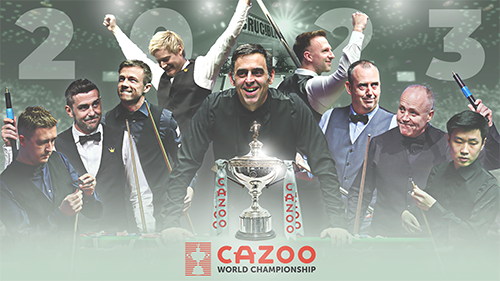 Cazoo, Europe’s leading online car retailer, which makes buying and selling a car as simple as ordering any other product online today, has become the title sponsor of snooker’s biggest tournament and one of the most prestigious events on the sporting calendar, the World Snooker Championship.

Under a new multi-year agreement, the Cazoo World Snooker Championship will see prominent Cazoo branding on the main set, players’ waistcoats and interview and media conference backdrops and will have extensive live coverage on BBC, Eurosport and a range of broadcasters across the globe.

The Cazoo World Snooker Championship is the sport’s most celebrated event with a history dating back to 1927. Since 1977 it has been staged at the iconic Crucible in Sheffield, where it will remain until at least 2027. Running for 17 days, the 2023 event will take place from April 15 to May 1.

Cazoo was founded in 2018 by renowned British entrepreneur Alex Chesterman and has already sold over 65,000 cars in the UK since its launch just over two years ago as consumers have embraced the selection, value, transparency and convenience of buying and selling used cars fully online. Cazoo has also launched in France and Germany and now has a team of over 5,000 across the UK, France, Germany, Spain, Italy and Portugal.

Alex Chesterman OBE, Founder & CEO of Cazoo said: “We’re excited to be expanding our partnership with WST and Matchroom to include the World Snooker Championship, the third and final triple crown event. This deal will help to further grow our audience as we continue to build Cazoo and deliver the best car buying and selling experience across the UK and Europe.”

Steve Dawson, Chairman of WST said: “This is a fantastic announcement for our sport as we welcome Cazoo as the title sponsor of our greatest tournament, the World Snooker Championship, for the first time. This is an event which generates a massive amount of interest and excitement on a global scale. A worldwide audience of 500 million watches the action from the Crucible on television, while in the UK it is among the best loved fortnights of the sporting year. We are now working with Cazoo on a wide range of our biggest tournaments throughout the season and we look forward to continuing to build this successful partnership for years to come.”