This year marks the 45th running of the Cazoo UK Championship, a tournament steeped in history. There have been countless moments of drama since Patsy Fagan won the inaugural event way back in 1977 and recent editions of the tournament have provided more than their fair share of thrills.

To bring you up to date with the most recent happenings in the rich history of the UK Championship, here is a flashback to the previous five finals. 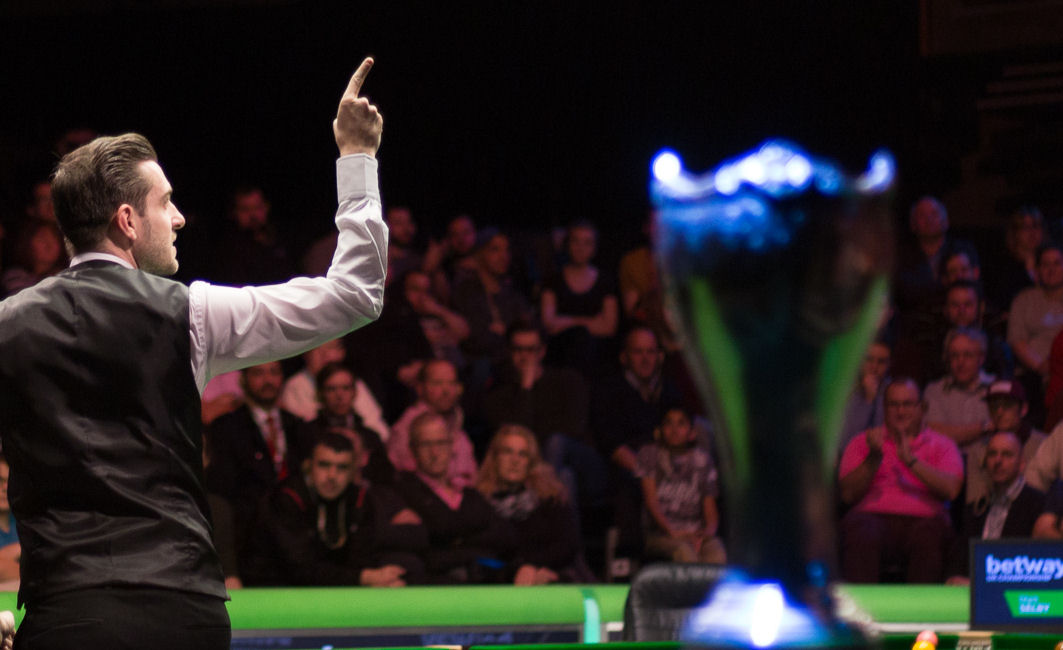 The Jester from Leicester had already won the second of his four world titles earlier that year, when he beat Ding Junhui 18-14 at the Crucible. That meant Selby became only the sixth player to win the World and UK Championship titles in the same calendar year.

Selby had led 6-2 after the opening session, but that gap was quickly closed when the evening action got underway. O’Sullivan clocked up five of the next seven frames to come roaring back into contention at 8-7.

However, Selby wasn’t to be denied and closed the match out in style. Back-to-back century breaks of 134 and 107 saw him run out the 10-7 victor.

“It feels amazing,” said Selby. “Just to win the UK is a great feeling anyway, but as I said when I won the world for the first time, if I was to go on and win a big tournament I’d like to play Ronnie in the final and to go on and win. I have done that in the Masters, World and the UK so that is a fantastic feeling.”

Ronnie O’Sullivan’s victory in 2017 was a record equalling feat on two very significant fronts. It was a sixth UK crown for O’Sullivan, bringing him level with Steve Davis’s then record total. It was also his 18th Triple Crown victory, which equalled a record held by Stephen Hendry since 1999.

The win capped off a golden seven-week spell for O’Sullivan, in which he banked nearly £450,000 in prize money. He also won the English Open in October of that year and added the Shanghai Masters title a month later.

Shaun Murphy, who was UK Champion in 2008, missed out on the chance to win the event for a second time. He also lost in the final against Mark Selby back in 2012.

The pair were locked level after the first session at 4-4 and it was all set for a grandstand finish. However, O’Sullivan surged to victory with a sublime showing in the evening. Breaks of 75, 104, 76, 103, 86 and 59 saw him scoop up six of the next seven frames to get over the line.

“I just went out there and tried to be professional and ignore how I was feeling,” said O’Sullivan, whose only defeat in a UK Championship final came in the previous year against Selby.

“It’s just nice to win another title, though I don’t even really feel excited by it, I don’t get too emotionally involved now. Playing snooker keeps me out of trouble, if I wasn’t playing I’d probably be going off the rails. As long as I play snooker it’ll keep me reeled in.” 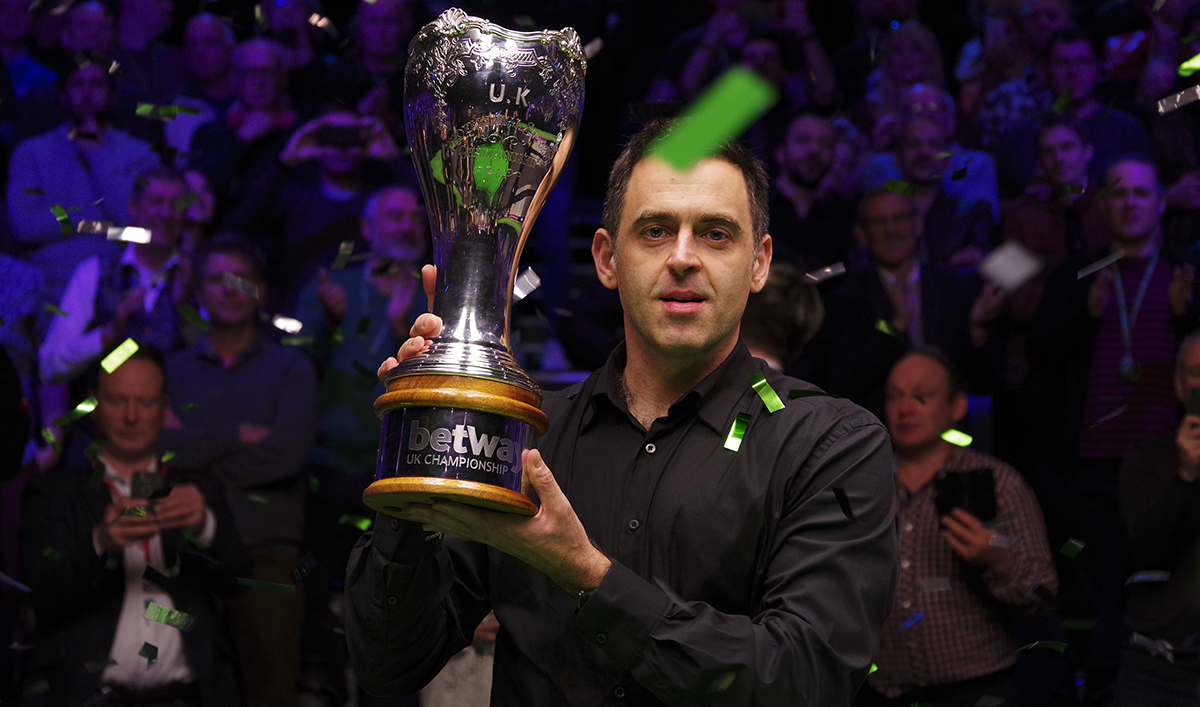 After receiving the trophy O’Sullivan jumped over the barriers around the table to share the moment with the crowd, his friends and fans. Having said he wasn’t excited by the previous year’s victory, it was a rare showing of joy from O’Sullivan at his extraordinary achievement.

The win was a continuation of a phenomenal start to the season for O’Sullivan who had also won the Shanghai Masters and the Champion of Champions. In the five tournaments he contested to that point in the campaign, he had won 26 of the 28 matches he played.

O’Sullivan led 6-2 after the opening session of this final and wasn’t troubled during the evening’s play. Leading 9-6, he fired in a match winning break of 76 to secure the historic victory.

“It was a pleasure to be a part of that final, and if I had lost I would have been devastated,” said O’Sullivan. “It’s about cherishing these moments and enjoying them. Mark is a fantastic competitor, he has got great bottle and courage and I think he’ll win the world title. He has that ingredient and you need that at Sheffield.

“To beat Hendry’s 18 majors, to get to 19 is crazy. I don’t want to stop there, I want to put some distance between me and the next players to make it harder for them to catch me.

“I was emotional at the end because I’m playing for the fans and I want to give them enough to smile about. It’s pay back time, I owe it to them. I have a special rapport with them, I’m the people’s player and I understand that. They go through it with me, when I get victories they feel it with me.”

The Chinese superstar has also gone through 27 months without a ranking title of any sort, going back to his win at the 2017 Yushan World Open. His victory in York was the 14th ranking title of his career to date, he is yet to add to that tally. It was Ding’s third UK Championship title having also lifted the famous trophy in 2005 and 2009.

Ding led 5-3 after the opening session and produced sparkling snooker to protect that advantage in the evening. Breaks of 83, 73, 71, 131 and 114 were enough to see Ding over the line.

“I have had to wait a long time to lift a trophy again, and this is a big one,” said Ding. “It has been an amazing week and I have played fantastic snooker. It means everything to me. When Stephen came back to 8-6 he looked strong, but I stayed calm and waited for my chances.

“I believe in myself. All week my head has been clear and strong and happy. I still want to win the World Championship but this is also a big one. For the last two years people have doubted me, asking whether I would win again. Now I believe I can win more, and this is a good start.

“I believe more and more parents in China will watch snooker and follow my matches, their children might not know snooker yet but they will get interested and want to play.” 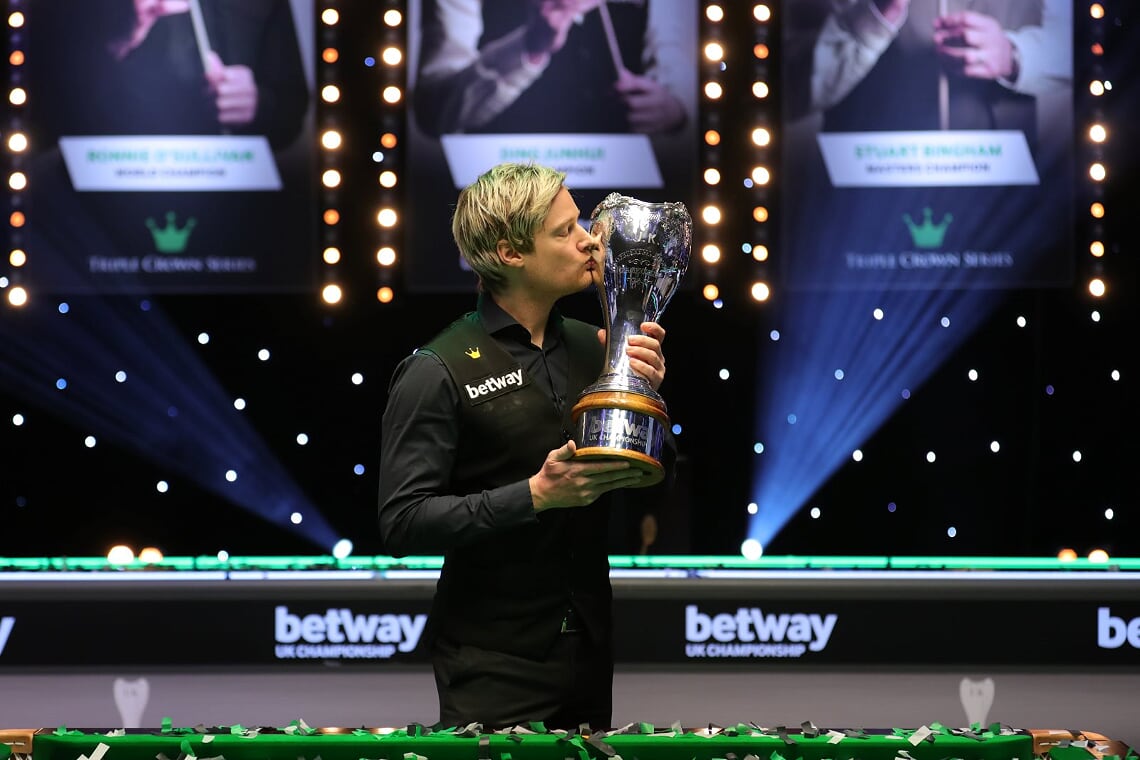 With the coronavirus pandemic plunging the world into uncertainty, the circuit moved behind closed doors in Milton Keynes. Despite the lack of fans, Neil Robertson and Judd Trump put on one of the greatest ever UK finals.

The pair were inseparable throughout the final and there was never more than a frame between them.

It came down to a nerve shredding decider with the clock close to 1am. The final frame had lasted 66-minutes when Trump found himself just two pots away from glory. However, he spurned a chance on the final pink and Robertson stepped up to deposit it and claim the title and become a three-time winner of the UK Championship.

Robertson, overwhelmed with relief after the dramatic win, said: “I would have been devastated to lose, I don’t know how I would have slept for the next few nights. Judd will be gutted but he was very gracious in defeat.

“Both of us must have had ten times in the last frame where we thought we were going to win. It was a titanic struggle, we both refused to lose. It wasn’t the greatest quality, but sometimes finals are so bad they are good. We were missing pots that club players would have potted and fluking snookers out of snookers. Maybe people will be in the club tomorrow trying to replicate those shots.

“To beat Judd, who is the best player in the world and has been so consistent in finals over the last few years, it’s up there with anything I have achieved before.”