Coral To Donate Cash For Centuries To Jessie May


Coral, title sponsor of snooker’s World Grand Prix, Players Championship and Tour Championship, are set to donate £100 for every century break made during the 2020 Coral Series to WST’s official charity Jessie May Children’s Hospice at Home. 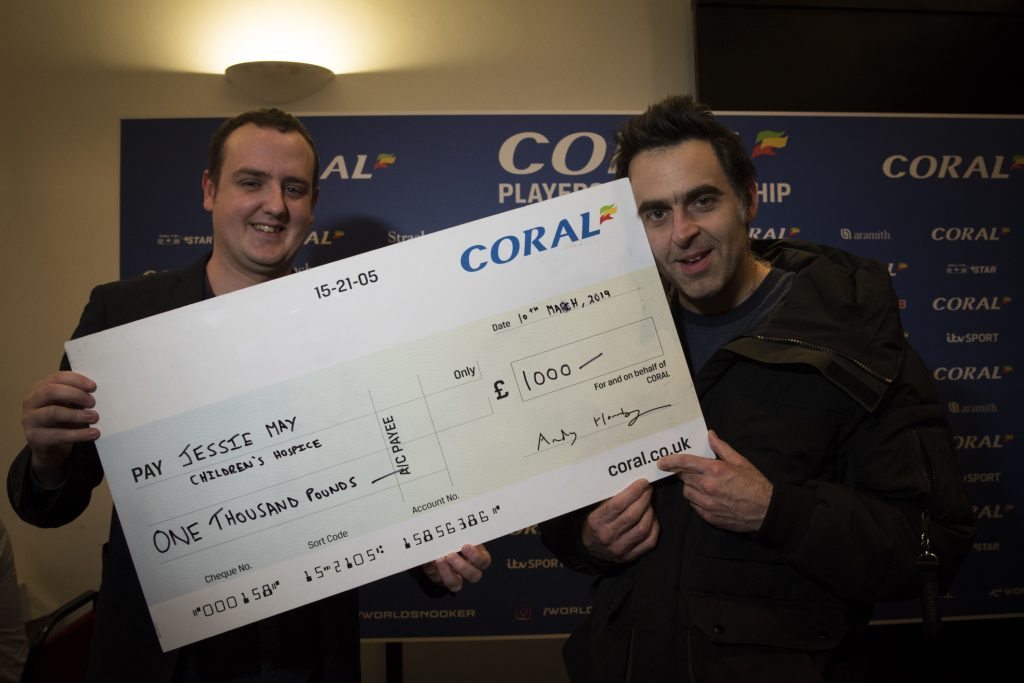 Coral made a donation last year totalling £8,100 and it is hoped that a similar amount can be raised again for a fantastic charity which provides a hospice at home service for terminally ill children, offering care to families in the Bristol area.

The Coral World Grand Prix is the first event in the series, running from February 3 to 9 at Cheltenham Racecourse. The leading 32 players on snooker’s one-year ranking list will contest the trophy.

The field is then cut in half to 16 players for the Coral Players Championship from February 24 to March 1 in Southport, and then only the top eight go through to the Coral Tour Championship in Llandudno from March 17 to 22. All three events are televised by ITV.

And every century throughout the Coral Series will add £100 to the donation tally.

“We are once again delighted to support the Jessie May Children’s Hospice at Home charity throughout the Coral Series,” said Coral’s PR manager, John Hill.

“With the 32 leading players on snooker’s one-year ranking list involved from the start, we are sure to see lots of centuries across the three tournaments, and we will be cheering every single one on,” added Hill.

Steve Wiltshire, Jessie May Care Team Leader, added: “This is amazing news, with donations like this from Coral we can continue to support families where a child is coming towards the end of their life. It will enable us to continue support families, as well as provide bereavement support for up to five years after the child’s death.

“This support is vital to our families, as we are the only service in the South West to provide this length of bereavement support. Thank you to everyone at Coral, and let’s hope that all the players are on form so that Jessie May can continue our great work!”

Jessie May has been WST’s charity partner since 2016. For more information visit www.jessiemay.org.uk