“It was one of those stomach-dropping moments which you only experience a few times in your life.”

Anthony Hamilton remembers the anguish he felt when he arrived in Spain for the recent BetVictor Gibraltar Open to find that the cue he had used for 34 years had been snapped. He remains hopeful that it can be fixed but realises the incident could affect the rest of his career. 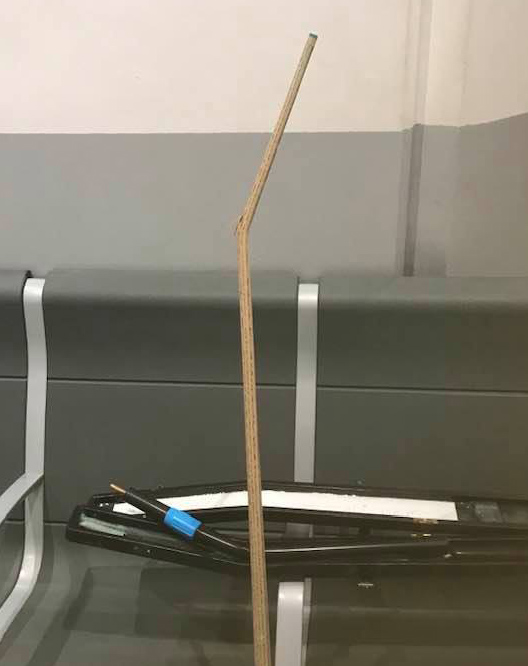 Warning: Snooker players may find this image upsetting. Hamilton posted this picture on Facebook, showing how badly the cue and case were broken.

The cue was broken in transit despite the fact that snooker players use robust ski tubes to carry their cue cases. Since 2001 they have not been allowed to take cues into the cabin on aeroplanes.

Hamilton flew to Malaga airport the day before the Gibraltar tournament started, but when he got to baggage collection, things took a turn for the worse

“When I picked up my ski tube I could see that it had a bit of damage on the outside, but nothing major,” he explains. “I was going to head outside to get  a taxi but I thought I’d better check the cue. I opened the tube and found the case and cue snapped and bent about 30 degrees.

“I have spoken to the airline but I can’t find out how it happened. It takes a huge amount of force to bend those ski tubes so it can’t have just been someone dropping it. Maybe it got trapped between a wall and the car that takes the baggage to the planes – something like that. Kacper Filipiak was there and his tube was also damaged though his cue was fine.

“I decided to pull out of the tournament straight away and fly home the next day. There are only two other players whose cues I could have borrowed  and had any chance of winning – Martin O’Donnell and Alfie Burden – but they were playing on the Saturday so not arriving until the Friday which was too late. So there was no point in me trying to play. 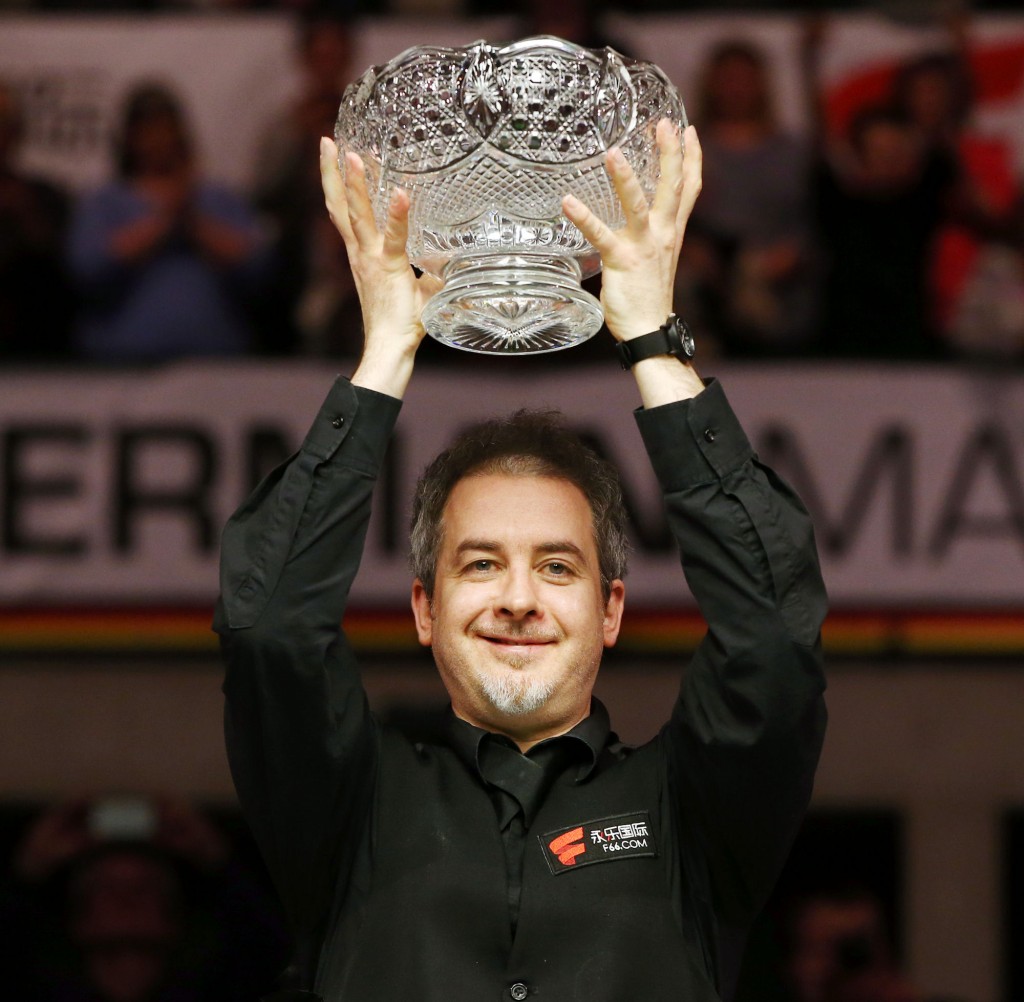 Hamilton was a shoo-in for ‘best player never to win a ranking event’ until he landed the 2017 German Masters.

“I will get a bit of money from my insurance company but obviously the cue itself is irreplaceable. I bought it when I was 14, six months after I started playing, for about £60. It has never been the best cue in the world, but it was my cue, and it’s the only one I’ve used since.

“I think it’s harder for players of my generation to change because the older cues are slimmer and less robust. The modern cues all tend to have a butt diameter of 30mm while mine is 27.5mm. You could scour the planet and you’d never find another the same as mine.”

Fortunately for the Sheriff of Pottingham, he can count ace cue maker John Parris among his band of merry men.  “John was actually on holiday at the time but he saw the picture I posted on Facebook and he texted me straight away,” said Hamilton, who turned pro in 1991. “He is trying to fix my cue and he has a few others for me to try. I am massively grateful to him for what he has done to help me.

“When it first happened I thought there was no chance of fixing it because it wasn’t a clean break and there is a lot of splintering. But cue makers like John are miracle workers. Ali Carter’s cue had a similar break a few years ago and it was fixed and he was able to play with it afterwards. So I’ll have to wait and see if mine is ok, if not I’ll try to find one that suits me, but getting used to it will take time.”

This is not the first time Hamilton has had to face a serious challenge to his career. He has a chronic neck condition which often leaves him unable to play or practise, and last summer he had eye lens replacement surgery to improve his vision. 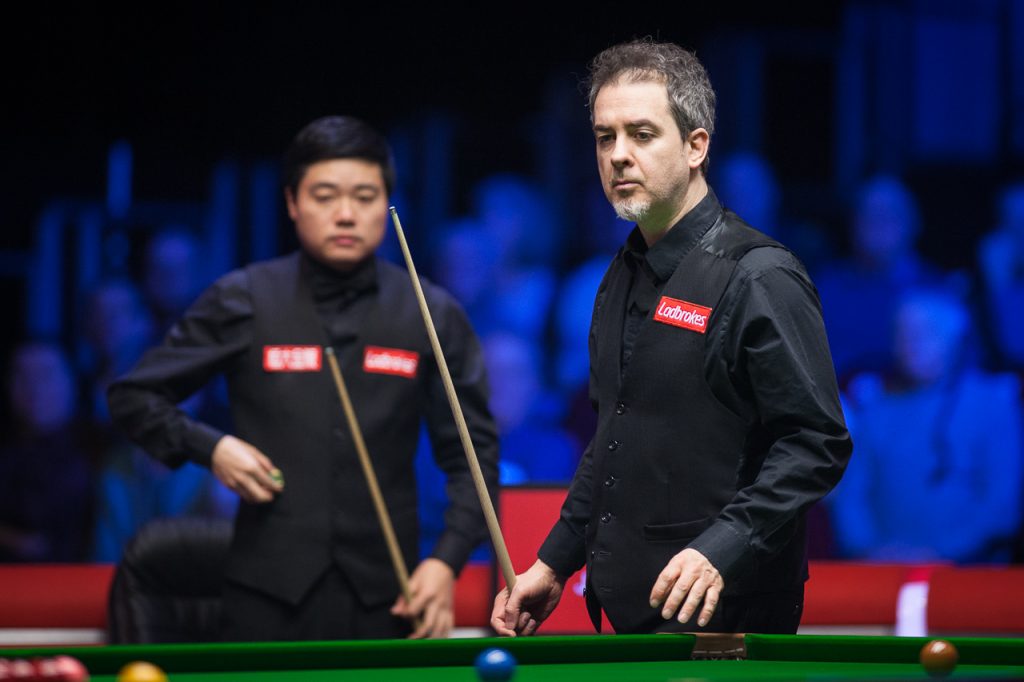 The world number 48, whose highest ranking is tenth in 1999, accepts that his best years are behind him. “If I was 30 years old now and a dangerous player I’d be distraught, in turmoil. But the fact is I’m 48 and not very good any more, so it’s not as if I have a great standard to get back to,” he said.

“I haven’t had a bad season but these days I win matches through experience and graft – there is more than one way to skin a cat. Every now and then I have a good week where things come together, but most of the time it’s like pulling teeth. I seem to play better on the TV tables because the lighting suits my eyes but you need to win matches on the outside tables to get there. I still enjoy the game and I will keep going.”

All snooker players are taking an enforced hiatus from competitive action due to the coronavirus pandemic. The Betfred World Championship qualifiers would have started on April 8, but dates have yet to be rescheduled. Hamilton is confined to his home in North London and is prepared to hunker down.

“I am a film geek but I have seen so many movies I’m struggling to find new ones to watch,” he added. “I’ll try to catch up on some classics. I don’t have a particular favourite genre or era – I just like anything good. Manchester By The Sea is one from recent years that I really admired, and Leviathan is another.

“I have a Playstation and a few games like World Rally Championship. And I’ll do some indoor cycling and yoga to keep fit. Everyone has to be sensible and stay inside as much as possible until the time comes when we can move on. “