Liam Davies, who became the youngest ever winner of a Betfred World Championship match earlier this week, followed that up with a 6-5 second qualifying round victory over Fergal O’Brien on Thursday night and is now just two more wins away from a place at the Crucible.

Welshman Davies, who turns 16 in June, beat Aaron Hill in the opening round in Sheffield to set a new record in the 95-year history of the event. 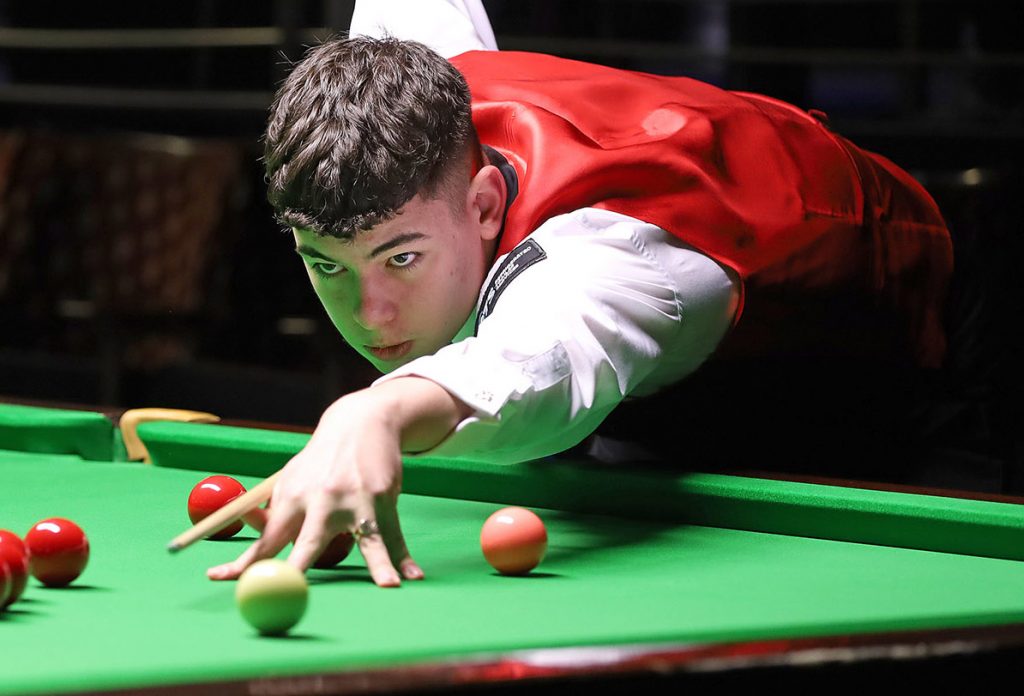 His match against former British Open champion O’Brien started on Thursday morning and was hauled off at the end of the session when Davies led 5-4. They had to wait until late evening to return, then O’Brien won a 51-minute frame for 5-5. But Davies got the better of a 42-minute decider to continue his run. He’ll face Jordan Brown on Saturday evening.

“I am over the moon,” said Tredegar’s Davies, who reached the semi-finals of the recent WSF Junior Championship to earn a place in the qualifiers in Sheffield, as one of 16 amateurs handed spots by the WPBSA. “It feels as if the world has been lifted off my shoulders. When he came back to 5-5 I thought ‘here we go’ so I was delighted to win the last frame. I took a few shots on in the last frame and if they hadn’t gone in, someone would have said to me ‘what are you doing, you idiot!’ But thankfully they went in and I’m through to the next round.

“I booked out of the hotel this morning so this afternoon I went back to the hotel to check in again then went to sleep for a few hours because I knew we wouldn’t be playing until late tonight. I’m glad I’ve got a day off tomorrow.

“After my first match I had no idea I had become the youngest winner. I was flicking through Facebook and I saw the story there. I’m trying not to think about getting to the Crucible, I’m just trying to stay in the moment and pot the balls in front of me. If you start trying to win, that’s when the pressure comes. I can’t thank (coach) Lee Walker enough because he has been with me from the start and I definitely wouldn’t be here without him.”

The result meant tour relegation for Irishman O’Brien and he will have to go to Q School if he wants to battle to keep his tour card.