Ryan Day made a superb break in the crucial last frame to beat Kyren Wilson 3-1 and top Group 12 at the Matchroom.Live Championship League.

Welshman Day goes through to the Group Winners’ phase next week. It has been a disappointing season for world number 36 Day by his standards – he has played in 13 ranking events and reached the last 32 of just one of those. But he still has time to turn it around.

Wilson, sporting a grey hairstyle, and Day came into the final match in the group with identical records, both having beaten Alfie Burden 3-0 and drawn 2-2 with Chen Feilong. 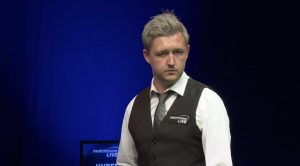 Breaks of 91 and 55 put Day 2-0 ahead, before Wilson pulled one back, and his 111 in the third frame was the highest break made in the group, which meant he would have topped the table if he had drawn 2-2 with Day.

And world number eight Wilson had an early scoring chance in frame four, but made just 16 before running out of position. Day knocked in a long red and went on to make 86 to book his place in the second phase, when the 16 group winners will return to Milton Keynes.

“It looked like it was going to come down to that last match all day long,” said Day. “When we were both focused and wanting to win the group, you saw the best match of the day. In the end it was basically a deciding frame and I held myself together.

“I think I can speak on behalf of all the players who have played so far by saying there has been a tremendous amount of work and effort gone into putting the event on and it is very professionally run.”

The action continues on Thursday with Mark Selby, Liang Wenbo and Gary Wilson among those on the baize.