World number 23 Scott Donaldson believes he can use his nerve shredding experience at last year’s Betfred World Championship qualifying, when he returns to Sheffield later this month.

The Scot came through the 2019 qualifying process to make his Crucible debut. However, he was put through the wringer in his final round tie with China’s Lu Ning.

Donaldson appeared to be coasting to victory at 9-4 up, but that advantage slipped through his fingers as Lu fought back with five frames in a row to force a decider. Perth’s Donaldson steeled himself and produced a break of 62 to help secure an eventual 10-9 victory.

Having stood up to some of the most severe pressure the qualifiers have to offer, Donaldson now hopes he will be even better equipped to deal with the unique mental strains the event brings.

Donaldson said: “I’ve never felt anything like that. It is an absolute disgrace how much goes through your mind in that situation. I hadn’t experienced that before, because it was the first time that I have ever made the last round. It was a good feeling to get over the line. I know if it goes close then I’ve done it before, so I can do it again.

“In parts of that match I was thinking I might not ever get the chance to be at the Crucible again if I lose. Now that I have been there, it is definitely going to put less pressure on me. They are still really big matches at the qualifiers, but there will be less pressure involved.

“The break in the last frame was definitely the best of my career so far. I’ve made a lot higher and more difficult breaks, but it was the timing of that one. I didn’t feel inside as if anything like that was going to happen. I think I just got to the stage where I couldn’t twitch anymore. I’d done everything I could possibly do to throw it away, so I just let my arm go.” 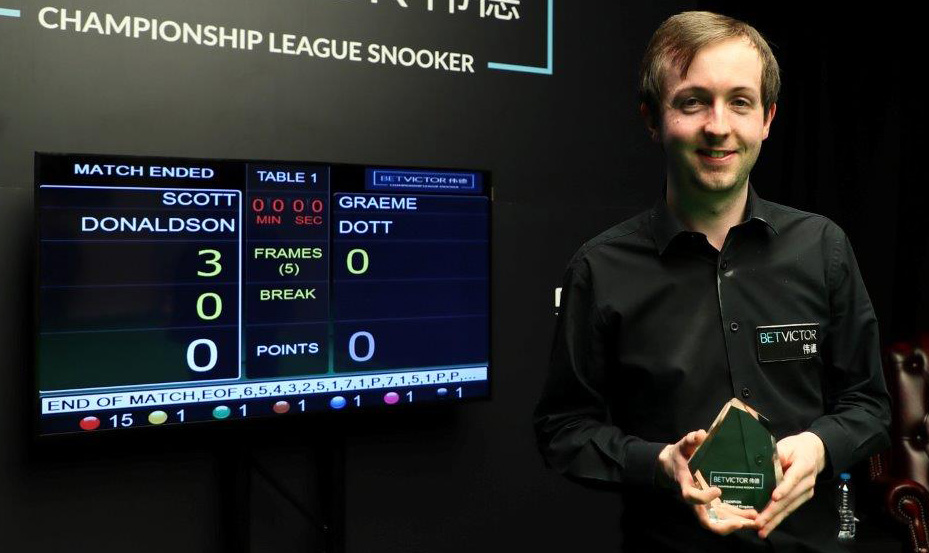 Donaldson with the Championship League Trophy.

Following his Crucible qualification, Donaldson was pitted against three-time ranking event winner Kyren Wilson in the draw. It was a match which didn’t go Donaldson’s way, losing 10-4, but again it was an experience that the 26-year-old believes he will learn from.

“It feels surreal the first time there,” said Donaldson, who won this season’s earlier edition of the Championship League. “The Crucible is tiny in reality, compared to how it looks on the television. It is the biggest event in snooker and one of the biggest sporting events worldwide. So it was good to be part of it. I didn’t want to lose in the first round, but it was against a very good player in Kyren and there is no shame in losing to him. I don’t feel like I played terribly either. I have confidence if I get there again.

“I think over 90 percent of players will probably lose their first match there. But you gain a lot of good mental memories. It is natural to go there and feel different. It should help me for next time.”