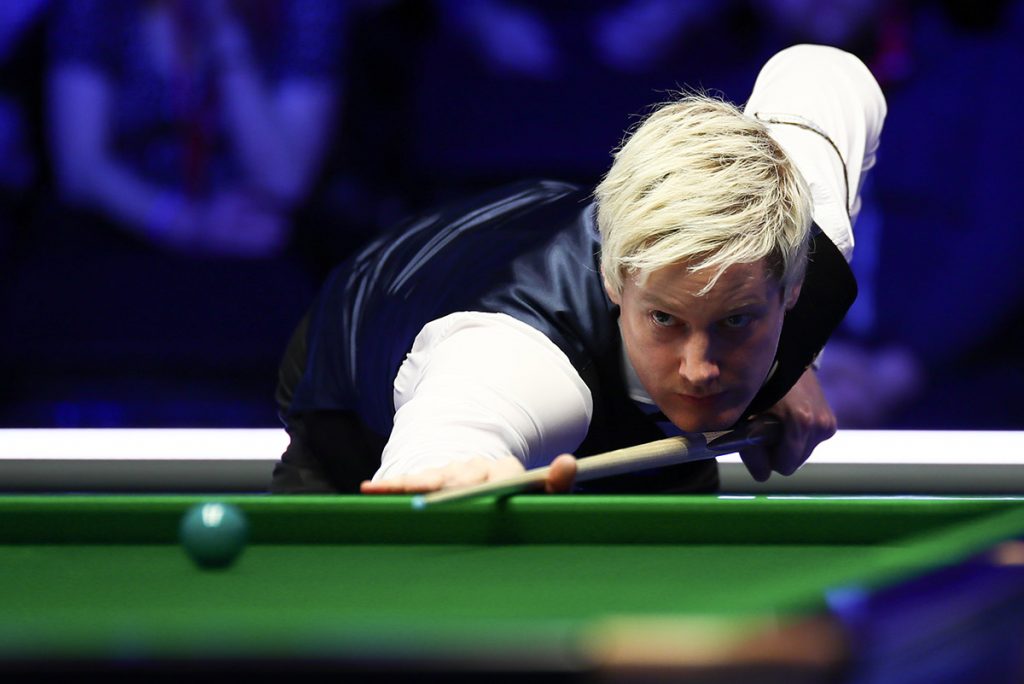 Dott, gritty determination personified, made a fight of the final in Cheltenham as he closed from 9-5 to 9-8, before Robertson got over the line to take the £100,000 top prize and win this event for the first time.

The 37-year-old Australian continues his fabulous streak of form as he has won 18 of his last 19 matches in ranking events. He landed the European Masters title in Austria two weeks ago, then reached the final of the German Masters where he was runner-up to Judd Trump.

Confidence and self-belief have never been in short measure for the left-hander but it’s hard to argue against his own assertion that he is playing the best snooker of his career.

Tonight’s victory gives Robertson his 18th ranking title, moving him ahead of Mark Selby on the all-time list into sixth place on his own, behind Ronnie O’Sullivan (36), Stephen Hendry (36), John Higgins (30), Steve Davis (28) and Mark Williams (22). 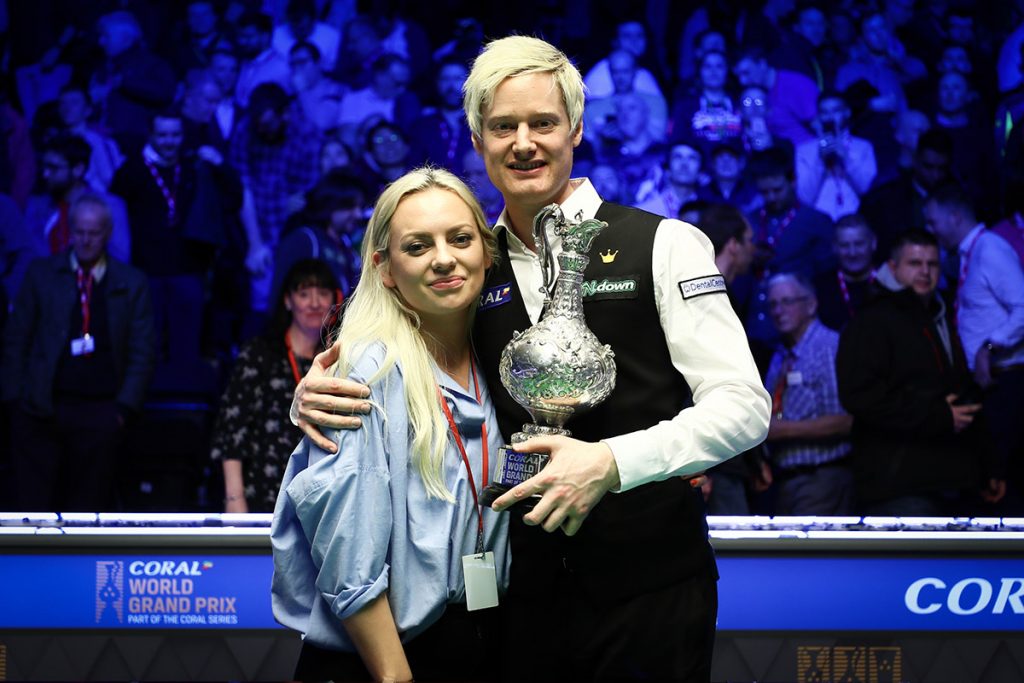 With three months of the season still to go, his earnings for the 2019/20 campaign now total £508,100. He remains second in the world rankings but closes the gap on Judd Trump, while on the one-year list he is up to third and now looks certain to qualify for the other two events in the Coral Series.

Scotland’s Dott had hoped to win his first ranking title since the 2007 China Open; a 13-year gap would have been the longest in snooker history. He battled hard all the way but left his fight-back too late. The £40,000 runner-up prize lifts him to seventh on the one-year list.

Trailing 5-3 after the first session, Dott made a break of 62 as he took the opening frame tonight, then Robertson went 6-4 up with a 107. Dott took the 11th with a run of 88 but botched his break-off at the beginning of the 12th and Robertson punished him with a 142 total clearance, the highest break of the tournament.

Larkhall’s Dott potted the opening red of frame 13 but then missed a tricky brown to a centre pocket, and Robertson took advantage again as a run of 69 made it 8-5. A long red at the start of the 14th set Robertson up for a 101, his 699th career century, and he looked set for victory in the next until he missed the green a baulk corner, leading 43-13. Dott made a gritty 47 clearance to keep his hopes alive. 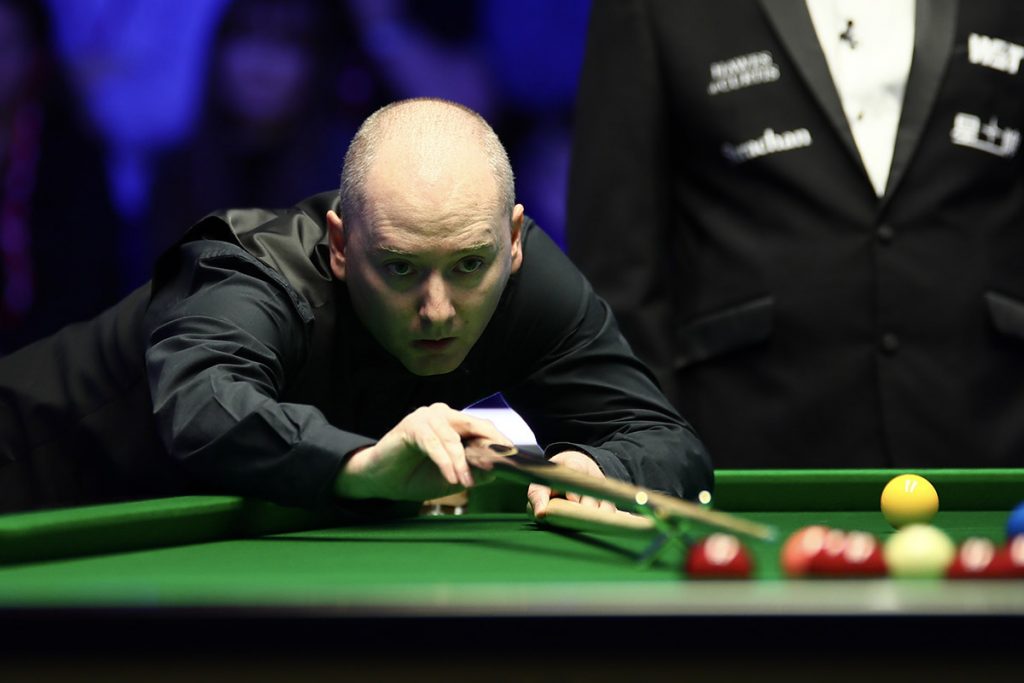 Dott led 38-30 in the 16th when he trapped his opponent in a tough snooker on the last red, and from the chance that followed he added 17 to close to within two frames at 9-7. The fight-back look over in the 17th when Robertson made a 69 to lead by 43 points with one red left. But, remarkably, Dott got the three snookers he needed on the colours, and settled a safety exchange on the black with a thin cut into a baulk corner.

In a scrappy frame 18, Dott trailed 42-13 when he missed a tough long pot on the third-last red. Robertson scored 14 points to leave his opponent needing snookers, and this time Dott’s Houdini act was out of tricks.

“At 9-5 I was cruising and it was looking like one of my best performances in a final,” said Robertson, who has now won 11 of 17 meetings with Dott, including the 2010 World Championship final. “As Graeme came back I slowed down because I was so tired. Having reached three finals in a row I would have been very disappointed to lose two of them so that put a bit of pressure on me.

“Graeme kept fighting all the way and when the frames go scrappy, he is a master in that department. It’s great to see him back playing well and I’m sure he’ll win more tournaments.

“This is absolutely the best form of my life, I have carried on from the end of last season when I reached four finals in a row. I am always looking to improve.”

Robertson now heads to Cardiff to defend the title at the ManBetX Welsh Open – he is back on the baize on Tuesday. “How long can I keep this going?” he pondered. “I am really scraping the bottom of the barrel now energy wise. In Wales I’ll be playing to win quick or lose quick.”

Dott, the 2006 World Champion, said: “At 9-5 there wasn’t much hope because Neil wasn’t missing anything. I did well to steal a few frames and make him twitch a bit. I had chances in the last frame to go 9-9. My break off shot was costing me throughout the match, I was thinking of just rolling into the pack. I was leaving a red for him every time.

“It’s a good week for me. I’m always going to complain because I want to win. I think I can still win tournaments if I play like that and don’t run into someone playing like a machine in the final.”