Snooker commentator and journalist David Hendon remembers Doug Mountjoy, who has died at the age of 78.

Doug Mountjoy was a pure snooker man. The game was in his blood. It took him from the Welsh coalfields to national prominence. It gave him the chance to travel, to earn substantial money and to ride an emotional rollercoaster of sporting highs and lows. Most of all, though, he just enjoyed playing.

In his prime he looked like one of snooker’s tough guys, a man who could hold his own in a battle, and his resilience allowed him to extend his career long past the point at which it appeared to be over. 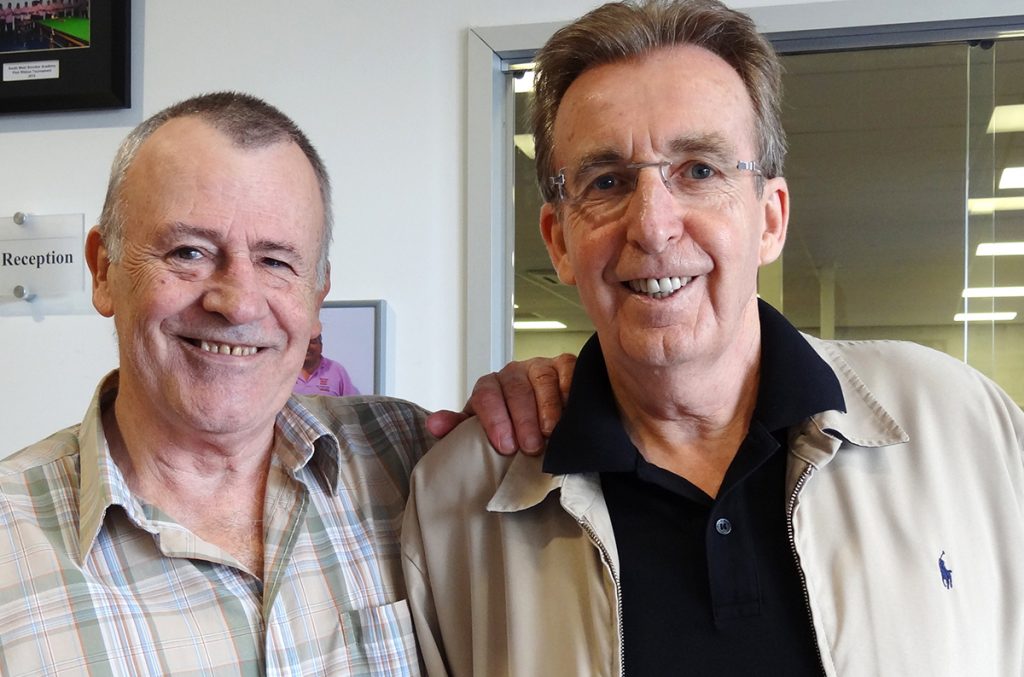 Mountjoy with his friend Terry Griffiths

Mountjoy was in his mid 30s when he turned professional. He had worked, like many generations of men in South Wales, as a coal miner and played snooker in the evenings.

The professional game in the 1970s was very different to the thriving circuit of today. It was run like a gentleman’s club and you were only invited in if your face fitted.

Mountjoy forced his way in. He had won the Welsh amateur title in 1968 and 1976 and became world amateur champion in Johannesburg later that year. Such was the prestige of this big international event that when there was a withdrawal from the 1977 Masters field, he was invited in as a replacement. Far from making up the numbers, he beat four world champions – John Pulman, Fred Davis, Alex Higgins and Ray Reardon – to win the title.

The circuit was still in an embryonic state. This was just before the BBC took the leap to start showing live snooker on a regular basis, but Mountjoy’s reputation quickly grew. On his World Championship debut, he beat Higgins in reaching the quarter-finals at the new venue for the game’s premier event, the Crucible theatre in Sheffield.

At the end of 1977, he reached the final of the new UK Championship, losing to Patsy Fagan. He was runner-up to John Spencer in the first Irish Masters in 1978. The following season he won the UK title at the Guild Hall in Preston, the Irish Masters at Goffs showring in County Kildare and was successful in the programme which had initially brought snooker to public attention, BBC Pot Black.

In 1980, Mountjoy captured the first of his five Welsh Professional titles and won the Champion of Champions, the forerunner to the now highly prestigious ITV event. It was clear he posed a threat in the sport’s biggest tournament and in 1981 reached the World Championship final, beating Willie Thorne, Eddie Charlton, Dennis Taylor and Reardon at the Crucible.

Standing in his way was a relative newcomer, who had already served notice of his potential by winning the UK Championship earlier that season. Steve Davis was 23, some 15 years the junior man, and as if sensing his own destiny, raced 6-0 ahead.

As Davis set off to conquer the 1980s, Mountjoy became a familiar cast member in the enduring soap opera which underpinned the UK snooker boom, in which this once fringe pastime enjoyed an unprecedented love affair with television and, by extension, the public.

The players became household names and frontpage property. Some grew rich beyond their wildest dreams. Some fell for the trappings of fame and self-destructed. Mountjoy just kept playing.

He represented a holy trinity of Welsh snooker with Reardon and Terry Griffiths. The trio won the first two stagings of the World Cup and were highly visible sporting icons for their country to rival even heroes of the rugby field.

By now Mountjoy was in his 40s and, towards the end of the decade, decline was setting in. At the 1988 World Championship he lost 13-1 to Neal Foulds and dropped out of the top 16.

Once again, his toughness came to the fore. He opted to rage against the dying of the snooker light by going to see Frank Callan, a Blackpool fishmonger with a well deserved reputation for being the best coach in the country. Callan took Mountjoy’s game apart and rebuilt it. Mountjoy was a willing student and when he beat Stephen Hendry at the Grand Prix early the following season, there were signs of a resurgence.

Even so, what followed remains one of the most extraordinary stories in a sport blessed with sundry remarkable moments.

At the UK Championship, ten years on from his inaugural triumph, Mountjoy played the snooker of his life, beating Foulds, Joe Johnson and John Virgo. By now, he was so relaxed with his new technique that he fell asleep during one interval in his semi-final with Griffiths. He won 9-4 and faced Hendry in the final.

The Scot was just 19 but already had two ranking titles to his name. He represented snooker’s future, but Mountjoy was far from yesterday’s man.

He led 8-6 after the first day before a golden spell which saw him pull 15-7 in front, including three successive centuries, a feat only previously achieved by Davis a couple of months earlier.

Hendry fought back but Mountjoy won 16-12. In the emotional aftermath as dozens of camera flashlights illuminated this poignant scene, he said simply of Callan, “Without him, I’m nothing.”

In isolation, this would have been a memorable achievement but Mountjoy then won the next ranking event, the Mercantile Classic. In the space of a few weeks he had pocketed nearly £150,000. He was 46 but bound again for the top 16, rising to a career best of fifth. He reached another ranking final at the 1991 Dubai Classic.

A couple of years later Mountjoy had a lung removed after developing a cancerous tumour. He quit the circuit in 1997 and became a coach in the United Arab Emirates.

He had however provided snooker fans of a certain age with an indelible memory at that 1988 UK Championship, of a humble man of the people triumphing against the odds, the sort of story that sometimes only sport can credibly produce.

He would pass on his considerable knowledge through his coaching role, encouraging players of all abilities to become the best they could be.

And long after his professional career had ended, when the spotlight shone on the sport’s newer stars, he still enjoyed social games of snooker at Mark Williams’s club in Tredegar.

There were no cameras now, no bright lights. There was no audience. There was just a pure snooker man, Doug Mountjoy, doing what he had always loved.