When Victor Sarkis won the Pan-American Snooker Championship in Toronto 2021, it was an emotional moment for him and his family. 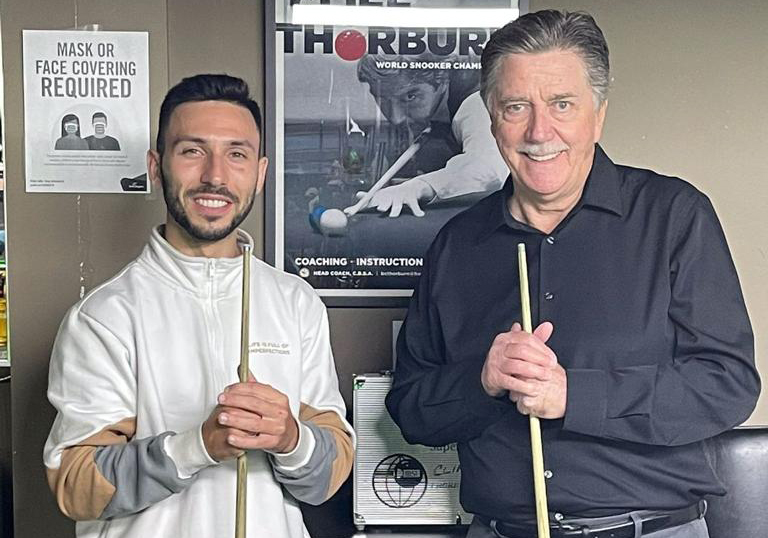 Sarkis with the greatest ever player from the Americas, Cliff Thorburn

His father had been in hospital for several weeks with a serious illness in their home town of Florianópolis in Santa Catarina, Brazil. “I slept for many nights in the hospital,” recalls 31-year-old Sarkis. “It was a very worrying time for my family. We didn’t know whether he would come out. Then the time came when I had to decide whether to go to Canada.

“I felt I had to go, because the opportunity was there. I concentrated completely on snooker, and tried not to think about any of the problems back at home. I had faith, and I felt the power of the Brazilian people, my family and friends. When I potted the last ball, I just stopped and looked at my friends. When I got back home to Brazil with the trophy, my mother cried and my father cried.”

Victory at the biggest amateur snooker event staged in the Americas came with the chance of a two-year-card to the World Snooker Tour, for the 2022/23 and 2023/24 seasons. Sarkis hopes to come to the UK soon to take up with chance to turn professional, though complications remain.

“I would love to come to the UK and it has always been my dream to play on the pro tour,” he said. “I am trying to get a visa but it is not easy. If I can find a sponsor either in Brazil or the UK, that would really help. Thankfully, my father is not in hospital any more but he is 76 and he has Parkinson’s disease so that is another factor. But I have a brother and a sister who can help look after him.” 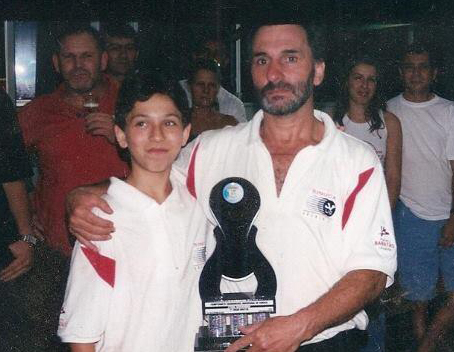 As a junior with César Siegel, nicknamed Koca. The same duo are shown, years later, in the picture at the top of this page.

Sarkis played pool at the age of six, then graduated to snooker three years later, albeit on the ten-foot long table favoured in Brazil. “I had a coach called César Siegel,” he remembers. “He taught me so much about the game, and also how to be a good human. I’m very proud to have this man in my life. After that I practised for many hours, days and months.”

Sarkis didn’t play on a full size table until he was into his 20s. But he has won the Santa Catarina Championship no fewer than seven times, then enjoyed the best performance of his career in Canada last year, winning six matches to reach the final before beating Renat Denkha of the USA 5-3.

“It was a big surprise for me to win, but I played very well, I made the highest break of the tournament with a 117 and many others over 80,” he said.

He is a close friend of Igor Figueiredo, Brazil’s best ever player who has reached the last 16 of three ranking events. “He was my idol when I started,” said Sarkis. “The first time I played him in the Brazilian Championship, he beat me 5-0. The next time we met it was the semi-finals and it was a lot closer, he won 4-3. And we met again in the final but he beat me again. Igor has so much experience and he has helped me a lot.”

Sarkis has a table-fitting business, supplying and maintaining snooker tables and cloth in Santa Catarina. He said: “If I come to the UK I will have the chance to share my own knowledge and learn more about making tables.”

He names Ronnie O’Sullivan as his favourite player, and believes that he would be competitive if he gets the chance to compete on the tour. “I have good technique, in fact I coach other players in Brazil,” he added. “I have good concentration and cue ball control. I think I can win matches. But if I lose, that’s ok because it’s important experience. I am a hard worker and if I come to the UK I will be practising for many hours every day to get better.”