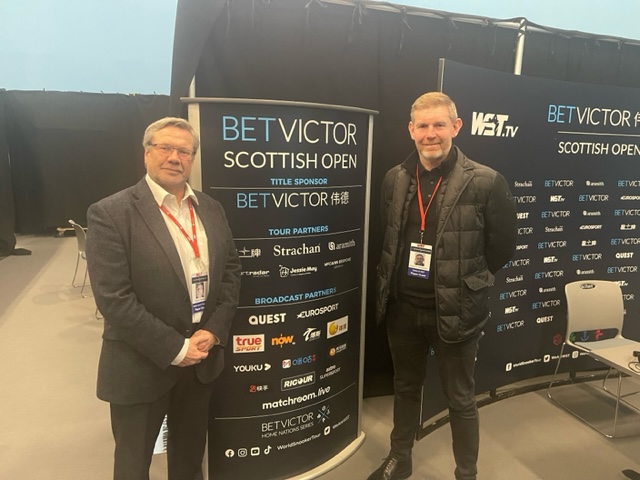 Former Ryder Cup golfer Stephen Gallacher enjoyed a trip to the BetVictor Scottish Open last week and the Scot was thrilled to witness live snooker in person for the first time.

Gallacher was treated to a superb first match at the Meadowbank Sport Centre in Edinburgh, where he saw Thepchaiya Un-Nooh’s thrilling 5-4 quarter-final win over Judd Trump, which came down to a re-spotted black in the decider.

The 48-year-old was there as a guest of coach Steve Feeney, who he has been working on his alignment with using the SightRight method. The sporting crossover is not one which Gallacher thinks is unusual, due to the fact he sees a lot of parallels between snooker and golf.

Stephen, how did you first get into watching snooker?

“I love snooker. Everybody in my age group grew up watching the massive events, the Crucible, the Masters and anything that was on terrestrial TV. I just met one of my idols, Jimmy White in the Eurosport studio. I used to love watching him and Steve Davis. I think the sport was amplified when Stephen Hendry came along. It was great to see a Scot be so dominant in the sport. Ever since then I’ve been an avid follower of the game, especially the Scottish guys. It has been great to come along, as I’d never seen it live before. With myself being involved in an individual sport it has been interesting to see the differences and the similarities.”

Considering the country has produced all-time greats like Stephen Hendry and John Higgins, how important is snooker in Scotland’s sporting makeup?

“I think it is hugely important. It is disappointing not to be able to see any of the Scottish players in action. I was hoping to see John Higgins or Anthony McGill, but unfortunately they both got put out the day before. I know John pretty well, he supports the same football team as me, I used to sit pretty close to him at Celtic Park. I’ve played golf a couple of times with Stephen Hendry. You have a mutual appreciation of other sports and Scotland has produced some magnificent snooker players.”

What parallels would you draw between golf and snooker?

“You need a selfish and individual mentality in both sports, as you are out there competing as an individual. There is touch, feel and skill in golf and snooker. You can have all of your technique in place and have the ability, but sometimes it comes down to holding your nerve. In both sports you have shots which you may practice routinely, but if there is that bit of extra pressure you need to handle it and execute. When you are in a competitive situation everything changes. The hard thing for me is that I’ve spent 40 years looking at the ball I’m going to hit. You come to a snooker table and you have to hit the other ball.”

You’ve worked alongside coach Steve Feeney, who works in both snooker and golf. How important is alignment in both sports?

“There are so many aspects to golf and alignment is a huge thing. If you aren’t lined up right it can affect your technique. It is advisable to have a robust routine and get set in the right place to sight the shot. Once you are in position, then you can work on the other stuff. That is the bedrock to everything. You can work on the other stuff but if your sighting is off, then you are putting fires out and starting others. It is a vicious circle. I’ve seen it in golf. I know how important it is from the onset. I’ve done a bit of work with Steven in the past and he is hopefully going to do a bit with my foundation to set youngsters off properly on the right footing.”

What sort of work have you been doing with your foundation?

“I’ve had a junior foundation for 12 years. I’ve just opened a trackman and putting facility in Linlithgow, where school children can come as part of the curriculum. After that we put on events for elite golfers as well. I’ve got the best coaches in and I want to have people from all over Scotland coming. Steven is going to train up the coaches to test for eye dominance and start from there. It is a great platform to then look at your technique. I’m trying to give people the best chance to improve.”

What are your goals and targets for the golf season?

“I’m going to get some invites next year. I’m just practising hard so when I get the chance next year I can take it. I’m 41st in the all time money list and top 40 gets you an exemption. My goal is to get back into that and one or two good events will do it. I am 48 now so hopefully a couple years on European Tour and then I’d like to have a go on the American Seniors Tour. My good mate Padraig Harrington is clearing up out there. It would be good to go over and test myself against him again.”