When competitive snooker gets going again, Ashley Hugill will be ready to make a fast start.

The 25-year-old has regained his pro tour card after an outstanding season among the amateur ranks, and believes he is now well equipped for the challenges of snooker’s top level. 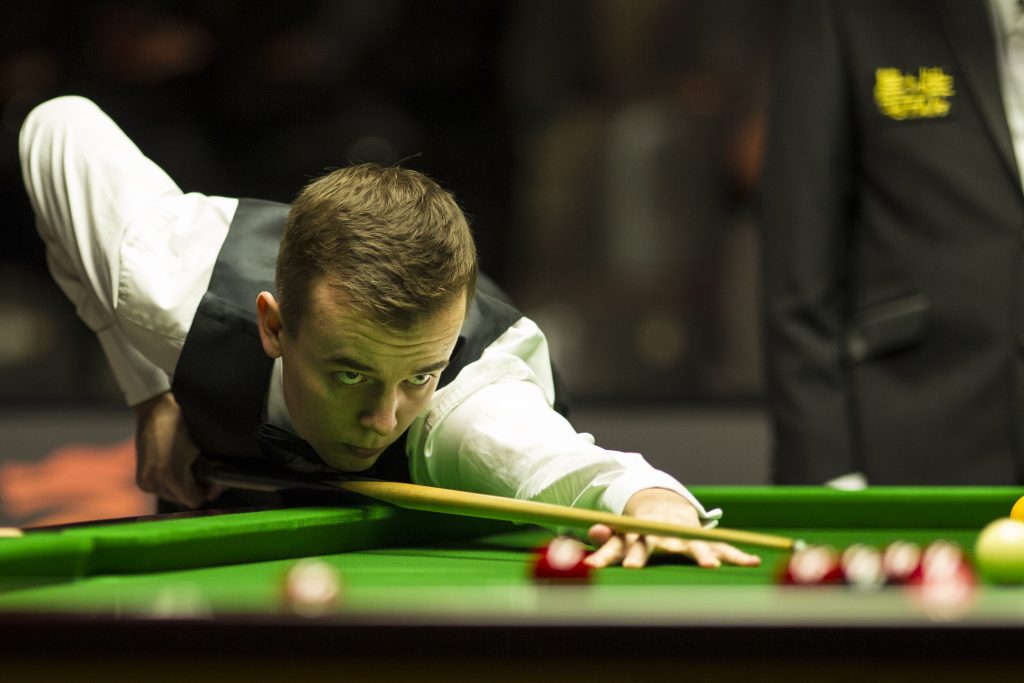 And unlike many players, Hugill will have plenty of practice under his belt when the Betfred World Championship qualifiers come around, as he is staying at his parents house near York during the current lockdown.

“We have a snooker table in the house which was recovered just a few months ago,” said Hugill. “So it’s nice that I can play without having to leave the house and I realise other players might not be so lucky.

“It’s a shame the qualifiers are not being played in April because I am playing well and felt I could have done some damage (Hugill is one of the amateurs invited to play in the world qualifiers). But there are much more serious things going on in the world and we all have to stay at home for the time being.

“A lot of players are in limbo, waiting for the chance to try to keep their tour card or the chance to play in Q School and get promoted. The good thing for me is that I’ve got my card so I’m just waiting for next season, whenever that happens. I have achieved what I set out to do at the start of the season.”

Just nine months ago, Hugill was at the lowest point of his career so far. He was relegated from the circuit after two years as a pro, and failed to get through Q School.

“I was at a very low ebb,” recalls the Yorkshireman. “I had lost a lot of matches and my belief in myself as a player was waning. I just wasn’t sure that I was good enough to be a pro. The turning point came at the third Challenge Tour event in Leeds, when I made a 147. That restored my confidence and put the doubts to bed.”

He went on to win two of the next four Challenge Tour events, reaching the final of another and the semis of the fourth. By the end of the season he had comfortably topped the ranking list. But the real icing on the cake came with victory at the World Snooker Federation Open in Malta  in January. 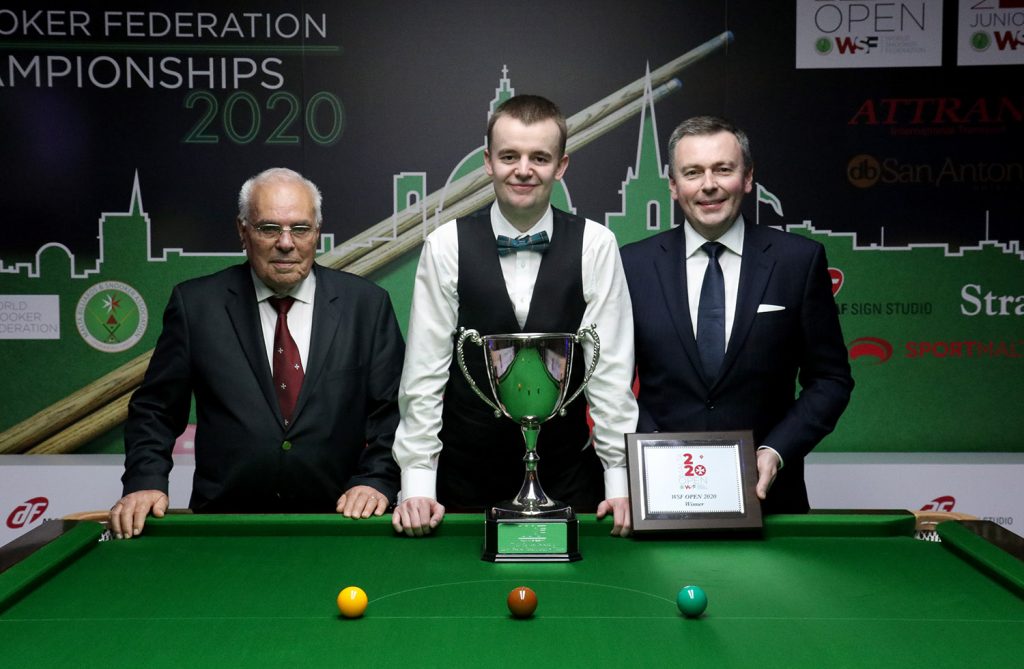 Hugill with the WSF Open trophy

After coming through the group stage, Hugill won five matches to reach the final, where he saw off Ukraine’s 14-year-old prodigy Iulian Boiko 5-3 to win the biggest title in amateur snooker.

“Before the event a few people were advising me not to go because it clashed with Challenge Tour event eight and I was in a good position to finish top of the rankings,” he said. “But I had never played in an international amateur event before and I believed I was good enough to win it so I wanted to give it a go.

“When I told my parents and grandad it was in Malta they decided to come as well, partly as a holiday and partly to watch me play. I can’t describe the feeling of winning the event with them in the crowd supporting me and seeing the look on their faces. They have been supporting me and rooting for every result since I was 12. So to share the celebration with them was one of the best moments of my life.

“The encouraging thing was that I felt very calm in the semis and final. I was nervous earlier in the event, especially in the quarter-final against Allan Taylor. But on the last day I made sure I was fully focused and I felt great.”

Hugill credits sports psychologist Matt Andrews for his improvement in form and increased confidence. “I started working with Matt when I was down on myself last year,” he explains. “I couldn’t have achieved what I have done this season without him. He has improved the way I think and the processes I go through under pressure.

“During the two years I was on the tour I was improving as a player in terms of my technical ability, I could see that on the practice table. But it wasn’t coming out in matches. So the work I have done with him on the mental side has allowed me to play the way I know I can in tournaments.

“It’s a steep learning curve when you first play on the tour, I can see that now looking back with hindsight. That experience will really help me next season because it won’t all be new to me. I feel ready for it now.” 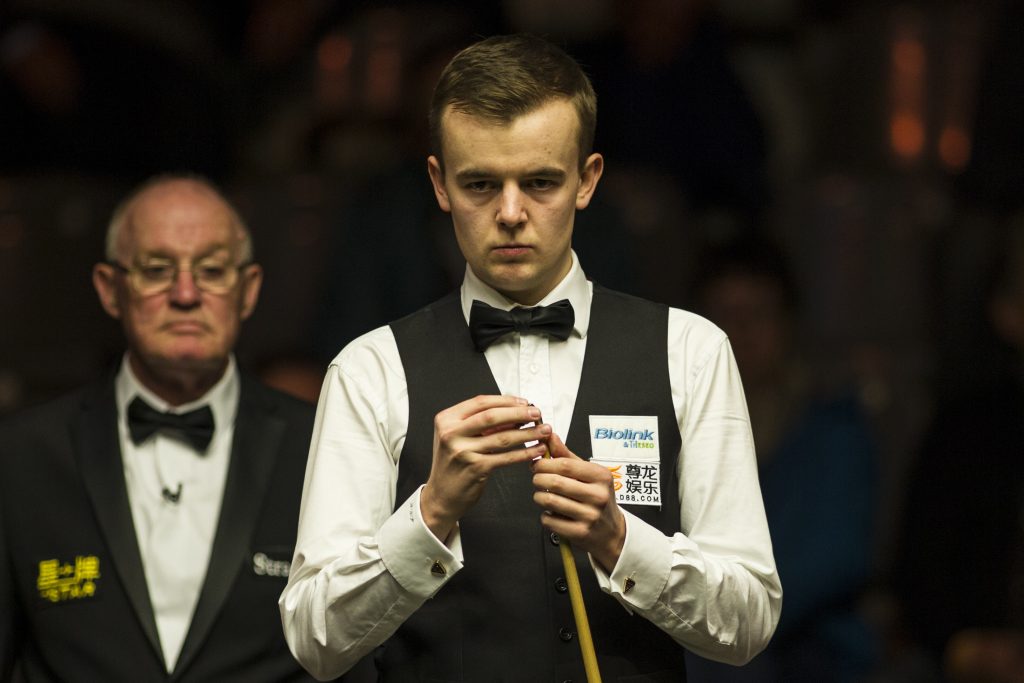 Hugill also owes a debt of thanks to Shoot Out champion Michael Holt. “I have practised with Michael for a few years in Nottingham and learned a lot from him,” said Hugill. “It was good of him to help me out when I first turned pro.”

At the recent BetVictor Gibraltar Open, Hugill actually beat Holt on his way to the last 16. He won seven matches before his run was ended by Liang Wenbo. He then faced a hazardous journey back to UK as the coronavirus crisis took hold in Spain.

“I managed to get a seat on a flight from Seville,” said Hugill. “But it meant a four hour coach journey and then four hours sitting in the airport. I’ve never seen an airport that busy. There was nowhere to sit down, nowhere selling food or drink. There were two vending machines which had to be refilled five times. I spent about £30 on water, crisps and doughnuts! It was such a relief to get home in the end.”

Now safely back at base, Hugill can look forward to next season and draw inspiration from the likes of Neil Robertson, Shaun Murphy and Kyren Wilson who have been through the disappointment of tour relegation and the challenge of rising again.

“It was the thought of players like that, who have gone on to be champions, that kept me going last year,” said Hugill. “The fact that they dropped off the tour and came back stronger inspired me to try and do the same. I have kept working hard and stuck at it. I have an open mindset about the future. I will just keep trying to play the right shots, keep the right attitude and see where it takes me.”