Inside The Crucible - Donna Beresford 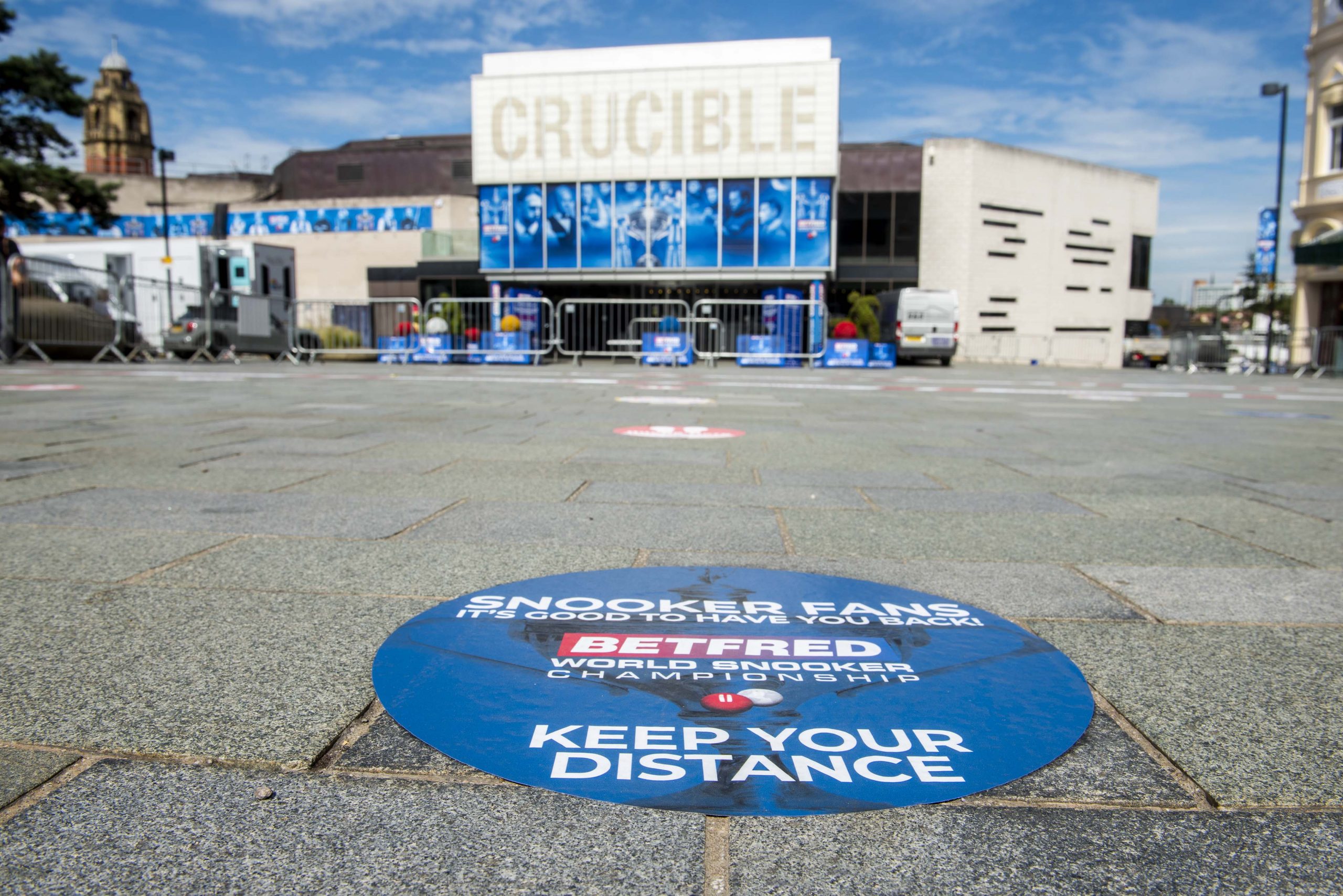 The intricacies of staging a global sporting event during a pandemic are extensive. Behind the scenes at the Betfred World Championship, a dedicated team have worked all the hours to ensure that the show goes on.

The 2020 edition of snooker’s showpiece tournament will live long in the memory. The hallowed Crucible Theatre opened its doors to a limited audience on Friday July 31st. However, a government announcement ending the trial of fans at sporting events moved the tournament behind closed doors.

That resulted in unique circumstances for everyone involved at the Crucible, from the officials and players to broadcasters and viewers back at home. In a series of backstage features, we’re going behind the curtain to find out what it has been like to be at the Crucible for this historic World Championship.

First up is an interview with WST Event Director Donna Beresford, who has been one of the key figures in ensuring that this year’s tournament could go ahead…

Just to stage this year’s Betfred World Championship, required hours upon hours of planning and preparation. Beresford was right at the heart of this process and was responsible for making these plans a reality.

On the eve of the tournament, all measures were geared towards being one of the first sporting events to welcome a crowd since the coronavirus pandemic caused nationwide lockdowns around the world.

The socially distanced and limited capacity crowd welcomed defending champion Judd Trump into the arena on the opening morning, as he began his Crucible campaign. The Department for Digital, Culture, Media and Sport (DCMS) conducted an inspection on that first day and were impressed by the COVID-secure safety measures which had been implemented.

However, a spike in coronavirus transmission data caused the UK Government to halt all trials for the reintroduction of fans at sporting events that very afternoon. Beresford believes that despite the disappointment of losing the spectators, implementing these measures on day one will stand snooker in good stead when audiences can return.

“Our aim, from a WST perspective was for people to be and feel as safe as they possibly could. It was really exciting to be the first sport to do this,” said Beresford.

“The first part of the process was making sure everyone could get to their seats. There were 226 individually printed and socially distanced dots laid out in Tudor Square at the front of the Crucible, to facilitate the queues before sessions. Lots of professional drawings were done to ensure everything fitted. Exact templates were used to lay out the dots at the appropriate distance.

“At the same time as implementing these safety measures, we also wanted there to be a bit of a festival feel. We had a musician on site and ice cream vans integrated into the queuing process. Inside the Crucible, the seating plan was meticulously devised to ensure socially distanced seating arrangements. The seats which were out of use have been clearly marked. We had great feedback from the DCMS and fans, it was just unfortunate with the timings that we only had one day with spectators.”

With the event proceeding behind closed doors, fans from around the world have been treated to some spectacular snooker. John Higgins fired in the first 147 break to be made at the Crucible in eight years and in total there have been 52 centuries at the time of writing. The intimate nature of the venue has meant that for the event to be staged at all, extensive safety precautions have been required. 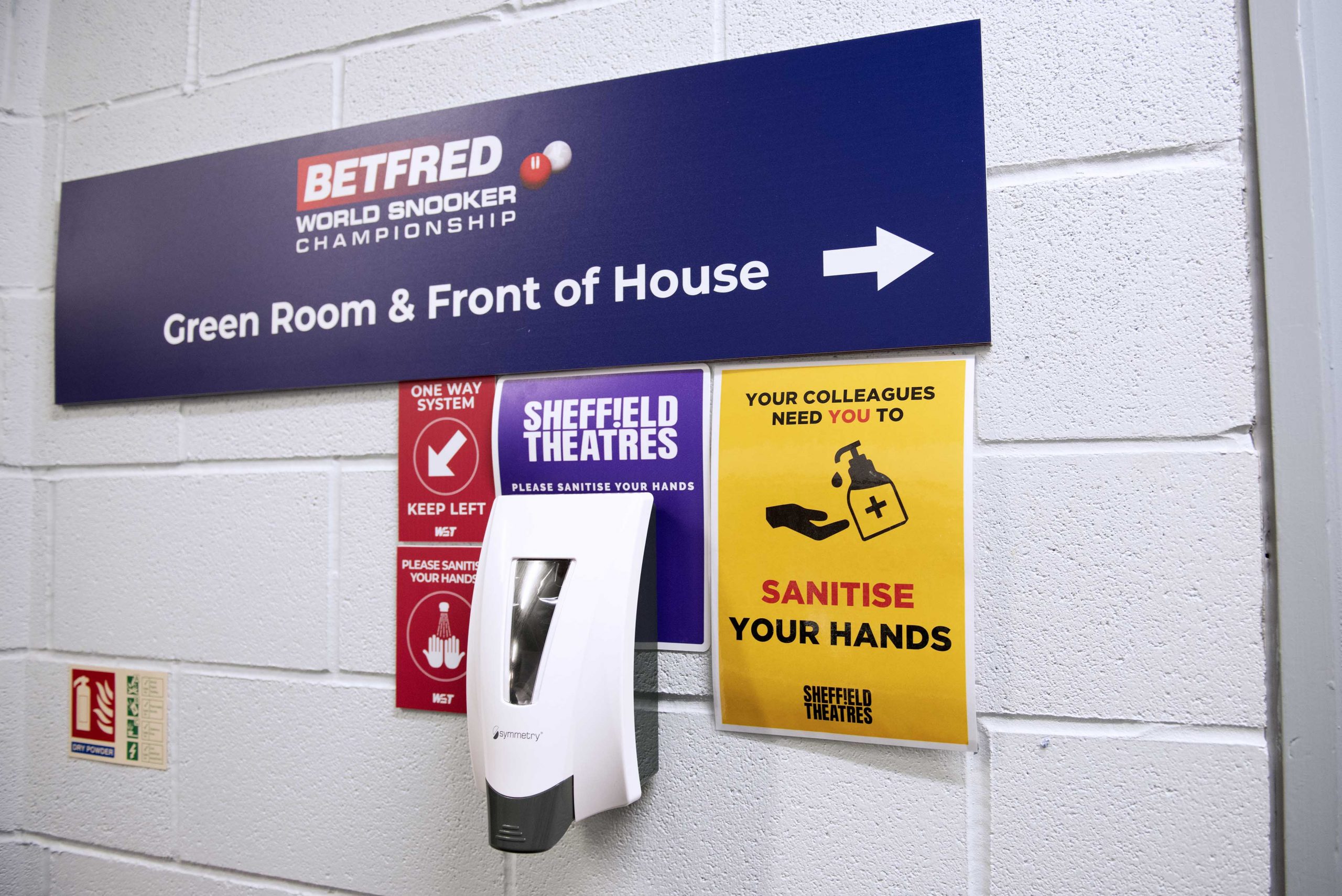 Beresford explained: “We had two levels of thought that went into the event, being able to run it with an audience and being able to run it without one. Having already successfully staged three events behind closed doors, including Crucible qualifying, we are pretty well versed on that front. As with the other events, everything backstage has been mapped out with one-way systems in place. There are lots of beautiful, narrow corridors at the Crucible and controlling the flow of people through them is really important. We have hand sanitisor available all around the building.

“We’ve also had to alter the playing area. The dividing screen between the tables used to be short enough for people to move across from one side to the other. Now it covers the entire length of the arena floor. This means that cameramen, referees and players can operate safely within social distancing guidelines. It basically acts as a big safety screen.

“The number of people on site have been kept as low as possible, whether this be broadcasters, officials or the rigging crew. There are distinctive zones, which only certain people are allowed in. These include the backstage area, front of house and the TV compound. It is all very regimented. All of the staff, players and their guests are subject to our Covid-19 testing regime and if they fail at any point they will be asked to leave.

“The cleaning and sanitising process has been equally regimented. We have roaming cleaners, who sanitise any contact points every 30 minutes. These include door handles, railings anything that people are constantly touching. We’re also using an Ozone machine periodically in all rooms around the venue. This is a special piece of equipment, which purifies the oxygen in a room. The process has to be carried out overnight, as nobody can be in the room while it is happening. The oxygen inside a room is sucked into the machine, it then cleans it using a UV filter and pushes the oxygen back into the room. This allows us to sanitise an area without using chemicals or sprays.”

The sparkling snooker has continued to dazzle inside this highly sanitised environment. Although fans haven’t been present, Beresford and the WST team have done all they can to inject additional atmosphere into this famous venue.

“Originally, when we were planning for no audience, we had designs for a big covering to go over the seating. We also had plans for fans to be able to appear in the venue on video screens. When we got the go-ahead for the audience these things got put on the back burner. We’ve still done all we can on short notice and added additional lighting as well as pumping crowd noise into the arena. I hope that when viewers tune in, they are still glued to the edge of their seats and are as gripped by the thrilling action the players are providing as we all are here in Sheffield.”