There was a bizarre hot-mic moment on today's broadcast of the John Higgins v Ronnie O'Sullivan semifinal at the World Snooker Championships in Sheffield.

As the broadcast conversation dipped, snooker legend and Eurosport co-commentator Jimmy White could clearly be heard saying 'I can't work in these fucking conditions'.

If you listen closely, you can hear what sounds like a chair or a desk squeaking moments before White utters his statement.  The tense semifinal was tied at five-frames a piece at the time.

Of course, viewers at home noticed it.

A few minutes later, O'Sullivan asked the referee to request that spectators in the front rows of the Crucible refrain from phone use.

As per the request of Ronnie O'Sullivan, the referee reminds the Crucible crowd of the rules while watching the snooker 🤫📲

Perhaps they were being sent a video of White swearing.

After play ended last night, O'Sullivan did his best to seemed laid back about the prospect of losing to his old foe.

“I’m just here to play and have fun like when I was a 10-year-old. I can get over it. There’s so much good stuff going on, it’s a little dent, whereas before it would be a write-off and the car would be at the menders for six months. Now it’s a little polished, we move on. Life’s great, life’s fantastic.”

But White said told Eurosport he wasn't buying it.

“He would love to equal Hendry’s record and beat it in the next few years, so I don’t buy into that. He said after the second match he has a good team around him and is seeing Steve Peters, so he is trying to win the competition.” 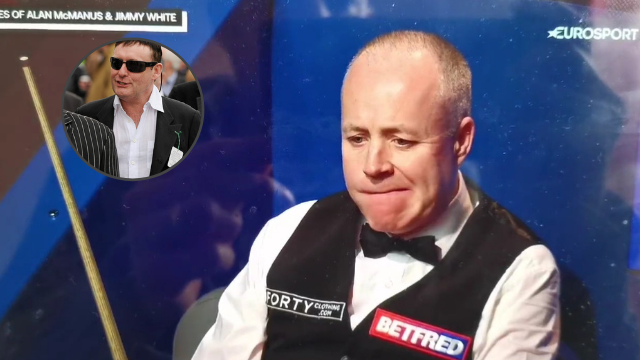