Yan Bingtao came out in top after an epic battle with Mark Selby last night, winning their marathon clash by a 13-10 scoreline at The Crucible.

Selby was not in peak form heading into the contest, although the defending champion was still expected to overcome the challenge of the 22-year old. However, the Chinese star produced some stunning snooker to eliminate the top seed.

It was a gruelling clash at times, with the match even featuring the longest frame in World Championship history.

This proved to be a key moment as the underdog went on to claim the victory soon after.

It was certainly a tense affair at times.

At one stage, Yan Bingtao broke one of snooker's unwritten rules when he asked referee Rob Spencer to clean the cue ball for him before a vital shot. Selby was bemused with the request, with the official turning it down.

While he would pull off the shot regardless, Eurosport commentator David Hendon said the question from Bingtao was 'out of order'. Pundits Jimmy White and Mark McManus also criticising the Chinese star in the studio.

🗣️ @jimmywhite147 : "That's sort of an unwritten rule amongst professional snooker players" ❌
🗣️ @AlanMac1990 : "In future you don't do that"

Was Yan Bingtao trying to gain an advantage by asking referee Rob Spencer to clean the ball for him? 🤔@WeAreWST | 🎙️ @iamradzi pic.twitter.com/XOErm4fbqE

White: Bingtao has looked at that shot for over a minute, he's not sure if he can even hit it or not. He has then asked Rob Spencer if he can clean the cue ball.

That's sort of an unwritten rule amongst professional snooker players. Fair play Rob Spencer who has stood his ground and said no. He could put it back slightly wrong and Bingtao then could have an easy shot at the brown.

It is something you don't do. It might have been Bingtao being under pressure and thinking of anything he can do to win, but you don't do that in snooker...

McManus: We can't get inside Yan's mind to know how underhanded he maybe is thinking. What I do know is I don't like seeing it, Mark Selby did not like it and most of the guts on tour would be the same."

It's not something we would encourage, we would actually encourage the opposite. The referee won't be hoodwinked there, because Rob Spencer is a brilliant referee.

Yan Bingtao is young and not from these shores. Maybe someone could pull him aside and say 'you tried to pull a fast one there, but in future you don't do that'.

Yan Bingtao will now face Mark Williams in the quarter-finals in what is sure to be a massively intriguing match.

SEE ALSO: Mark Williams Blasts 'Idiots' Who Criticised Him Ahead Of Meeting With Protégé 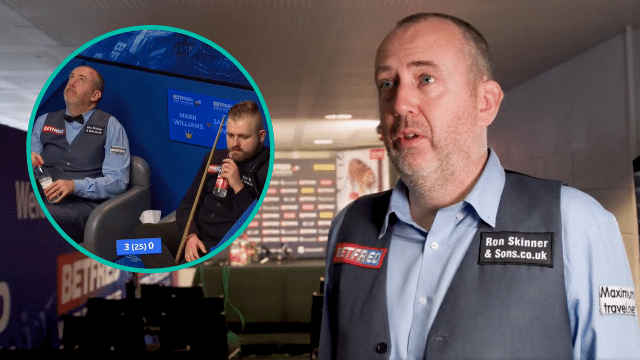