Snooker fans can't help be excited by the semi-final lineup of this year's World Championship.

While there is always something fresh about experiencing an exciting new player burst onto that stage, there is just something great about seeing the most storied names in the sport competing at the business end of the tournament.

Ronnie O'Sullivan, John Higgins, Mark Williams, and Judd Trump are a brilliant quartet, with all four men having previously been crowned world champions. In fact, Trump is the only one of the group not to have won the crown at least three times.

Of course, O'Sullivan, Higgins, and Williams are the three members of the vaunted 'class of 92', with the trio having gone on to dominate the sport after turning professional in 1992. It is remarkable to see them still competing at the highest level three decades on, something that led to the other semi-finalist throwing a cheeky dig on social media.

Taking to Twitter, Judd Trump couldn't help but poke fun at the age profile of the other three men left standing in this year's event.

Super excited for the semi finals tho still battling it out with 3 legends of the game!

Trump is set to face Williams in the semis, with O'Sullivan battling it out with Higgins on the other side of the draw.

The 2019 world champion has plenty of momentum going into his match against the Welshman, winning eight frames on the trot to see off the challenge of Stuart Bingham in the previous round.

How the hell did Judd Trump make the cue ball do that off the pink? 😬pic.twitter.com/32MNvcKil7

Speaking to Eurosport after that match, Trump admitted he is flying under the radar in this tournament compared to the three other semi-finalists.

It was a semi-final I wanted to be a part of. I am not ready to go home just yet.

I feel I am improving very slowly, and maybe by next year’s World Championship, I will be playing better! Now with the one-table setup, I can’t wait to get going.

I am so happy. I’m not normally this happy to still be in an event, but I’ve not played that well so it’s like a free shot for me.

I’m going under the radar, no-one expects me to win so I am playing with so much freedom. I have had no pressure, just battling my hardest and I’ve got a free shot at Mark Williams.

We are sure to see some very intriguing snooker played over the next couple of days. 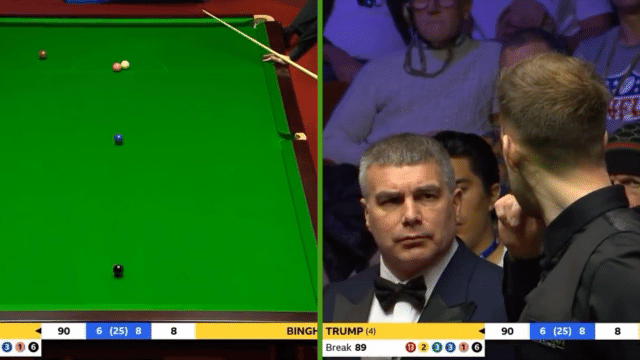