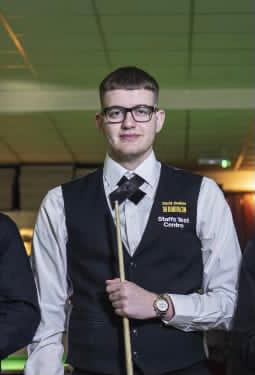 Former English Under-18 champion Jenson Kendrick was the only tour debutant to emerge from this year’s Q School in Sheffield, but he is keen to make an immediate impact.

The 21-year-old defeated Hayden Pinhey 4-1 in the final round of the last event to get his hands on a golden ticket to the World Snooker Tour for at least the next two years.

Kendrick left school after his GCSEs and went all in on devoting his life to becoming a snooker player. Although there is much work still to be done to make that pay off, the first part of his mission has been completed by earning professional status.

We caught up with Kendrick to hear a fascinating tale of how he got into snooker at a late age, find out who his hero is and learn more about his playing style ahead of his rookie season…

Jenson, first of all what was it like when you got over the line at Q School and achieved your dream of becoming a professional snooker player?

“The pressure builds up each match you win, because you know if you lose you are going to have to wait another year for that opportunity to come again. Every match out there is tough. Q School is the hardest tournament for amateurs and especially when you get in touching distance. The nerves kick in, the thoughts of turning professional kick in and it is tough for everyone.

“Every emotion you can think of was going through my body. I had a couple of moments when I went 3-1 up and it hit me that I could be about to turn professional. The tears started flowing and I told myself that I had to stay focussed. When I got over the line, words can’t explain the feeling. I had proved to myself and everyone else that I could do it. The last five or six years all boiled down to winning those last matches in the final event and getting through. “

Since leaving school and devoting yourself to snooker, how much have your parents, Jason and Angela, helped you?

“The support my parents have given me is amazing. I can’t really repay them, because nothing will equate to what they have done for me. Waking up early on Saturday mornings to take me to tournaments, helping financially. Everything they could have done to help me, they have done. They have given me so much belief that I could do pretty well at this sport.

“My dad is self employed in the motor trade and my mum works at a school as a receptionist. You don’t realise it at a younger age, but looking back you see my dad working seven, eight or nine hour days, before taking me up to the club, picking balls out for me and taking me home. Then the same thing at the weekends heading to tournaments and he was back to work on Monday. Now as a 21-year-old I can see how much he has sacrificed so that I can have my best life.”

How did you originally get into the sport?

“I used to play football in the Stoke City Academy. Unfortunately, at the age of 14, I broke my leg in training. I was in this cast so I was out of action for a long time. My dad has played snooker all of his life and asked me one Sunday if I wanted to go down to the club to play with him. At that point I didn’t really know what snooker was. There happened to be an under 16 competition on and my dad asked if I wanted to play, so I went for it. I didn’t know the rules or what I was doing. I had a two-hour lesson before we started and somehow won the tournament. I looked at my dad at that point and said I don’t want to play football anymore and that I love this game. I started doing it as a hobby, but that turned into giving it everything I have to try and get to the top of the game. I really stood out at football and when I went to Stoke City Academy they took me on straight away. Being a professional footballer is a life every child thinks about and wants to pursue, but something clicked for me with snooker and that is what I went for.

“It was very late to start playing. When I began travelling the country a bit more I got chatting to players and they asked how long I’d been playing. The answer was seven or eight months, they had been playing for seven or eight years. That gave me a lot of confidence because I was able to compete with them.”

Who was your snooker hero growing up and what can we expect from your own playing style?

“The main person I used to watch was Judd Trump. It was just the flair he played with, he had the shoes and a charisma about him. He was brilliant to watch. Watching some of the shots he could play, like screwing back the length of the table, was amazing. It made me want to be able to do that as well. He has been my idol since I first picked a cue up.

“I am very attacking. I don’t hold back on my shots. I like to play an aggressive game, get the balls open and score as heavily as I can. I just bring a bit of character into it. I’m not a boring kind of person. I like to show off at the end of a frame and have a bit of fun. All parts of my game are solid. If I need to slow my game down I can, if I need  to pick the pace up and start scoring I can do that. I think I’m fearless and confident, so I will give it everything  in every match.”

World number 39 Liam Highfield is a practice partner of yours. How much has he helped you develop?

“Liam has helped me so much. Before I met him, I didn’t have the mentality to go with the game. He would sit me down once a week and we would go through things. He would tell me what I needed to improve on and was very firm with it. He showed me all of the routines and even did little things like giving me breathing techniques to use when my opponent is at the table. If it wasn’t for him I wouldn’t be turning professional this year.

“I’ve also got to thank everyone at my club, the Victoria Lounge Bar. Dave Deakes, who has sadly passed away, Eileen and Mandy have all been amazing for me. They have given me table time and free dinners, they have helped me as much as they possibly could.”