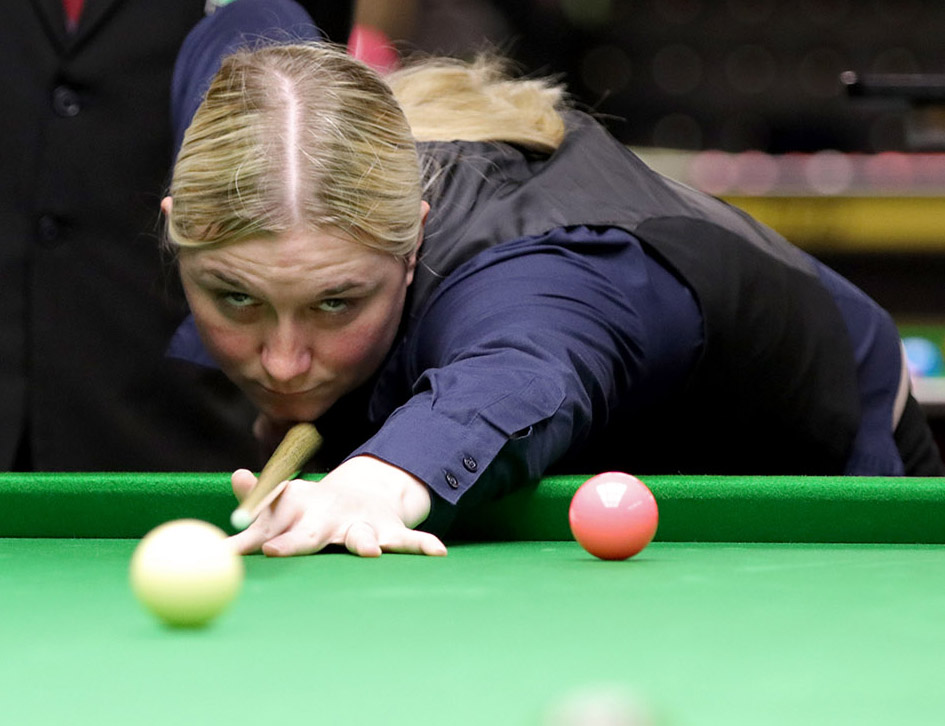 Women’s world number four Rebecca Kenna is relishing the chance to test herself against the sport’s top stars at Betfred World Championship qualifying next month.

The Yorkshire cueist will join women’s World Champion Reanne Evans in the draw for Crucible qualifying.

Both players have already appeared at the Theatre of Dreams at the Women’s Tour Championship in 2019. On that occasion, Kenna lost out to Ng On Yee in the semis, with Evans picking up the title.

Rebecca, congratulations on the place at World Championship qualifying. First of all, how did you originally get into snooker?

“I started quite late as I used to play football as my main sport. I was a central midfielder playing for my local team Keighley, which had merged with the team from Riddlesden. I got injured in 2015 and wasn’t able to play anymore. I needed an operation on my shoulder after quite a bad dislocation. I couldn’t do anything strenuous for a while. I really missed competing during that time. I was still able to play snooker over that period, so I did that with my dad. He passed away in 2015 as well. It was a very difficult time.

“I used the snooker table to get my stress away. I started playing more and more. I competed in the snooker league at the time, but was just an average club player. Snooker was the main thing I did with my dad, so after I lost him I was glued to the table. I got to the stage where I was spurred on to find tournaments and I discovered the women’s tour in 2016. Since then I’ve never looked back.”

You now own a cue sports shop in Keighley called Q Sports Yorkshire. How did that come about?

“I realised I was actually quite good and doing quite well on the women’s tour.  I wanted to get up to the top. I really wanted my own table, I knew that was the key. I was looking for a way to do that and I realised there wasn’t a shop in my local area. I just thought it would be a good idea to get my own table and run it as a shop offering cues, cases and things like that. It all fell into place as I did my WPBSA coaching badges for level one and two, so I was able to offer coaching out of the shop as well. It all came from that.

“When I first joined the women’s tour I was a self employed personal trainer. Now I’ve qualified as a coach, got my shop open and have began building up some clients for coaching. Once I had a few of them, I was able to leave my job as a personal trainer and concentrate fully on the shop, coaching and snooker. It enables me to be around a snooker table all of the time and as much as I want. It’s really good and a total drastic change to my career path and what I want to achieve in life.”

Despite losing out to On Yee, what was it like competing at the Crucible for the Women’s Tour Championship?

“There have been so many good opportunities since I started playing on the tour. I could never have thought it would be possible to get there and to play at the Crucible Theatre. It was absolutely fantastic. I really hope we can get there again and maybe have a longer format to really showcase what we can do. I was very nervous this time, so hopefully if I can get there again then I can keep my nerves in check.

“It was all very surreal. Playing on the women’s tour we are used to noise and tables next to each other. Once I sat down and we broke off you could hear a pin drop, I could hear my heart beating and it was so silent. I’ve never played in such silence. It was very strange, but a fantastic experience.”

Evans and On Yee were recently awarded two-year cards on the World Snooker Tour. How big can that be for the women’s game as a whole?

“It’s just absolutely fantastic news. The women’s game needed something else. It either needed a cash injection to increase participation or to have the carrot of being on the professional tour to aim at is massive.  It’s going to get us all to put more hours in, it will inspire young girls to see them on television and pick up a cue themselves. I think it is fantastic and very exciting for the future of the women’s game.

How much are you looking forward to the experience of travelling to Sheffield and competing in this year’s Betfred World Championship and will you be looking out for anyone in particular in the draw?

“I didn’t think in a million years I’d get the chance to be in the World Championship. I’ve been a bit fortunate with the pandemic that On Yee couldn’t make it over and I have got in. Another thing with the pandemic is that my shop can’t be open currently, so I’ve been able to really put the hours in. I’m going to try to really grasp this opportunity, put the work in and test myself up against the professionals.

“I’m not going to be too fussed about who it is and who comes out in the draw. It would be amazing to get Hendry, but I don’t think we can with the way the seedings work. I’m sure whoever I get, they will be far more scared of playing me than I will be of playing them. It’s a brilliant opportunity regardless and I know if I take my chances then I could win. I just have to focus on my game no matter who I am up against.”