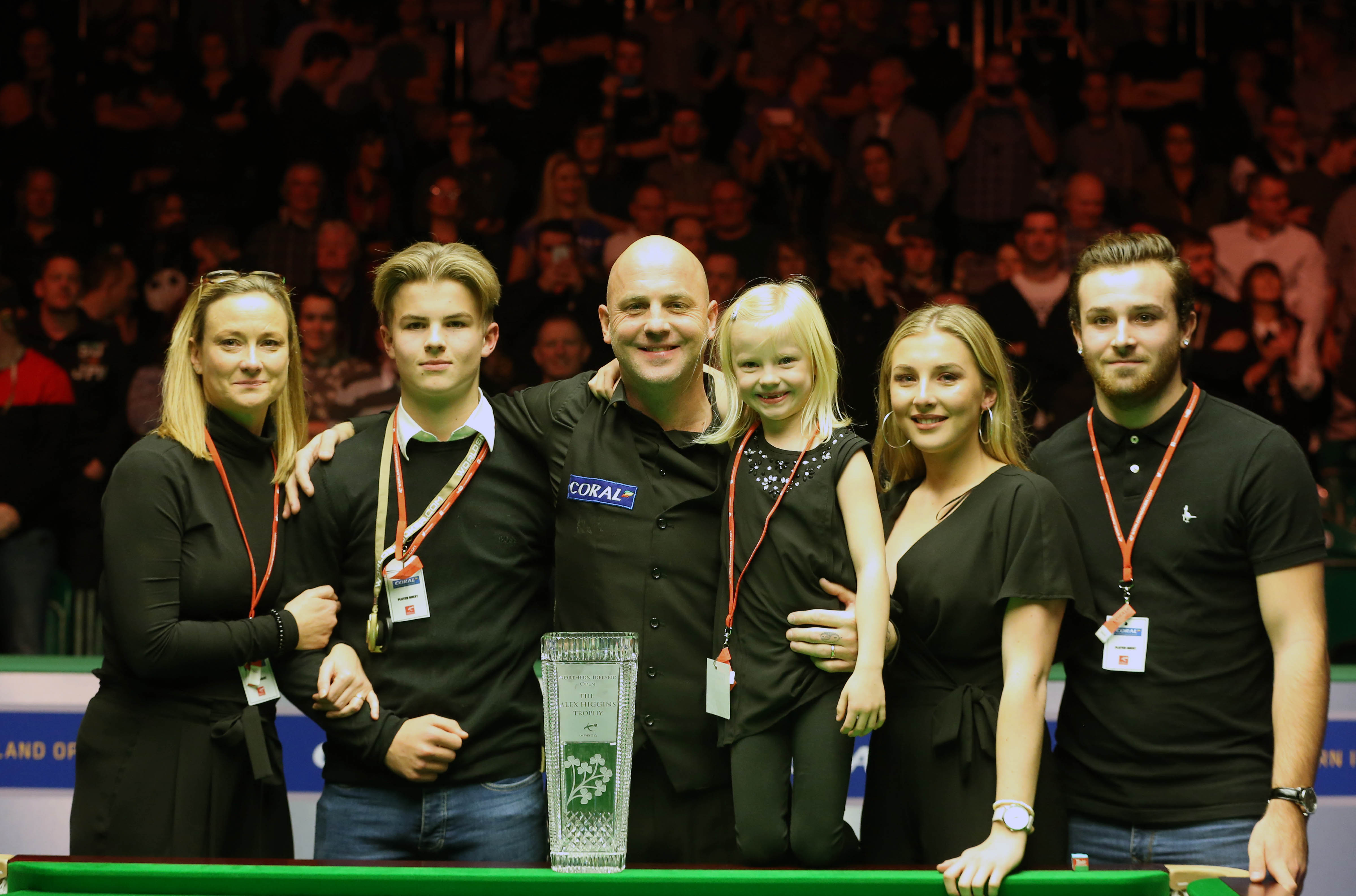 King celebrates with his family.

There are moments in sport when years of blood, sweat and tears pay off, there is no better example of this than Mark King’s greatest match…

Over the past few weeks we have been asking players to name their greatest matches. It’s not difficult to decipher which one King has opted for. After 25 years as a professional, King was finally crowned a ranking event winner following a dramatic and emotional 9-8 win over Barry Hawkins in the 2016 Northern Ireland Open final.

King was going through a turbulent time in his career and had even considered hanging up his cue ahead of that trip to Belfast. However, he had started working with coach Chris Henry a year prior to his Northern Ireland Open victory and what they did together was about to pay off in a big way.

Conversely to King’s concerns regarding his form, much of what Henry had taught him to do involved positive visualisation. Ranking event wins and success were very much a key part of his thought process.

“Just before that event I was actually thinking about quitting. I wasn’t in a good place, I wasn’t playing well and I could barely pot a ball. I was wondering to myself what I was doing, why I was playing. It then all clicked together,” said now 47-year-old King.

“Sometimes I go to the table and my head can be in a jam jar. At that point I don’t want to be there or hit a ball. It is all about doing the mental preparation and being in a place where you can deal with and be comfortable in certain situations.

“I did loads of visualisation before that event, starting from when I first met Chris back in 2015. I don’t know whether it was just a case of having done so much of it that it all came out in Northern Ireland.”

At the very heart of those visual preparations was King’s family. The Essex cueman used the image of his family witnessing him compete for a title as a motivating factor as he chased that golden winning moment.

King’s father Bill is a well liked figure around the tour and has followed his son around the world over the years. Unfortunately, Bill was unwell during the 2016 Northern Ireland Open and couldn’t travel there, but when Mark returned with the trophy it was an emotional moment.

King said: “For me, the family was the be all and end all. The family had to be there. I visualised them seeing me do it thousands and thousands of times. If I had won in China it would still have been good, but for everyone to be there apart from my dad, was just magical. That is what you strive for. I’ve seen other players before, like Mark Selby and John Higgins, have their families come out and I thought to myself that I wanted a piece of that. I wanted to do that and have that joy. I wanted the feeling that for that week I was the best. To not be thinking about a missed red that cost me a place in the semi-finals or whatever it might be. To go home and have the trophy and say it was my week was great. I didn’t have to go back to the drawing board.

“I took my dad to the club in Chelmsford to see the trophy when I got home. It was quite emotional. He also came with me to the UK Championship and we got interviewed by the BBC. He couldn’t string a sentence together because he was so proud. He was very tearful. It was so lovely to see. All that driving up and down the country for me and doing everything he could to allow me to achieve, it was worth it for that moment. My dad is 88 now and he wasn’t a young man then. You start to wonder if he was ever going to see it and it was so nice he did.”

The match itself provided nerve shredding tension in front of a packed out Belfast crowd. The early stages appeared to be going the way of former Crucible finalist Hawkins, when he established a 5-1 advantage. However, King summoned a typically steely showing in the last two frames of the opening session to end just two behind at 5-3. 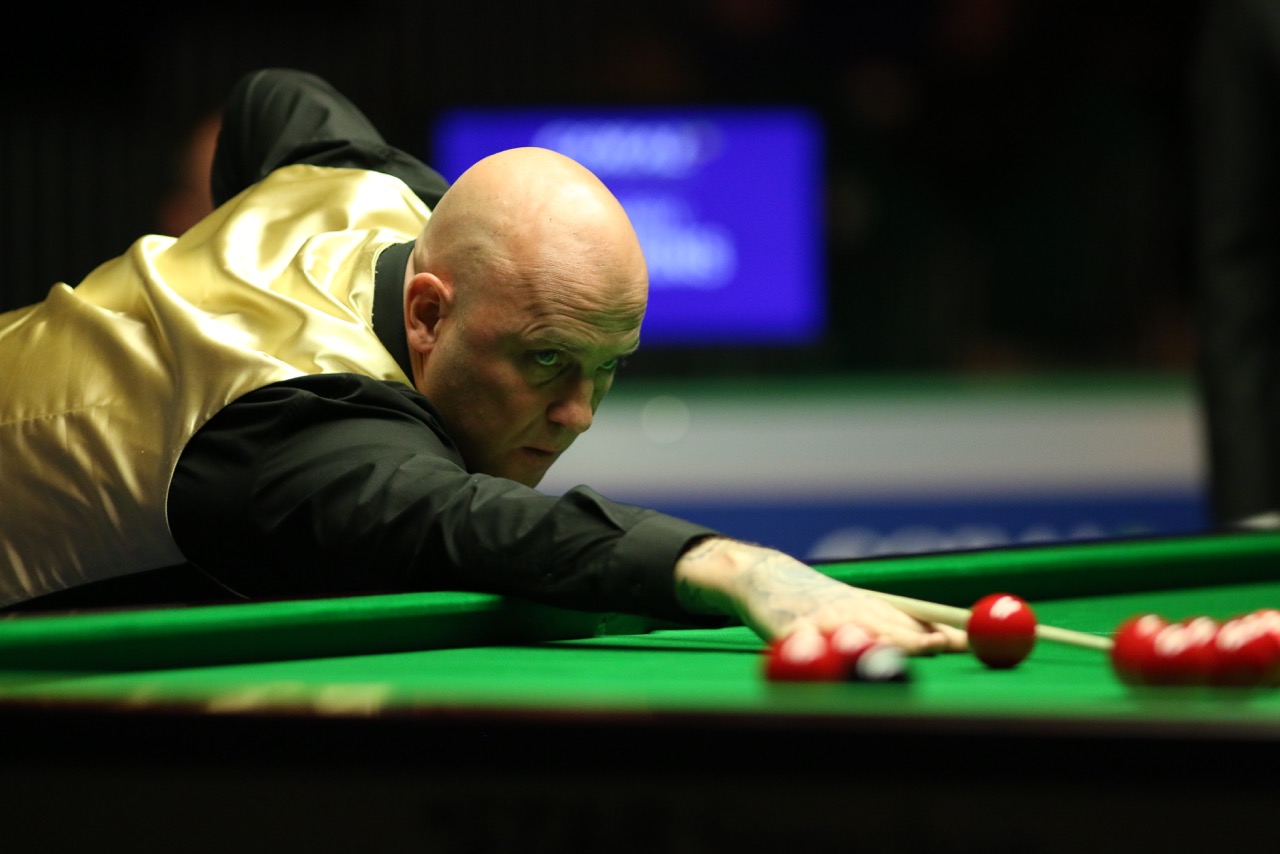 When they returned King continued to push for the ascendancy and he got it when he managed to move just a frame from glory at 8-7. He required a seven-point snooker to force a re-spot in an incredible 16th frame. Only the pink and black remained on the table, but the black was over the top right corner. He managed to place the pink ball impossibly on top of the black with one of the shots of his career. Hawkins fouled, but won the re-spot to force a decider.

Despite the obvious disappointment of losing out on the penultimate frame, having battled back from an almost impossible position, King regained his composure and controlled the decider to seal his maiden title. He says that part of his coolness under severe pressure can be attributed to a belief which flowed throughout the event, that it could be his week.

“I beat Igor Figueiredo in my first game and played really well, then my tip split and I had to put a new one on. I played Liang in the second game and was really good. Every match I got a bit better and people were missing game balls against me. It felt as if it was meant to be. Despite all that, I needed the mentality the whole way through. At 5-1 down in the final against Barry I said to myself that I needed to get going and start trying. He wasn’t going to give it to me. I had to start playing. I remember going to the table and having played six frames and I thought to myself that I hadn’t really turned up.  I went on and played some of the best stuff I had ever produced. That is where the visual preparation kicked in.

“At 8-7 up, I came out and my little girl Polly was out doing cartwheels and the splits outside the arena. That just calmed me down a little bit, seeing her happy. I thought worst case scenario I have my three gems here and my wife. I left everything on the table and it is just nice to come out and be a champ.

“It was a surreal moment when I potted the green and realised I had done it. I was waiting for the family to come out and everything I had dreamed of and visualised in my mind over the years had finally happened. It was an unbelievable achievement and an unbelievable feeling.”

It was a victory which proved to be extremely popular throughout the snooker world. However, for King the fire to claim silverware still burns strongly. He admits that he has a desire to prove wrong anyone who may think that moment was a pan.

“I want to win again and in recent years I’ve probably changed too much searching for it. I’ve realised that tinkering with my game isn’t a good thing. I’ve tried some things and they weren’t for me. Sometimes you can get too technical. I don’t think I’m a technical player. I am one of those people that gets down, sees the shot and plays it. Someone like Selby is so good at what he does. He is a technician, but I’m not. Sometimes you have to come through the bad stuff to get to the good. The technical things probably put me back a year but I have gone back to basics.

“I am still playing because I want to win again. I don’t want to just pick up the money. There are a lot of people who will think that I will never win another trophy. They will think that was my week and that I’ll never do it again. I want to shut them up, do it again and show that it wasn’t a one off.”

Tickets for this year’s BetVictor Northern Ireland Open, where King is in action, are still available. The best players in the world will be at the Waterfront Hall from October 9th to 17th and you can be there to witness them in action for as little as £7. Click here to book now.