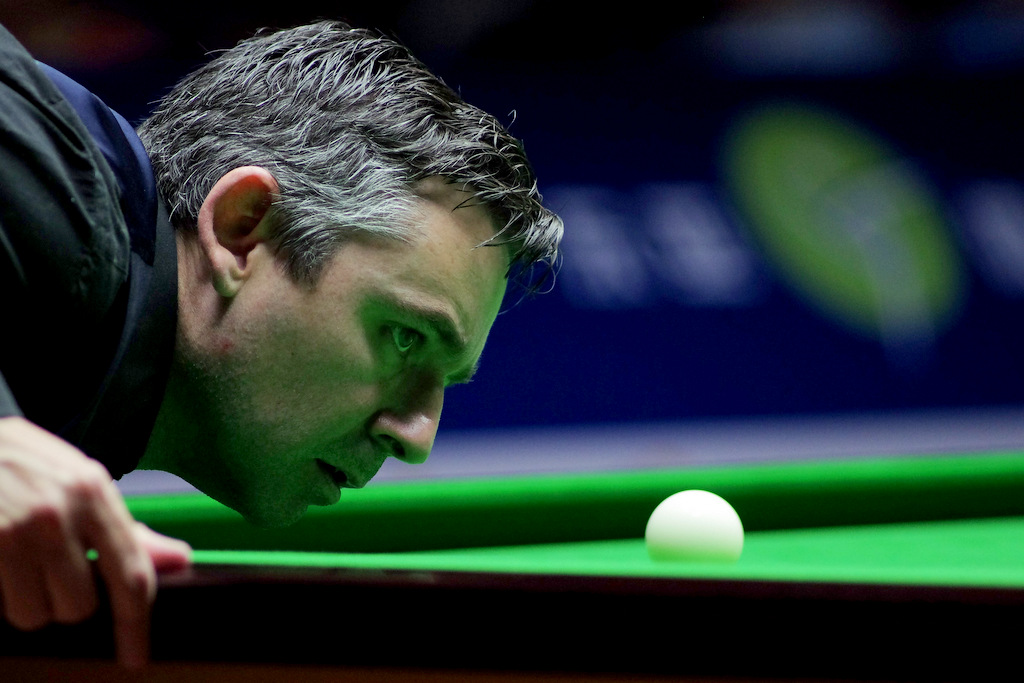 When you think of classic Wembley occasions involving Scotland, you would normally envisage the Tartan Army rocking up to take on the ‘Auld Enemy’ England. However, on February 13th 1994, the old Wembley Conference Centre, hosted an all-Scottish affair which truly captured the imagination.

At the time, Stephen Hendry appeared to be unbeatable at Wembley. The legendary cueist had yet to lose a match at the venue, since making his debut in 1989. He became seemingly invincible in London, clocking up five consecutive Masters titles and winning 23 matches in a row, on his way to the 1994 final.

Alan McManus had turned professional four years previously, and having won the Masters qualifying event in his first season, he had appeared at Wembley twice prior to his 1994 victory. In 1993 he reached the semi-final stage, but was denied a place in the final by Hendry, losing 6-4.

Their showpiece clash 12 months later provided tension befitting of such a big occasion. McManus trailed 8-7, before winning a tightly contested 16th frame to force a decider. In the end he produced a typically gutsy break of 76 to snatch the title and secure what would prove to be the biggest win of his career to date. Looking back, McManus admits that an incident in that 16th frame proved to be a motivational catalyst. 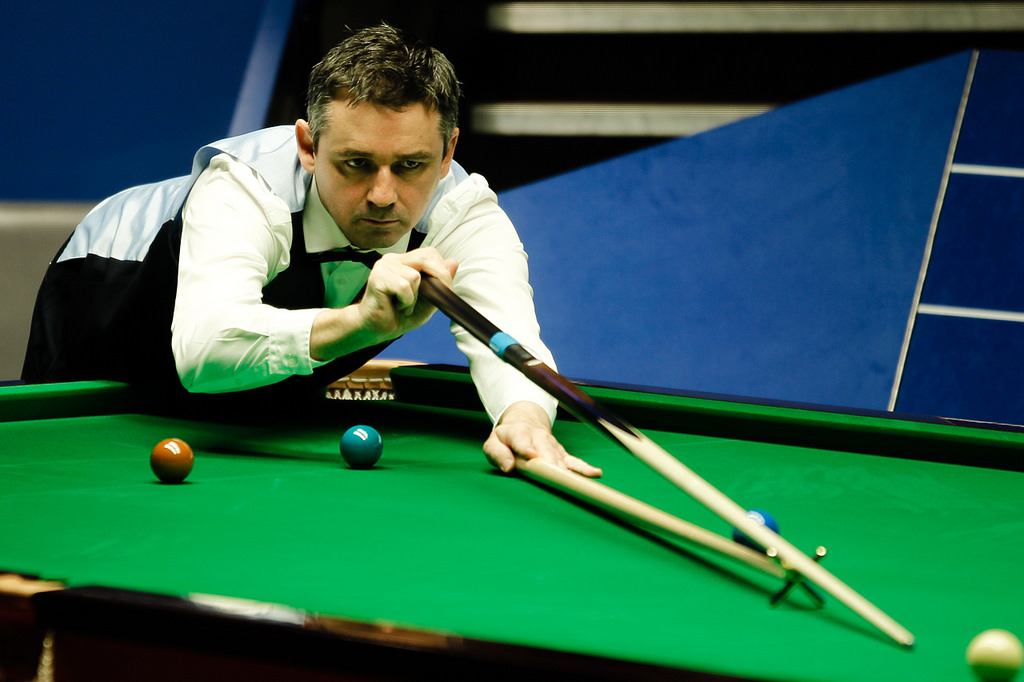 The Glaswegian said: “I had snookered him at 8-7 down. He got out of it and fluked the snooker back. I looked over to him and there was a wee grin on his face. It wasn’t a bad thing, but it was the sort of grin that said, ‘I’m going to win now’. I thought to myself, ‘no you are not’. It annoyed me. That perked me up and I got a bit angry. I left the arena before the decider to compose myself. You were sort of down in a dungeon in the old Conference Centre and you would emerge at the top of the stairs to a huge crowd. When I came out it was noisy. All I can remember was the noise. I realised this was a big moment.

“I definitely sensed the crowd wanted me to win. It was quite apparent that they didn’t want Stephen to win it again. Looking back, I think that helped me. It was a bit like a football game. You could really feel the vibe there. I played Steve Davis once and they were calling me a sweaty sock. I couldn’t bite my tongue and I said something to the crowd during the match. It was that sort of place. Very intense. When I played Stephen, I think the fact there were two Scotsmen in the final, with Wembley Stadium just down the road, was pretty cool. The Conference Centre was an amazing place to be.

“To beat Stephen made it more special I suppose. How do you win that event five times in a row? Not just that, but your first five times ever playing in the event? People don’t appreciate what a phenomenal record that was, because it happened so long ago.”

For Hendry the defeat was a bitter pill to swallow. The run was never going to last his whole career, but for it to be ended in a deciding frame was particularly gut-wrenching. He admitted in his autobiography Me and the Table that losing hadn’t even entered his mind.

Hendry wrote: “It’s a hell of a scrap and I fight all the way in hope of gaining a sixth consecutive title. I feel I own this event; having won it so often it truly belongs to me. But this time it’s not to be and I’m nothing less than devastated. I concede in the deciding frame and I’m completely gutted to see Alan holding the trophy this year. The look on our faces say it all; neither of us can believe it’s happened.” 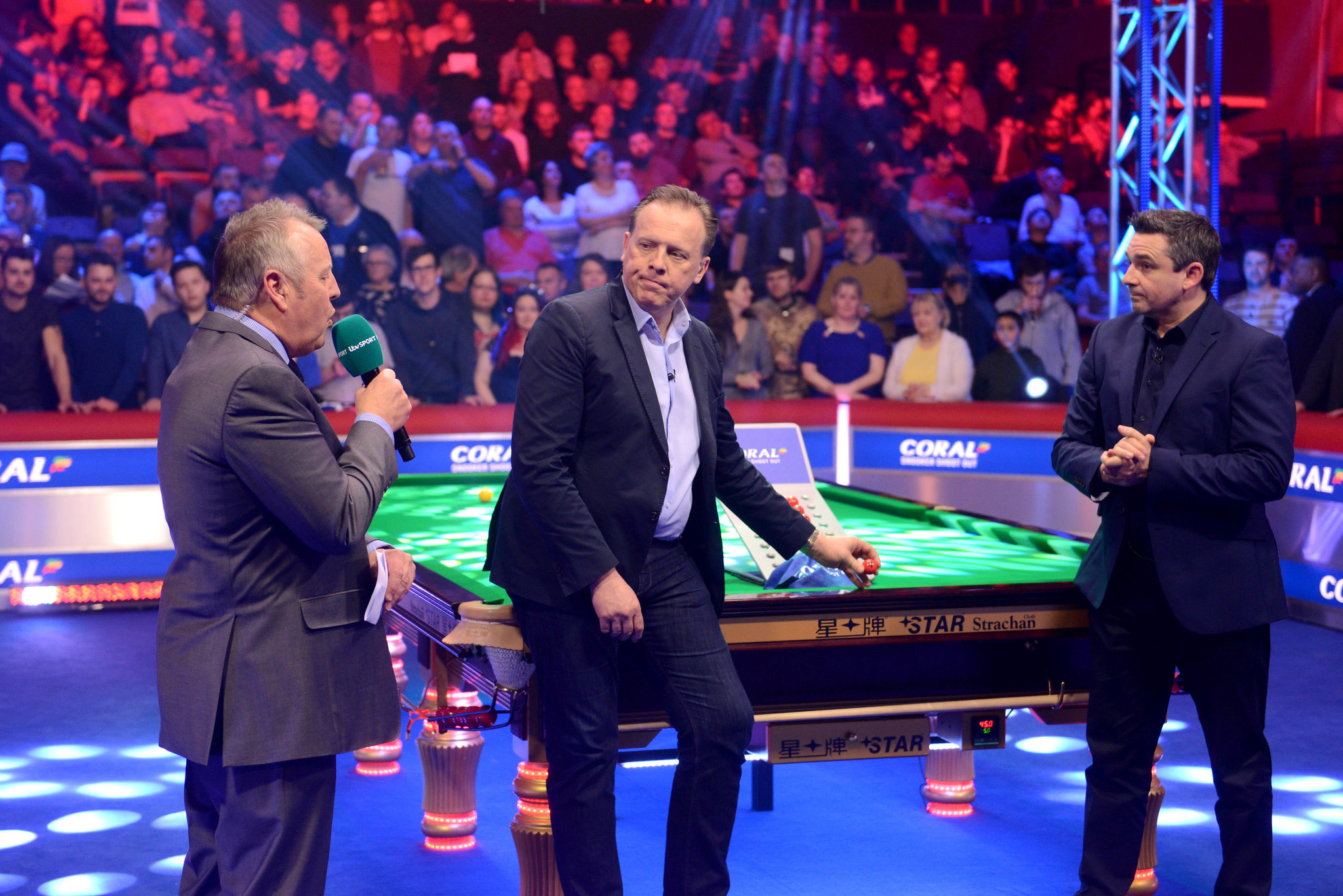 McManus with Foulds at the Shoot Out.

Neal Foulds faced McManus in the semi-finals that year, where he lost out by a 6-4 scoreline. Foulds believes that McManus’s unflappable demeanour was key to earning him the victory and ending Hendry’s reign.

“Even before the semis, you always felt it would be Hendry in the final. You had that looming over you. He had never been beaten at Wembley and it was such a fantastic record. It was almost like he was invincible at the place. I’m not so sure I’d have beaten him in the final,” said former world number three Foulds.

“We had a tournament the following week straight away in Bournemouth. Alan was there and he was pretty cool about the whole thing, despite it being such a huge win. I think one of the reasons Alan beat Stephen is he is a fairly undemonstrative bloke and just played the balls as they were in front of him. Sometimes with Hendry you could be beaten before you even started. Alan didn’t treat him that way.”

McManus continues to compete on the World Snooker Tour 27 years on. Both he and Hendry, alongside Foulds, are now among the most respected commentators and analysts in the sport. Snooker journalist and broadcaster Phil Yates has sat alongside all three in the commentary box and covered the 1994 Masters final for newspapers and radio from the press room. He believes that the steeliness of McManus’s 76 break in the decider cannot be underestimated.

Yates said: “That break in the final frame was just simply brilliant. If it had come in the opening frame it would have been a great one, let alone with the Masters title on the line. Considering the pressure, it was exquisite.

“Alan has a really good temperament. If you want to see the embodiment of a snooker person, then he is that. He obviously plays for titles, fame and money like everyone else. However, Alan is a snooker person through and through. He loved the game back then and he loves it now. That is why he is so good on the TV. Commentating isn’t a chore to him and it isn’t just a means of earning money. It means watching the sport he loves. That is why I personally think he is one of the very best commentators in snooker.

“I think for Stephen, heavy was the crown. He wasn’t just there as the defending champion, or the best in the world, or the tournament favourite. He was trying to protect a ridiculously lengthy unbeaten record. He also had an added pressure of facing another player from Scotland. That match predates John Higgins’s first ranking event win. Alan was the first person to genuinely threaten his monopoly over Scottish snooker. Those pressures were all working against him, but one thing is for sure, that his winning streak record will never be beaten. To do that you need to win six Masters on the trot and that isn’t happening. Nowadays, the top 16 are so good that the law of averages would prevent it.”