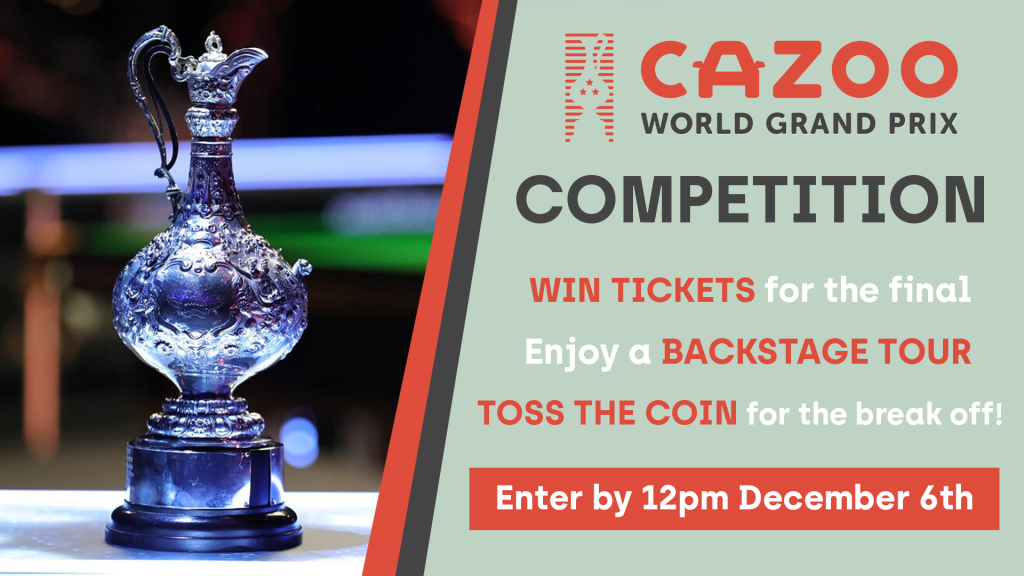 Snooker’s greatest players will be in Coventry later this month for the Cazoo World Grand Prix, and here’s your chance to win tickets to the final PLUS come backstage for an incredible money-can’t-buy experience.

The winner of this exclusive competition will come backstage before the final starts, enjoy a tour behind the scenes, then join the official referee to spin the coin to decide which player breaks first.

The Cazoo World Grand Prix runs from December 13 to 19 at the Coventry Building Society Arena, featuring the top 32 players on the one-year ranking list.

Top stars on target to qualify include Ronnie O’Sullivan, Judd Trump, John Higgins, Neil Robertson, Mark Selby and Kyren Wilson. Televised by ITV4, the event will be packed with the best green baize kings on the planet.

The competition winner will receive two tickets to both sessions of the final on Sunday December 19th plus a rare opportunity to come backstage at a major sporting event. The prize also includes one night accommodation in the on-site hotel.

For a chance to win this unique prize, send an email to [email protected] with your name, phone number and postcode.

Entry deadline is Monday December 6th and the winner will be notified within 48 hours.

Please note that travel expenses are not included in the prize.

If you are not lucky enough to win the competition, you can still buy tickets, which start at just £15…a fantastic Christmas present for anyone who loves live sport! For full details click here