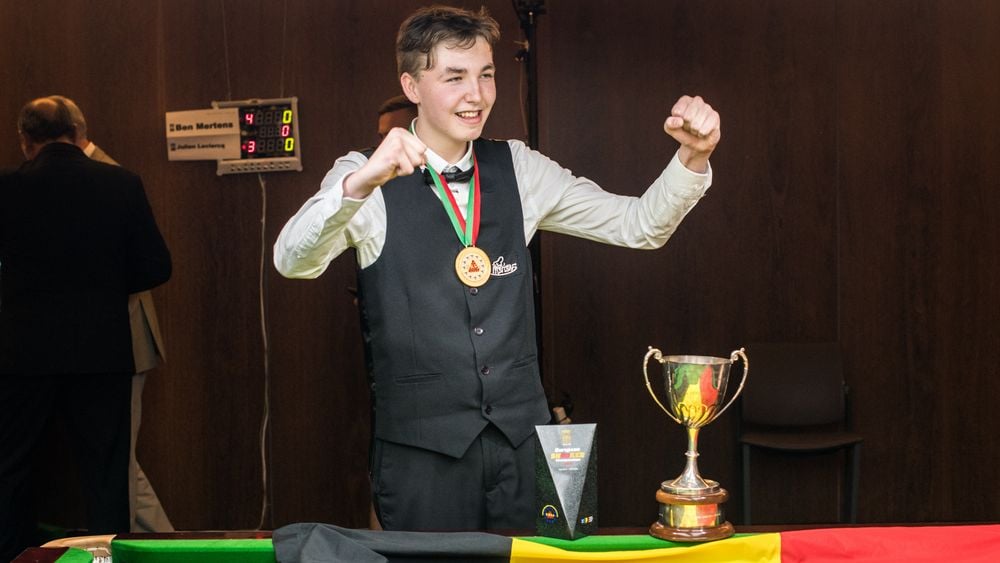 Belgium’s Ben Mertens pipped fellow countryman and close friend Julien Leclercq 4-3 on the final pink in the final to win the 2021 EBSA European Under-18 Snooker Championship in Albufeira, Portugal.

Youngsters from 23 different nations across the continent took part in the sixth edition of this annual event that has previously been claimed by Welshmen Tyler Rees and Jackson Page (twice), and the Republic of Ireland’s Aaron Hill (twice).

Mertens and Leclercq were the star performers throughout, not dropping a frame during the round robin phase and qualifying for the knockouts as the top two seeds.

During the knockout portion, 16-year-old Mertens defeated Oliver Briffett-Payne (Wales) 3-0, Kledio KaÇi (Albania) 3-1 and then Alex Currid (Republic of Ireland) 4-0 to reach the semi-finals where he fell behind early on to opponent Liam Graham (Scotland) – who made a 122 – before coming through 4-2.

Left-hander Leclercq’s only moment of panic in the tournament came at the quarter-finals stage when he went 2-0 down to Poland’s Antoni Kowalski before racking up four consecutive frames which included an effort of 135 – the highest of the tournament. In the last four he dispatched Hungarian 14-year-old Bulcsú Révész 4-0.

The final was understandably a nervy and close affair with never more than frame in it and several decided on the colours. Both had half chances in the seventh and deciding frame, but when 18-year-old Leclercq agonisingly jawed a long green, Mertens stepped up to coolly pot green, brown, blue and then a fiendish pink along the baulk cushion to secure the biggest title of his career to date.

Mertens – the youngest player ever to win a qualifying match in the world professional championship – will immediately turn his attention to the EBSA European Under-21 Snooker Championship which also takes place at the Vidamar Hotel Resort in the Algarve. The winner will receive a lucrative two-year World Snooker Tour card. Coral Series Century Total Up to 39