John Higgins admits he had “crazy thoughts” after a shocking error towards the end of his first round clash with Thepchiaya Un-Nooh at the Betfred World Championship, but the four-time champion composed himself in time to win 10-7 and reach the last 16.

Higgins recovered a 5-4 overnight deficit to win six of the last eight frames, booking his eighth consecutive appearance in the second round at the Crucible and a match against Luca Brecel or Noppon Saengkham. 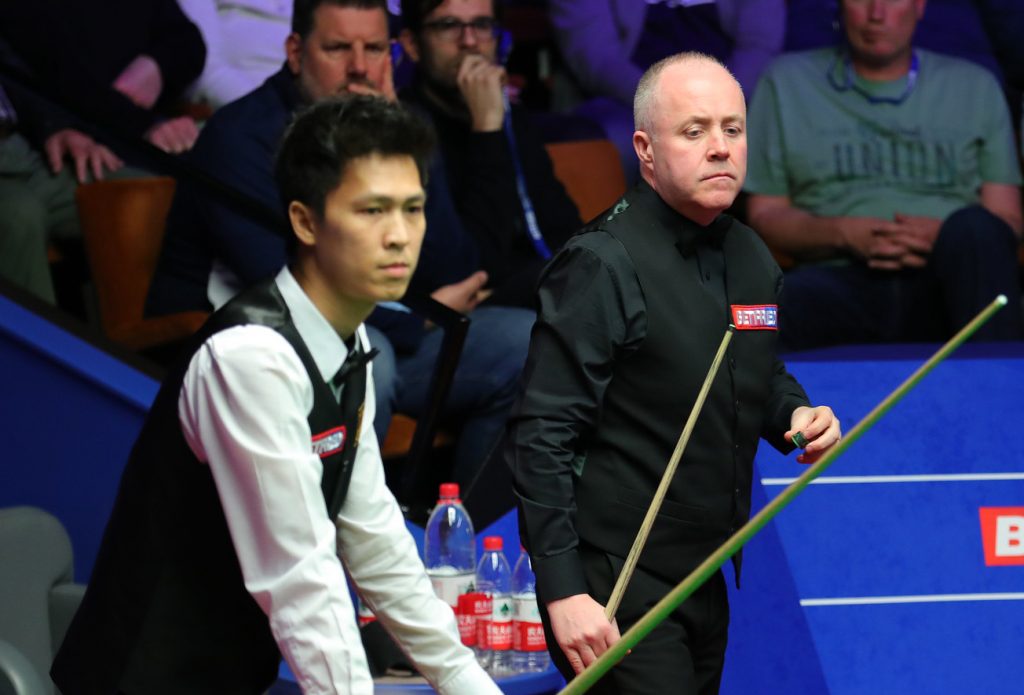 Higgins has lost five finals this season, though he did win the Championship League

But it was not straight-forward for legend Higgins as he suffered a nervous spell after letting Un-Nooh back into the match in frame 15. Poised to go 9-6 ahead and leading by 21 points after potting the last red, Higgins took the black and attempted to screw back for position on the yellow, but sent the cue ball into a centre pocket. The Scot lost that frame and then made several more errors in the 16th as tension took hold. But Un-Nooh couldn’t capitalise and Higgins was able to regroup.

“When I went in-off in the middle bag, I felt numb at that point, as if someone had taken me out of my own body,” said Higgins. “That’s when some crazy thoughts go through your mind. But I managed to get to ten first. I’m delighted because I felt like I stood up quite well in the end.”

The business end of the tie was an uncomfortable reminder for Higgins of the recent Cazoo Tour Championship final when he let slip a 9-4 lead and lost 10-9 to Neil Robertson. But this time he crossed the winning line, which will boost the 46-year-old’s confidence as he heads into the last 16 in Sheffield for the 24th time.

Un-Nooh led 5-4 overnight and had first chance in the opening frame this morning but missed a red to a baulk corner on 32. Higgins punished him with a run of 75 to square the match. In frame 11 the roles were reversed as Higgins made 43 before missing the green to a baulk corner, and Un-Nooh capitalised with 77. Higgins dominated the next two frames with runs of 47, 53 and 100 to lead 7-6 at the interval.

In frame 14, Un-Nooh led 37-36 when he failed to pot the penultimate red, playing with the rest, handing Higgins the chance to double his lead. After his mistake in frame 15, world number six Higgins feared he had squandered the 16th as well when he missed the black when playing for the yellow. But crucially Un-Nooh rattled a tricky yellow in the jaws of one baulk corner, leaving it for Higgins to go 9-7 up. Another error from Un-Nooh, on the pink to a centre pocket early in the 17th, proved his last meaningful shot as Higgins compiled an excellent 65.

“It’s always more nerve-racking in the first round because you just want to get through and get into the tournament,” said Higgins. “Every draw is tough but for Thepchaiya, it was almost like he had a free hit coming in after almost falling off the tour this season. I thought his scoring was great but he missed a couple of balls. Everyone does that – it’s difficult out there.

“I feel as if I am hitting the ball well at the moment. That can get better the longer I stay in the event. It was amazing to have the crowds back, after what’s happened in the last couple of years. It adds to the tension and everything else you feel.”

Un-Nooh has qualified for the Crucible four times and be drawn against Higgins twice, Judd Trump and Ronnie O’Sullivan, losing all four. He said: “John played well today, I didn’t get that many chances from him. I lost my focus near the end. The yellow I missed at 8-7, it was a really difficult shot to get the cue ball back to the green. I was thinking about where the white was going rather than aiming at the yellow. After that my head was gone, then I missed an easy pink in the next frame.

“Hopefully next time I come here I can win a match. Having made it through the qualifying rounds I have a lot more confidence going into next season.”