Ones To Watch - Florian Nuessle

Anyone following Florian Nuessle’s Facebook page in recent days would have seen him trying to make a 147 on a live stream – and in fact the 18-year-old Austrian achieved the maximum on Wednesday this week.

His intention is to recreate the pressure which competitive snooker brings – an indication of how determined he is to develop his career path towards the pro tour.

Nuessle first held a cue in his hand at the age of five. He was also a keen footballer and golfer in his childhood but by the time he was 12 he had decided that snooker would be his profession. 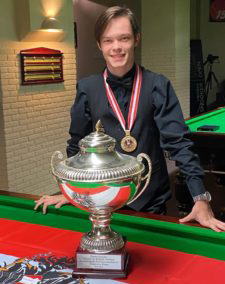 Rapid Vienna: Nuessle won the final of his national championship in the Austrian capital in just 80 minutes

He has dominated the local scene in Austria, winning the national championship for the first time in 2016 at the age of just 14. He has now won that event four times in a row – a phenomenal record for a teenager. This year in Vienna he dropped only one frame in the entire tournament. The final lasted just 80 minutes as he beat Jerome Liedtke 5-0 with breaks of 55, 64, 61, 86, 60 and 67.

The international scene is tougher of course, but in 2017, at the age of 15, Nuessle enjoyed a tremendous run to the semi-finals of the World Amateur Championship before losing 7-4 to experienced Pankaj Advani.

The following year he was runner-up to Jackson Page at the European Under-18 Championship. He has had tasters of the pro tour – representing Austria alongside Andreas Ploner at the 2019 World Cup, and competing as a wild card in the BetVictor European Masters qualifiers this season, where he lost narrowly 5-4 to Jak Jones in a match which came down to the final black.

And that has given Nuessle the hunger to make the jump to pro level. “I definitely want to earn a living through snooker, which is only possible on the main tour, so that’s the goal,” he said. “I love the tense pressure in big moments in snooker.”