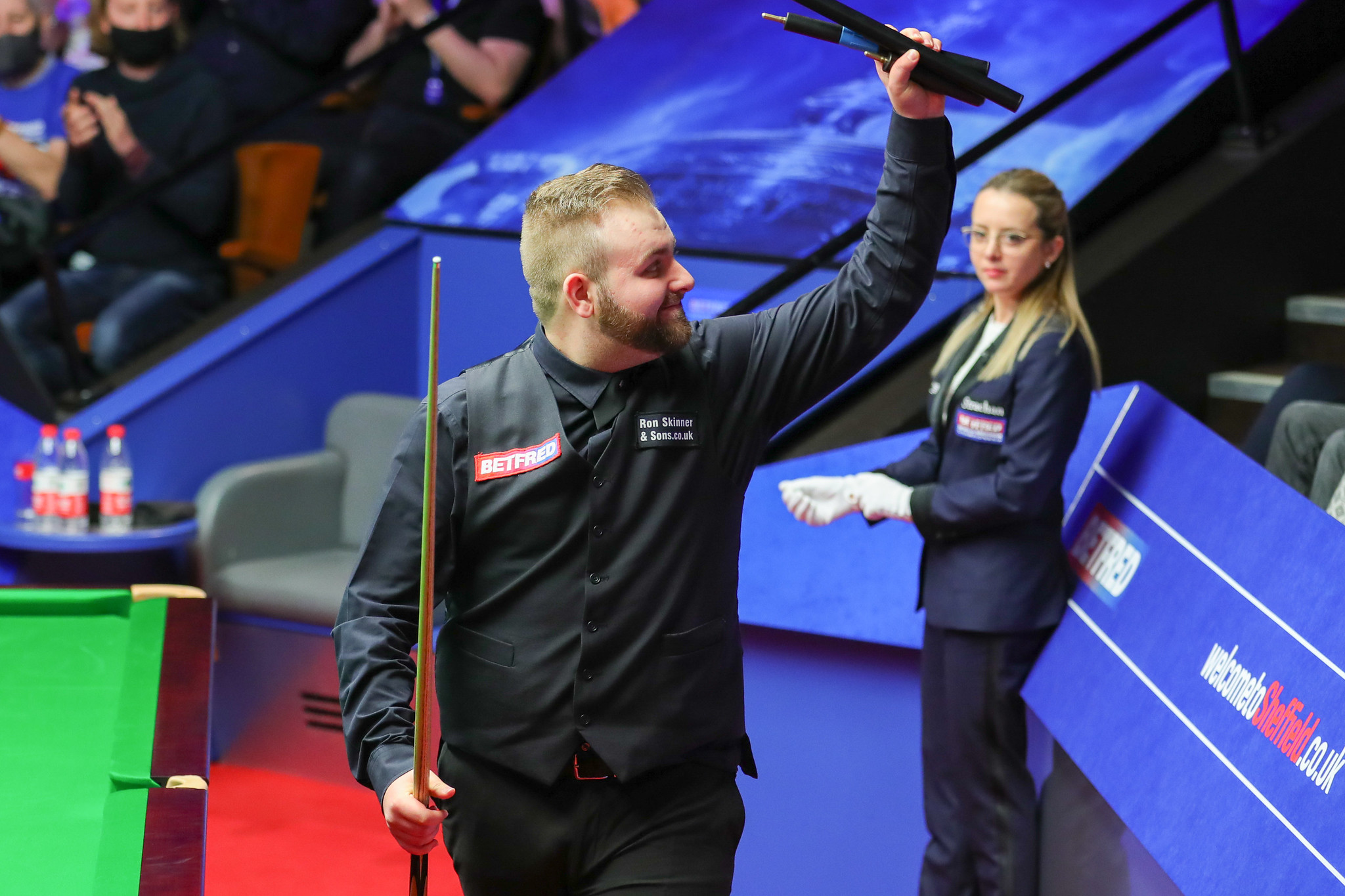 Jackson Page made his debut on snooker’s biggest stage by earning a maiden appearance at the Crucible Theatre last month, now he’s aiming to solidify his place at the sport’s top table.

The 20-year-old came through all four rounds of qualifying to make the final stages of the World Championship for the first time. Once he got there, he faced stern opposition in the form of 2013 runner-up Barry Hawkins.

A tightly contested encounter was in the balance right up until the closing stages. However, Page crossed the line in style with back-to-back century runs of 128 and 135, at 8-7 up, to score the 10-7 win.

Page immediately settled in the imposing surroundings of snooker’s Theatre of Dreams and said he was ready for the close proximity between the fans and the table.

“I was expecting it. To be fair, the first time I ever saw the venue for the two table setup was walking out to play my match, but I knew what it was going to be like from what I’d heard. The crowd were brilliant and I really enjoyed that. It is the Holy Grail of the snooker world and to play there was amazing. Sheffield was all about the snooker and the sport took over for those 17 days,” said Welshman Page.

“I felt comfortable and that I belonged out there. I didn’t see why I couldn’t carry on my form from the qualifiers and I managed to do it. I expect to play like that in most games, but like other players, it often doesn’t happen. I felt that was the stage I should be playing on. I lost a couple of tight frames in the second session, but to make those two centuries to win the match showed what I am all about and what I can do. I was really happy to knuckle down when the pressure was on and not crumble. Once you have got over the line it is like a lap of honour. You try to give the crowd what they want to see and I enjoyed playing a couple of exhibition shots.”

The following round pitted Page against three-time World Champion and compatriot Mark Williams. Since breaking through at the 2017 Welsh Open, as a 15-year-old, Page has been mentored by Williams, who describes him as being like a fourth son. However, the 24-time ranking event winner administered some tough love on this occasion. 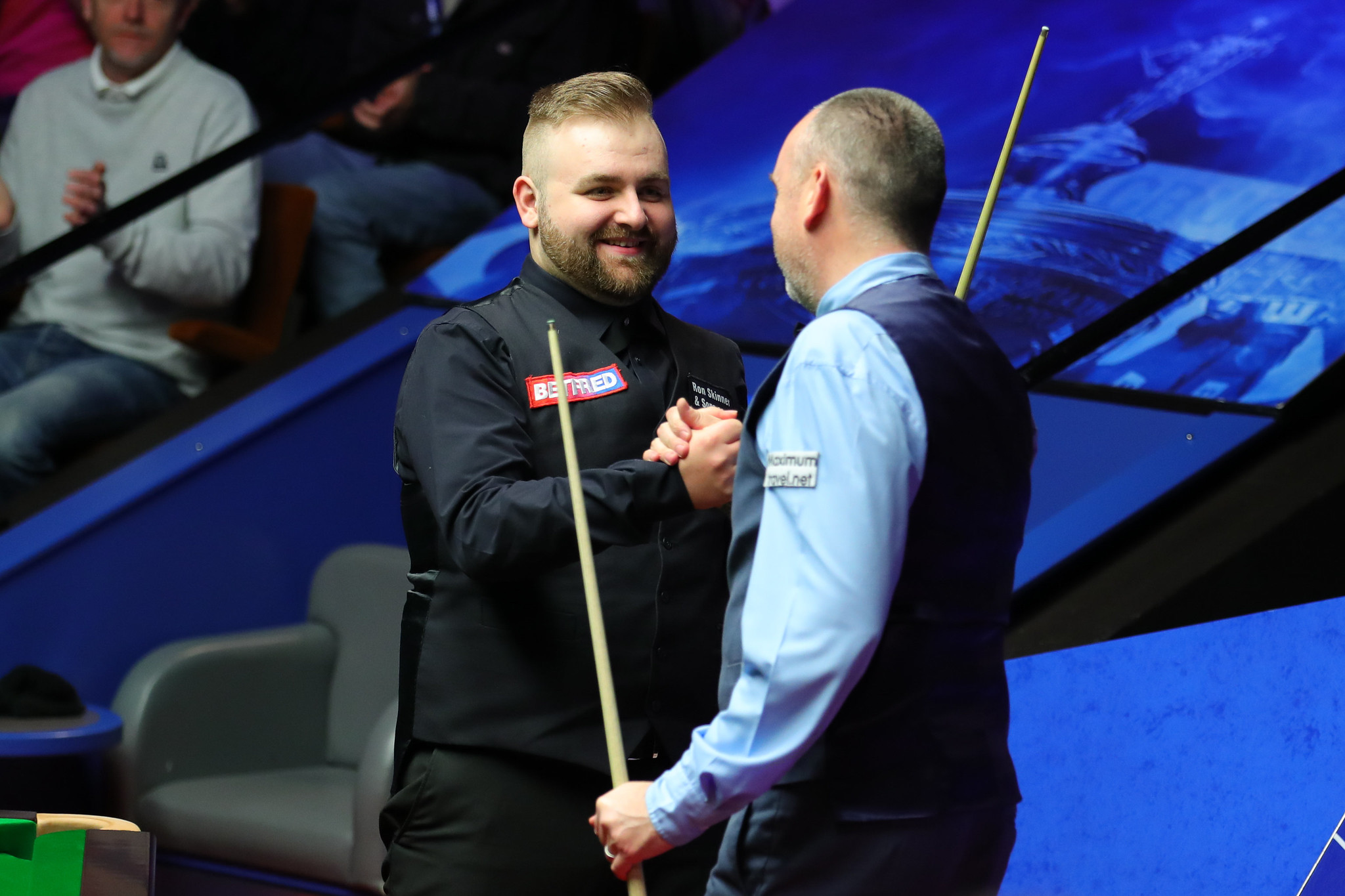 Williams and Page are practice partners

Williams fired in six centuries and a further eight breaks over 50, as he stormed to a crushing 13-3 victory. Reflecting on that match Page feels there was little he could do in the wake of snooker brilliance.

“I’ll be honest, I think you could ask Mark and he would probably say that was up there with one of his best performances ever. Just in terms of the way he played. It was immense. I couldn’t pick many people who have ever played like that in my opinion. He was in a different league and it was even better than he’d be practising in the club. There is nothing you can do against it. You would have to be on top form to even remotely compete. His mind is so creative on the snooker table. It is hard to even see where some of the shots are coming from.

“We enjoyed the experience of playing each other in the World Championship. It was my first time there and Mark had been there many times before. It was nice really, it wasn’t going to make any difference to our relationship who won or lost. He just said to me that next time we play golf not to let him take me apart the way he did on the snooker table!

“I watched the rest of his progress in the tournament and he was unlucky in the semi-final against Judd Trump. Going 7-1 behind in the first session was what let him down. That was probably the only poor session he played in the entire event. He did incredibly well to come back against someone like Judd, it was pretty special. It would have been one of the greatest comebacks ever.”

Williams is famed for his cool demeanour and easy going style around big matches. That is a skill which Page also appears to have in abundance. However, he says it is an ability which he possessed at a young age and predates his relationship with Williams.

Page is also blessed with complete confidence in his game and is now trying to build momentum from his Crucible success. He believes next season can be his moment to break into the winner’s circle.

“I’ve always been exactly the same, even when I was a junior. When I won the World Under-18 Championship, I collected the trophy and everyone around me was crying. I was asking them what they were crying about. All I was thinking about was getting in the swimming pool after winning. I’m not one that shouts too much about my emotions. You hear stories of players down the years, where the mental side of their game has been ruined by defeats. If you lose a few games in a row you can start looking at the rankings and things, but you just have to play at the end of the day. Try your best and aim to win as many as you can.

“I think it is realistic to nick a tournament this year. I want to do that and try to get myself in the top 32 and start targeting the top 16. I’ve always thought I could win an event and every tournament I play in I am trying to win. Since the Crucible, I’ve been given that extra bit of confidence. It has made me realise that actually I can beat any of these players. I think maybe before that the other players would have thought there was no way I could win an event, whereas now they might think I’m someone that is not to be messed with.”