Pagett Keen To Make Up For Lost Time 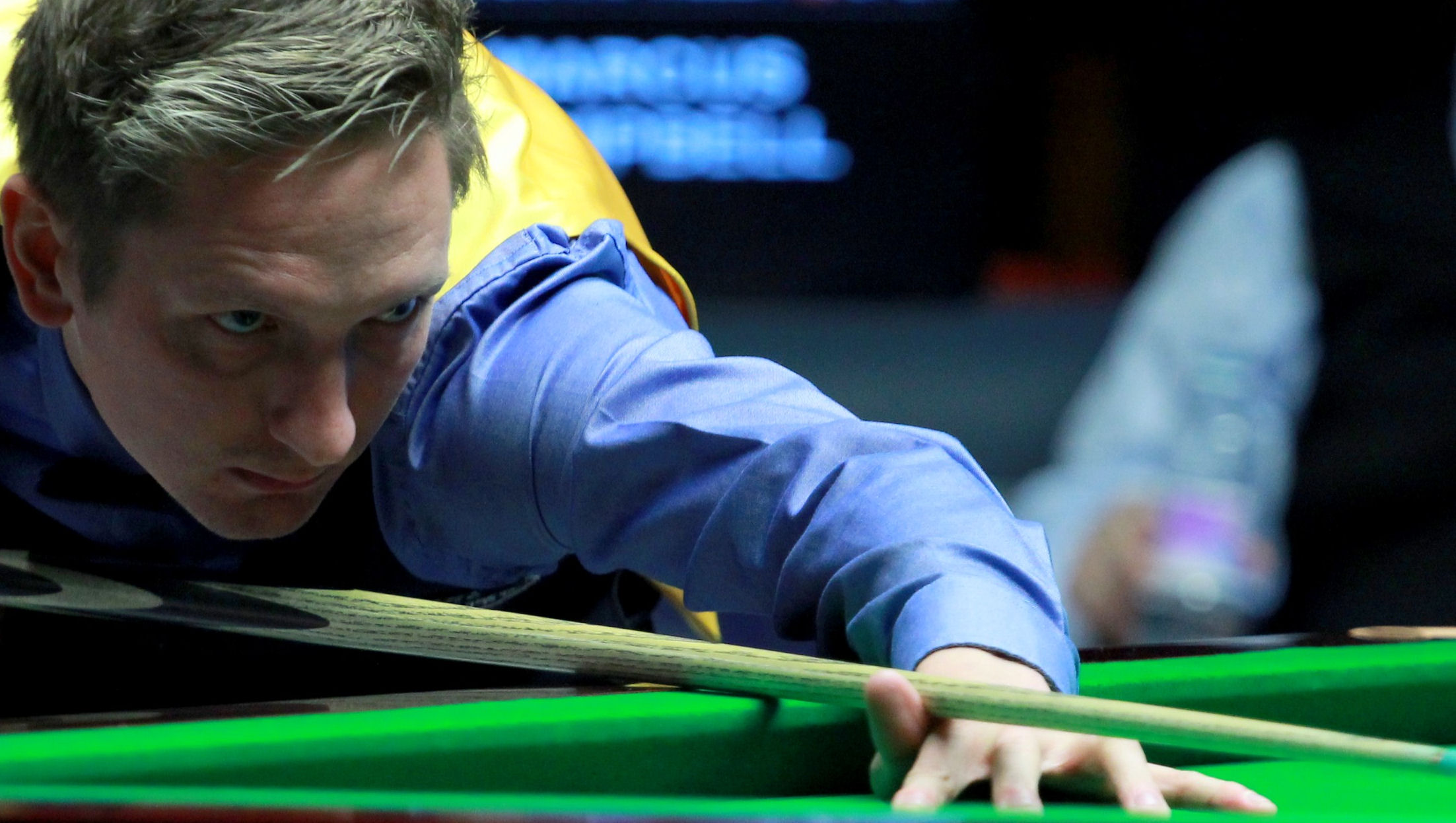 Welshman Andrew Pagett can’t wait to return to the baize after a difficult year of illness forced him to defer his tour card to the upcoming season.

Pagett, who has previously spent six seasons as a professional, was relegated from the circuit in 2015. Following five years away, he earned a return to the World Snooker Tour with his victory at the 2020 EBSA European Snooker Championship in Albufeira.

However, illness struck shortly after his win in Portugal, when he was suddenly hit by the gastrointestinal disease, diverticulitis, which led to a perforated bowel. Due to the circumstances, it was agreed that Pagett’s tour card would be deferred to the beginning of this season.

Thankfully he is now fit and able to resume competing, although there were times Pagett doubted that coming back to the tour would be a possibility.

“It came on all of a sudden and I basically couldn’t digest anything. I became aware of a pain in my groin area and I went down to the hospital,” explained Pagett.

“The doctor said it was lucky that I had gone in, because everything was coming out inside of me. He admitted that if I hadn’t gone to hospital that night, I would have been gone in the morning. There was no question of not going in to the hospital though, as the pain was unbearable.

“They were going to operate there and then, but it was decided that it would be best to try and let the bowel heal. Luckily he said because I was young, we could try to heal it, which it did within ten days. Three weeks later another hole popped on the other side. They had to operate this time but waited for it to heal first and then took ten inches of my bowel away, which was diseased. There were a few dark days following that, not even knowing if I would recover. I went from 11 stone down to just under eight stone four ounces within six weeks.

“There were times that I just thought about giving up. I couldn’t deal with it. Any illness gives you good days and bad days. I’m a pretty level headed guy and I believed that there was light at the end of the tunnel. It did happen. Now I am out of the other side and I’m looking forward to getting going and throwing myself into tournaments and getting playing.”

Pagett’s 10-4 loss at the hands of Alan McManus at the 2015 World Championship saw him relegated from the circuit, after which he elected to hang up his cue. Instead, he fully committed to his discount shop, which he owns in Aberdare.

Although Pagett was content with the idea of stepping away from the sport, in hindsight, he admits that the draws of competitive snooker were too great to keep him away permanently. 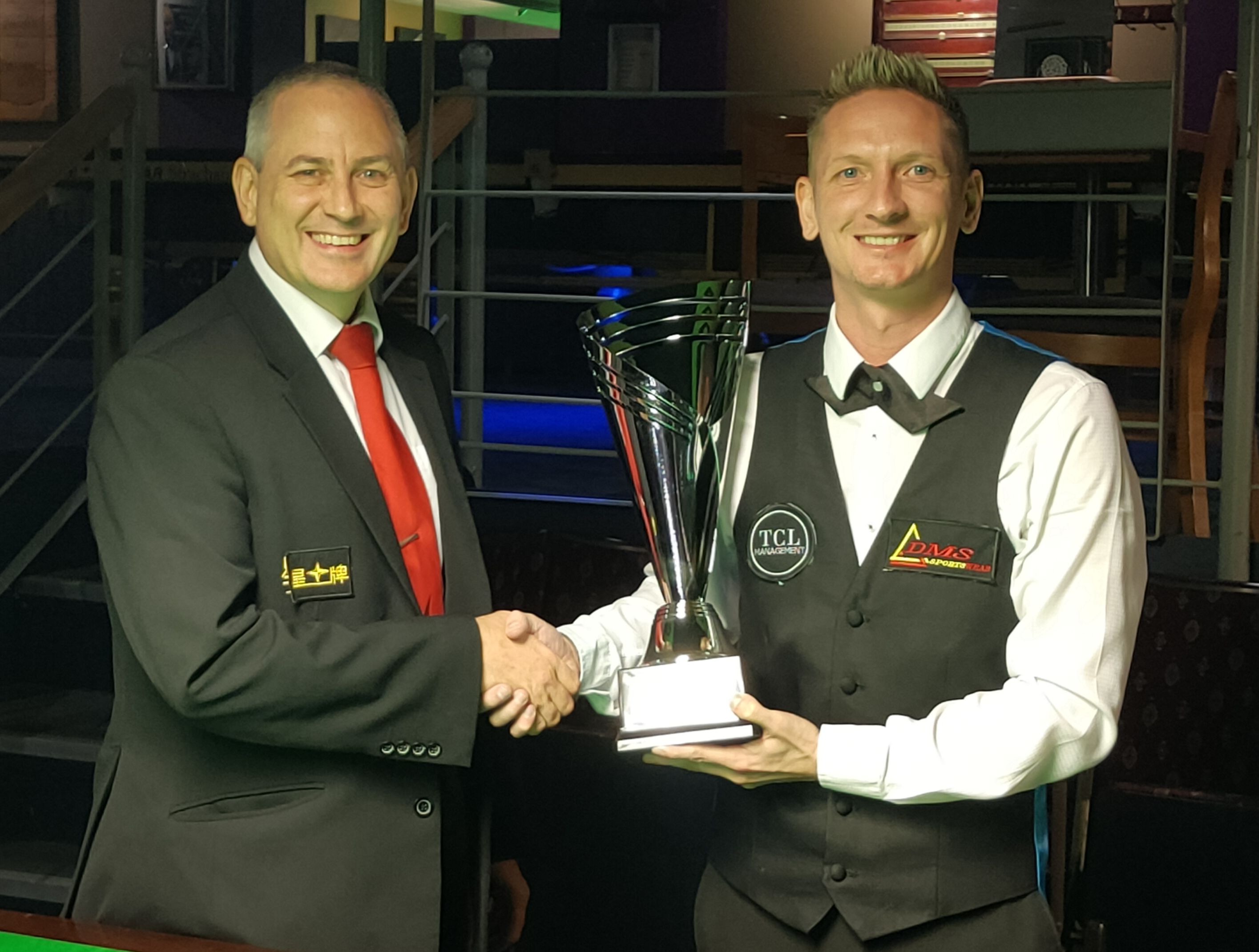 With the trophy after winning a Challenge Tour event in Leeds.

After a successful season on the Challenge Tour, which saw him qualify for a play off for the professional circuit, he won the EBSA European Championship and earned his return to the World Snooker Tour.

“My business, AP Discounts, opened in 2008 and that started to take over my attention from snooker. My father had a discounts shop before me and I decided to do the same. It is all retail stuff like pop and crisps. I’d lost my love for the game,” said 39-year-old Pagett.

“Snooker is always in your blood and you always come back to it eventually. I got back on the table and put the hours in. There is no point in going into snooker half hearted. If you are going to do anything then you need to be fully committed. If you have another job on the side, it is hard. My dad Andrew and mum Marilyn are now running the shop. They help out and I can overlook everything. Everyone is mixing in and allowing me to continue my snooker career. My fiancé Gemma, my parents and a couple of close friends around me have been amazing over the last year.

“Winning the European Championship took a massive weight off my shoulders. I didn’t have to go to Q School and I didn’t have to do the playoff. I could just let the others go and battle it out in the minefield. It was brilliant to win that, but unfortunately from there it all went downhill. Thankfully it is all good now.”

Pagett brings with him the experience of having played on the sport’s biggest stage before. He qualified for the Crucible at the 2011 World Championship and negotiated one of the most dramatic matches to be held at the qualifiers in recent memory. With the scores locked at 9-9 against Nigel Bond in the third round, Pagett required two snookers in the decider and got them to snatch a 10-9 victory on the final black. He went on to beat Andrew Higginson to qualify, before succumbing to a 10-7 loss to Jamie Cope at the Theatre of Dreams. He hopes experiences like that can stand him in good stead.

“That was an absolutely crazy match. I had already needed two snookers in a frame which I won earlier in the match and I needed two snookers in the decider. For some reason the lines seemed zoned in for me. I just found it so easy to get the snookers. I welded him to two snookers that he’d still be there now trying to get out of. Those type of moments are things that I can relate to and rely on if need be. I never remember a loss if I’m honest. Maybe I should. I always think of the positives and the wins. My glass is always half full.

“If I’d known the type of publicity you get just from playing at the Crucible, I’d probably have never qualified. It was just another tournament to me. I didn’t realise the history or significance of it. I don’t watch snooker, I’m not a fan of following it all. If I had the knowledge of what it was all about it certainly would have been harder. Now I know what I’m in for it will actually be harder to get through. It is a big deal. I hope I can get there again.”

Pagett’s return to professional action is set for just over a month’s time, when he faces Mark King, Ross Muir and Matthew Stevens in the BetVictor Championship League. He’s full of confidence for the upcoming campaign and says that, following his experiences over the last year, he is determined to make the most of it.

“I’m just going to enjoy it. I’m not going to let people tell me how to play the game. I will take my own shot selections on, as in the past people have questioned things. If I feel like going for a red and smashing into the 14 other reds, then I will do. I will see where it takes me. I know where my game is at. I’m a handful for anyone and I certainly don’t care who I play. I’m just happy to be there amongst all of the top players again. There are big rewards involved with the circuit and I am eager to find out where this second chapter of my career goes.

“I have bundles of experience. When they say Mark Selby is the greatest safety player in the world, I’d happily challenge that. I’m a great long potter as well. My game is as good as any of them you see. It is inconsistent, but none of those top 16 boys will want to play me. There is no doubt I will get bashed up a couple of times because I’ve been away from it. As soon as I get my nails into them, then I will be a handful.”