Long-serving referee Peter Williamson has retired from the World Snooker Tour after 30 years on the circuit.

The Liverpudlian first refereed on Merseyside in the late 1970s and moved into the professional game in 1991.

Williamson officiated several ranking event semi-finals as well as the final of a Players Tour Championship event in 2012 in which Rod Lawler beat Marco Fu 4-2 in Gloucester.

We spoke to him about his career highlights, favourite players and plans for retirement…

What lessons have you learned from your career that you will take into your retirement?

“Sometimes you cannot take people at face value, they can turn out totally different. It was a joy to meet people from all around the world, all different ages and different backgrounds.” 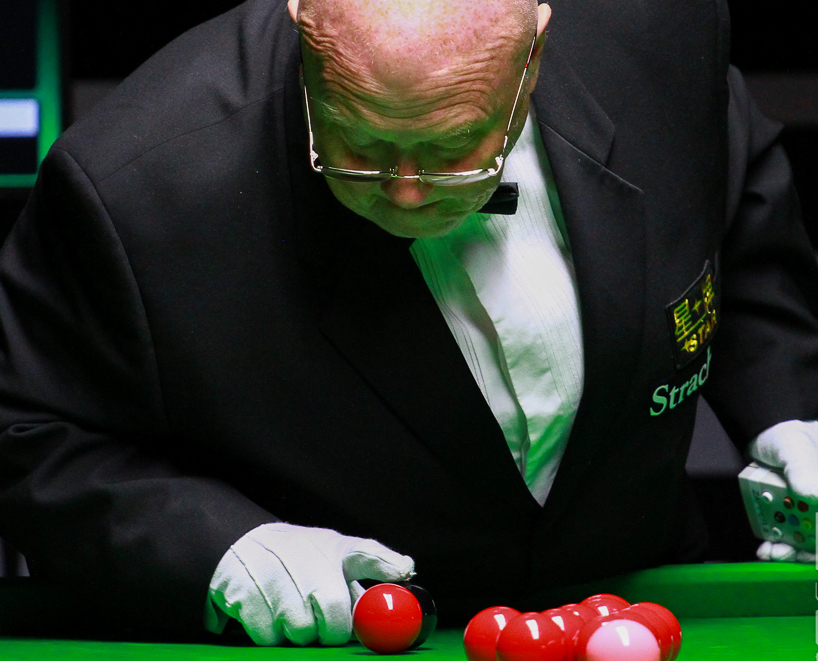 What were your favourite places to go on the tour?

“Well, obviously, the Crucible – and also Shanghai and York. Shanghai is a totally different environment and seeing the way the country was developing at the time, just when they were going to be getting the Olympics in China was brilliant. They were building a completely new rail system with 120 stations and building the whole thing at the same time simultaneously. The whole place was bright, multi-coloured and the electric bill for the city must have been tremendous!”

What was your favourite game to referee?

“I refereed Ronnie O’Sullivan against John Higgins in the 2009 Shanghai Masters semi-final, and O’Sullivan against Marco Fu in the same tournament. With Fu being from Hong Kong, they reckon the audience for that was in the tens of millions, if not 100 million. I don’t really feel pressure in games like those, you get used to it and I’d been refereeing professionally for about 15 years by then.”

What was your favourite moment of your career?

“Not long after I started, August 1991, I refereed at Trentham Gardens. In the qualifiers, I had the privilege of refereeing Fred Davis. It was a booth situation and most of the booths only had one or two people in, but mine was full and there wasn’t a seat to be had, because there was a party of pensioners in! They all wanted to see Fred play and when it got to the interval, he was 4-0 down and it was quite a distance to get to the refreshments area. He beckoned me over after his opponent, Jamie Woodman, had gone out and said: “You couldn’t do me a massive favour.” So I said: “Yes what’s that?” and he said: “My legs won’t get me to the refreshment area in time for the restart, is it at all possible you could organise a cup of tea for me?” So I got the balls set up and ran off to the tournament office and ordered the tray with a cup of tea for him that was delivered to the table. He lost the match 5-0 but that always stuck with me!”

Who was your favourite player to referee?

“I always had a lot of fun and banter with Ken Doherty, because of our football connections. I’m a Liverpool fan and he’s Manchester United, of course. Another player was John Higgins. I’ve refereed two 147s with Higgins, so I remember those well.”

What will you miss most about being on tour?

“Apart from watching the development of the game, seeing the way the game is spreading around the world, it’s probably the chance to meet up with colleagues from lots of different countries. It’s the only chance you get to meet up with workmates.”

What are your plans for retirement?

“I may still referee a bit of billiards. I’ve done five world billiards finals, and I got asked over the weekend if I was available to referee in Reading, but unfortunately I’m in Cyprus at the time. I’ll also be doing more gardening. I’ve just got a barbeque so I’ve been coming up with innovative menus for that, like chocolate bananas.”

Finally, what is your message to players on the tour right now?

“Keep at it, even if you are having a bad day. Practice makes perfect so stick with it.  Also – I’d just like to thank all my colleagues for making the second part of my working life my most memorable.”