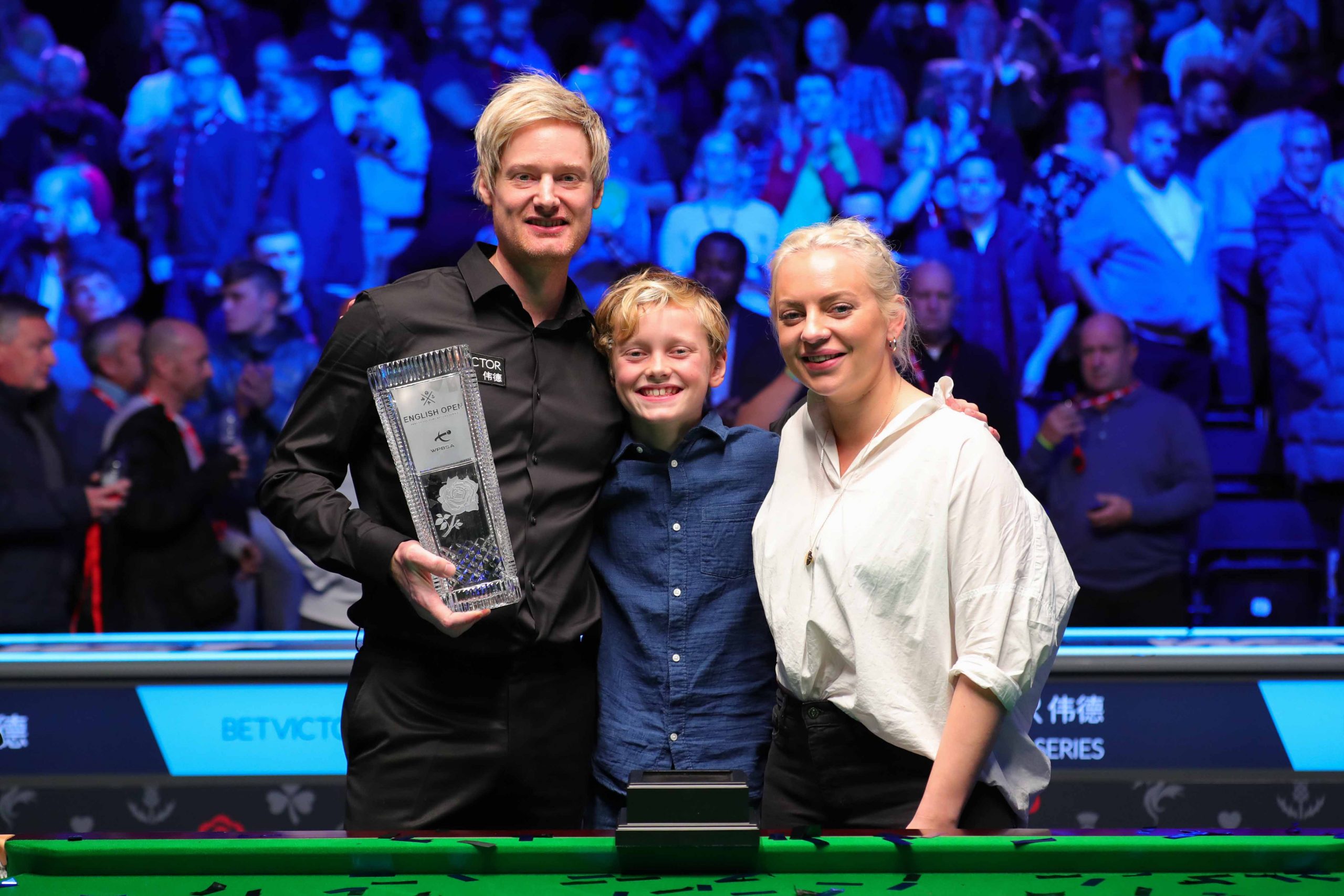 Neil Robertson battled from 8-6 down to beat John Higgins 9-8 in a thrilling BetVictor English Open final in Milton Keynes.

Victory for 2010 World Champion Robertson sees him capture a 21st career ranking title, moving him ahead of Mark Selby (20) and just one behind Judd Trump (22). He’s now seventh in the all-time list.

Robertson picks up a top prize of £70,000 and the Steve Davis Trophy for tonight’s victory. Having previously won Home Nations titles at the Scottish Open in 2017 and Welsh Open in 2019, he now only needs to win the Northern Ireland Open to complete a series clean sweep.

This evening’s deciding frame win will come as a relief for Robertson, who suffered heartbreak in this event 12 months ago at the hands of Judd Trump. On that occasion the Australian was on the wrong side of a 9-8 scoreline.

Defeat for 31-time ranking event winner Higgins means he has now lost six of his last seven major finals. This loss will be especially difficult to take given he also lost the recent BetVictor Northern Ireland Open final to Mark Allen 9-8, having led 8-6 on that occasion as well.

Robertson’s victory sees him move level with Higgins in the head-to-head at 8-8. This was only the second time that the pair have met in a ranking final. The first came at the 2013 Wuxi Classic, when Robertson defeated Higgins 10-7 in the title match.

It was Robertson who seized the initiative in the afternoon session, emerging with a deserved 5-3 advantage. However, Scotland’s Higgins came out firing when play resumed this evening.

The four-time World Champion rallied to take the first three of the session and lead for the first time in the match at 6-5. High drama followed in the 12th frame.

Robertson missed the final green after what appeared to be a kick. Higgins then spurned a chance on the following shot, leaving the green over the pocket and Robertson snookered behind the brown. He did hit it but somehow the green didn’t drop and Higgins cleared to move 7-5 ahead at the mid-session.

When play resumed Robertson closed within a frame thanks to a break of 80, before Higgins claimed the 14th to leave himself two up with three to play at 8-6. Robertson reduced the deficit by winning the 15th and then ensured a decider with a sublime break of 128. 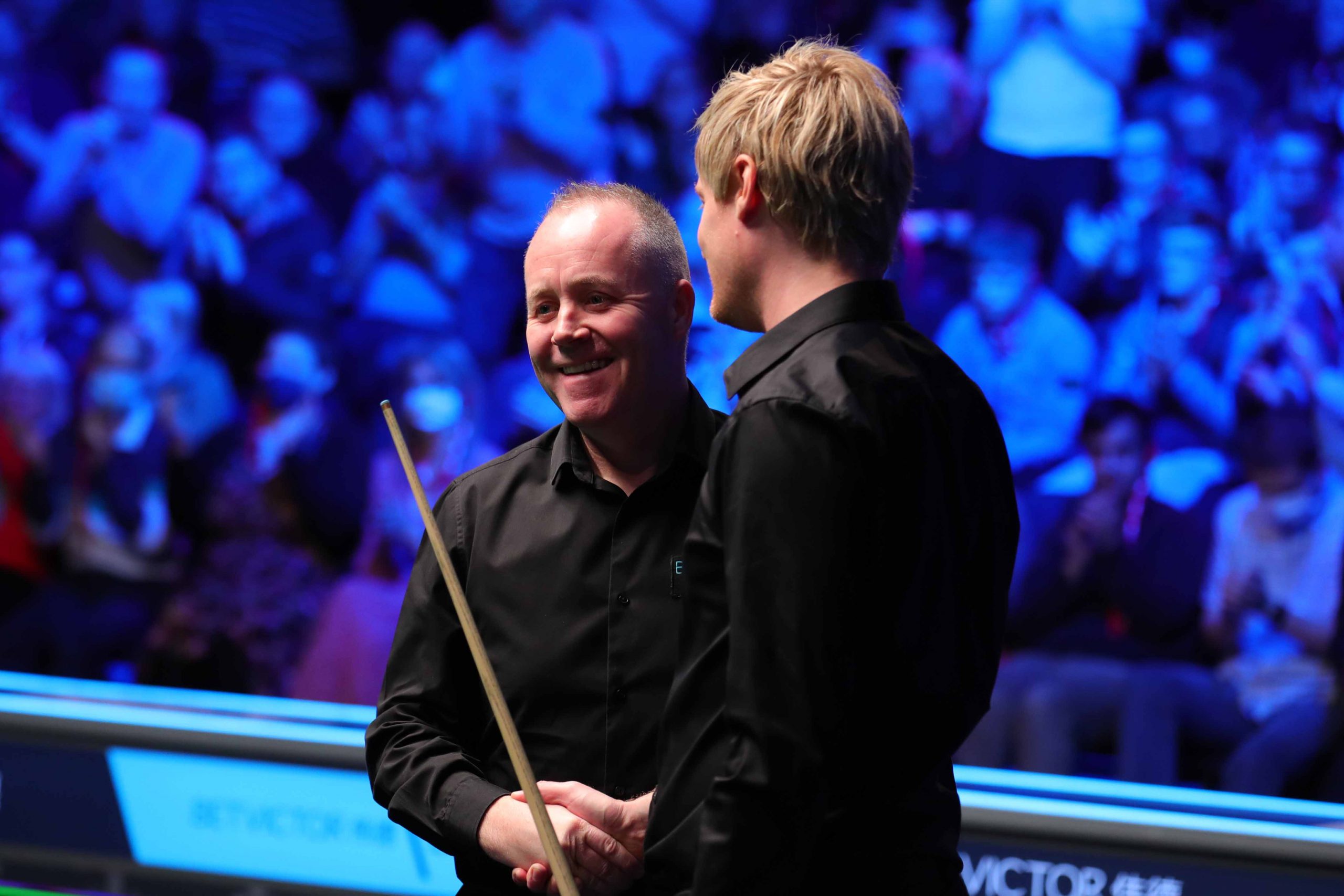 Robertson had the first opportunity, but a pack split off the green left him on nothing. Higgins then had a chance of his own and missed a difficult red to the top right corner after falling out of position. He left Robertson a long range cut to the same pocket, which he duly deposited and made 65 from to emerge a 9-8 victor.

“He was someone that, as a kid, I absolutely idolised. I always dreamed of just meeting him, but to be sharing a table with him in a final is incredible,” said 39-year-old Robertson.

“I said earlier this week that I’d won the Welsh and Scottish Opens. To win the English Open and the Steve Davis Trophy leaves just one more with the Northern Ireland Open. I’ll have to focus on that one next year and win the whole set

“I watched the decider a few weeks ago at the Northern Ireland Open. On one side I was really pleased for Mark Allen to win in his home city, but also I really felt for John as I love seeing the great champions win. That is just the way it goes, he has made so many opponents absolutely devastated in his career as well.

“There will have been a lot of people in that crowd tonight that will have had it really tough over the last 18 months or so. I was so happy to see so many people cheering and really enjoying themselves. That is the real thing to take away from this. Sport is back.”

Higgins said: “This afternoon I was a little bit tired, but Neil made me tired. It was like Mowgli in the Jungle Book when the snake put him to sleep. He is such an unbelievable player and cueist. I was nearly falling asleep the way he was just continually hitting the ball and banging the back of the pockets.

“It was great to share a final with him, as he is one of the best ever. It was a great final to be involved in, I came out the loser again but every credit to him. He was fantastic.”