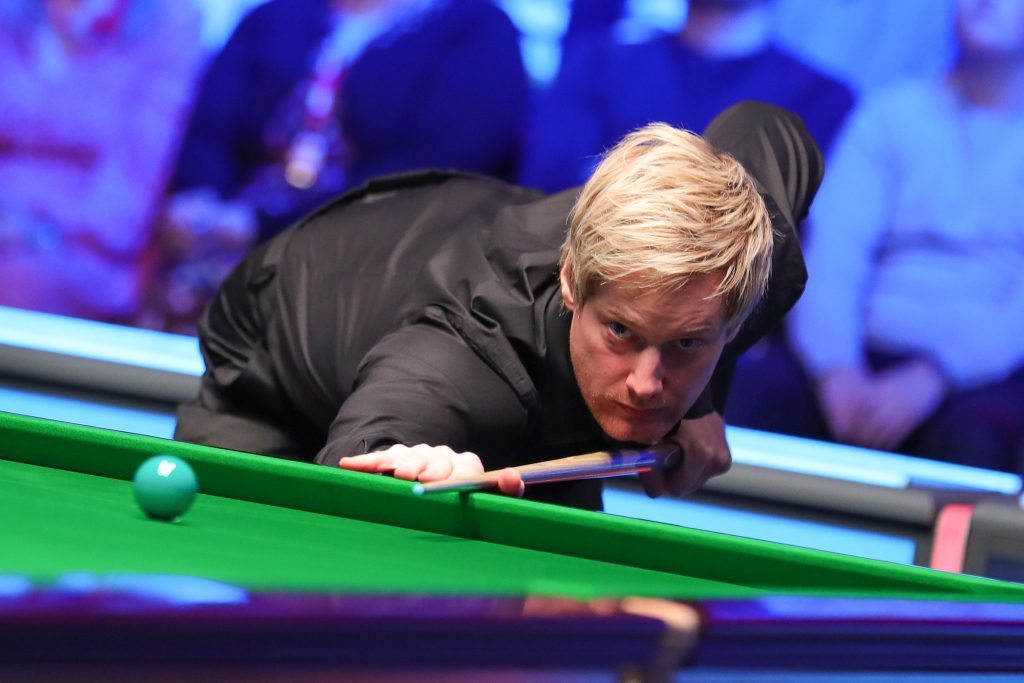 Neil Robertson came within a few pots of becoming the first player to make five consecutive century breaks in a professional match during his 5-0 win over Alife Burden in the second round of the BetVictor European Masters.

Robertson took a 4-0 lead with breaks of 105, 101, 107 and 116. In frame five he was among the balls and on course for a historic fifth ton, but ran out of position with two reds remaining. On 76, he felt he could keep the break going by potting the black, which was close to the two reds, but the cue ball grazed a red and the chance was gone.

Burden would have suffered the ignominy of failing to score a point in the match had he not gained seven for that foul from his opponent.

Australia’s Robertson becomes the first player to score four consecutive centuries in a match on more than one occasion, having done so previously at a PTC event in 2013 when he beat Ahmed Saif 4-0 without conceding a point. The only other six players to make four tons in a row are John Higgins, Gary Wilson, Mark Allen, Shaun Murphy, Stephen Maguire and Lu Ning.

World number four Robertson scored 522 points without reply, not far off the record of 556 set by Ronnie O’Sullivan against Ricky Walden at the 2014 Masters.

“I had the balls at my mercy for five in a row,” said Robertson, who has already won three titles this season. “I potted some really good balls when I had it all to do. Then in the end it was probably a bit too easy, I over-ran a positional shot on the pink, if I had finished straight on the pink I would have potted the last few balls easily. It would have nice to do, but four centuries in a row will have to do.

“It would have been a nice record to have. I’m disappointed not to convert that very rare opportunity. It’s like a golfer missing a chance to shoot 59. You need everything to go right, and to get good splits on the reds. My positional play was fantastic but you still need luck when you go into the pack. I felt for Alife because he didn’t do anything wrong!”

Robertson, who now meets Pang Junxu in the last 32 on Thursday morning in Milton Keynes, was tipped earlier this week by Ronnie O’Sullivan as the man to beat at the World Championship which starts in April: He added: “Ronnie puts out his favourites a couple of months before the World, he seems to do it every year to try and put us under the pump! He seems to be genuine in what he says about me, there is a mutual respect there. I am used to being one of the favourites for a tournament, all I’m trying to do is play attacking snooker and make big breaks.”

Mitchell Mann top scored with 90 in a 5-0 win over Thepchaiya Un-Nooh while Anthony McGill fired runs of 134 and 124 as he beat Hossein Vafaei 5-0. Shaun Murphy suffered a 5-3 reverse against Thailand’s Noppon Saengkham.