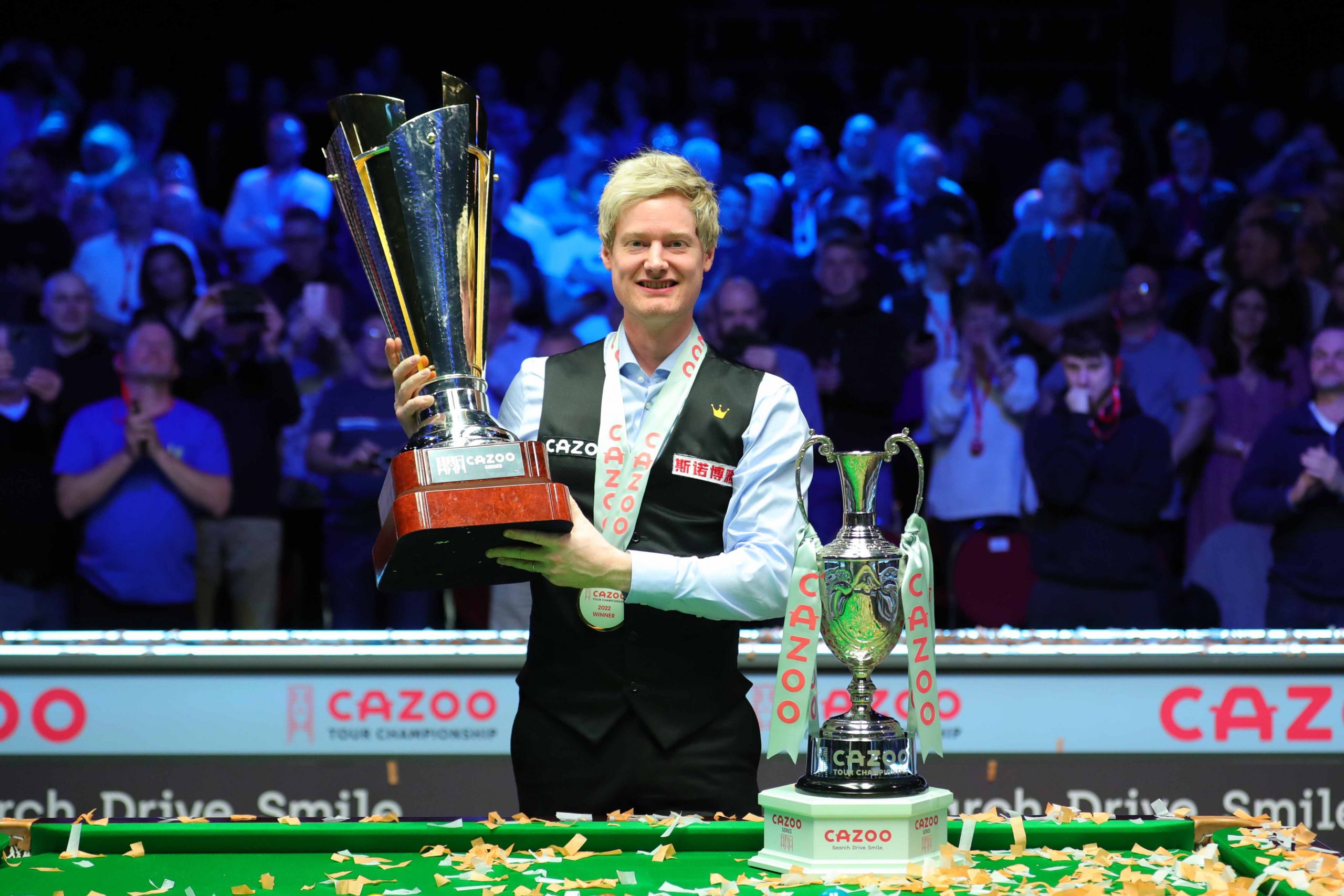 Robertson with the Cazoo Series and Cazoo Tour Championship trophies.

Neil Robertson defended his Cazoo Tour Championship title with a sensational fightback defeat of John Higgins, coming from 9-4 down to win 10-9 in Llandudno.

It’s the second time this season that Robertson has inflicted a gut-wrenching loss on Higgins. The Australian trailed 8-6 in the English Open final back in November and rallied to secure a thrilling 9-8 win.

Victory for 2010 World Champion Robertson enhances an already golden season. He landed Triple Crown glory at the Cazoo Masters in January, where he defeated Barry Hawkins in the title match at Alexandra Palace.

Robertson’s other successes have seen him comprehensively win the Cazoo Series. He was runner-up to Ronnie O’Sullivan at the Cazoo World Grand Prix before Christmas. The Melbourne cueman then lifted the the Cazoo Players Championship trophy last month, by again beating Hawkins in the final. 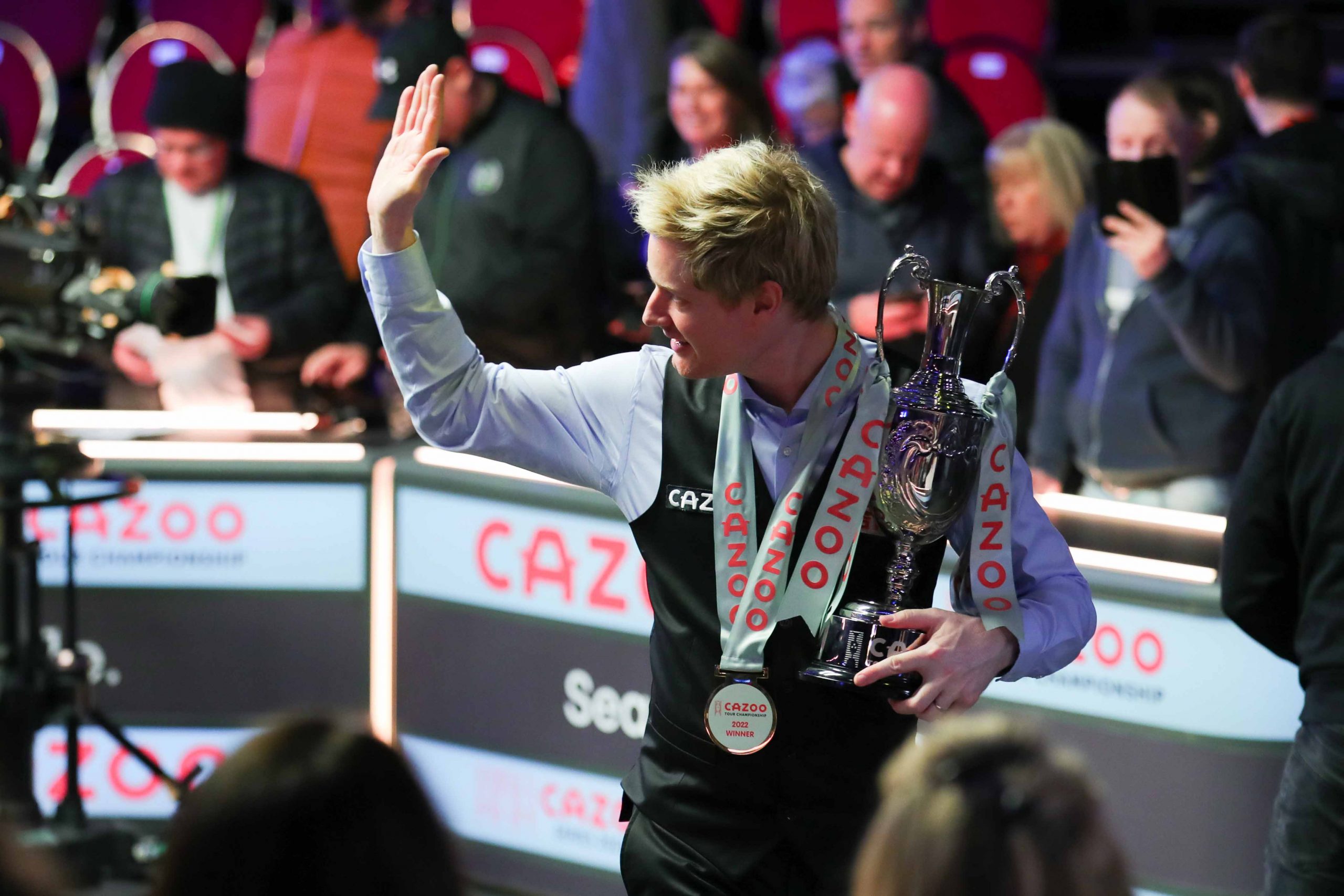 Tonight’s victory caps off a successful title defence for Robertson, who defeated Ronnie O’Sullivan 10-4 in last year’s final. He picks up the £150,000 top prize and secures the 23rd ranking title of his career. That draws him level with Judd Trump in sixth position on the all-time winner’s list.

Defeat will be a bitter pill to swallow for 46-year-old Higgins, who leaves Llandudno with the £60,000 runner-up prize. The four-time Crucible king has now lost five major finals this season. In addition to the English Open final defeat, he was also on the wrong side of a 9-8 loss from 8-6 ahead at the Northern Ireland Open against Mark Allen. The Scot lost out in further finals at the Champion of Champions and Scottish Open.

It was 31-time ranking event winner Higgins who emerged from a pulsating afternoon session with a 5-3 advantage and he pressed towards the finish line from the off this evening.

Higgins claimed a tightly contested opening frame on the colours, before crafting a run of 68 to move four ahead. He then won the 11th frame to make it 8-3. Robertson was left clinging on by his fingernails, but a gutsy 91 break ensured he headed into the mid-session with an 8-4 deficit.

When play resumed Higgins fired in a break of 84 to move just one from the title at 9-4. He had the first chance in the 14th frame, but broke down on 24. Robertson stepped up and a contribution of 54 helped him to reduce his arrears.

The Thunder from Down Under then struck with a superb century run of 106 to crank up the heat at 9-6. Both players had chances in a tense 16th, which went the way of Robertson. He followed that up by showing his class with breaks of 72 and 93 in consecutive frames to force an unlikely decider.

Robertson took on a risky plant early on in the frame and left Higgins a chance with the balls in favourable positions. However, he spurned a red to the top right corner. It proved to be his final opportunity and Robertson stepped up with a ruthless run of 72 to cap off a momentous turnaround and win 10-9. 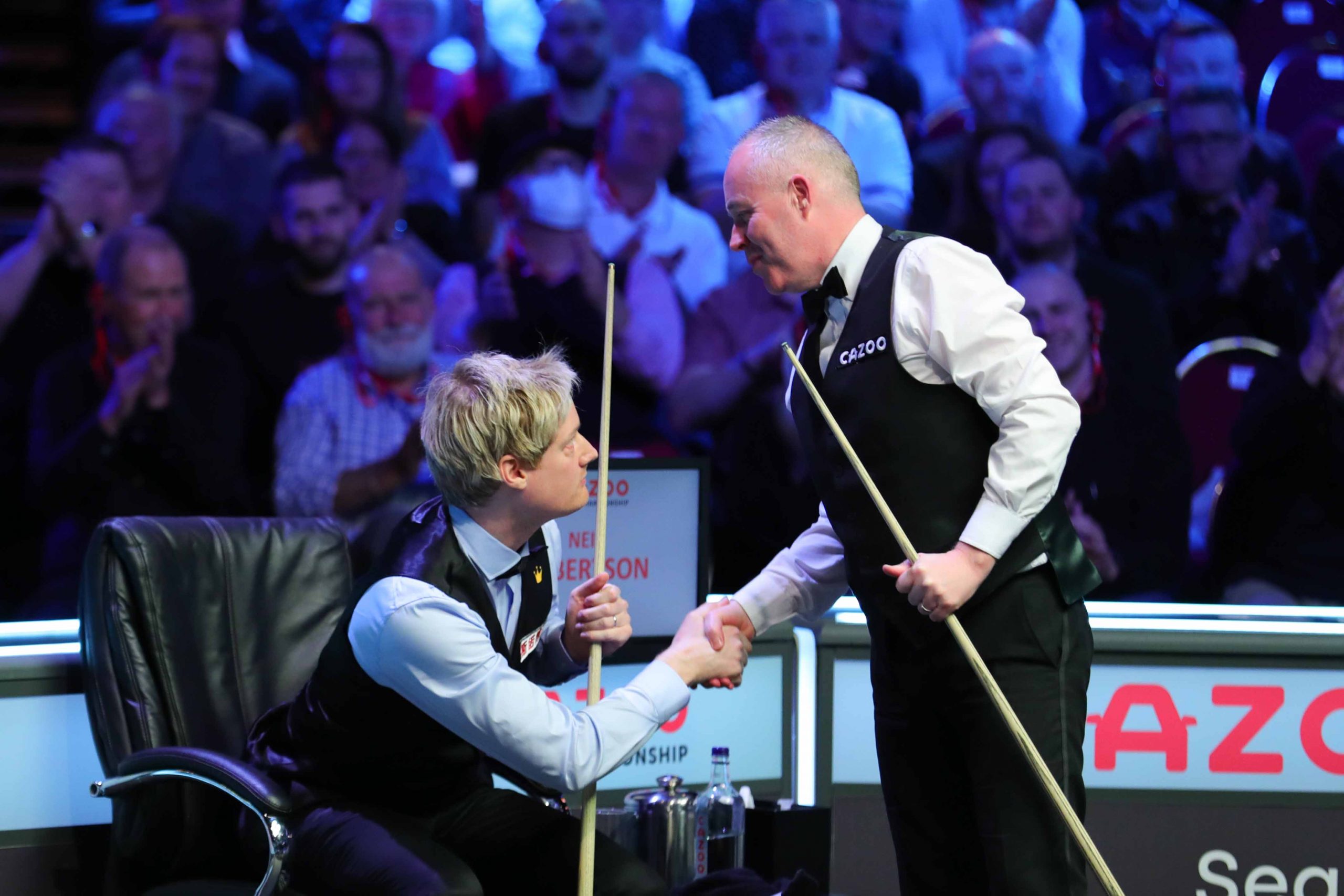 “I always believe that I can come back from any position. The way I play the game means that if I can get the momentum then I can go on a winning streak in a number of frames,” said 40-year-old Robertson.

“I wasn’t allowing the match to get bogged down. John was just dictating the position of the balls. I didn’t have too many answers. When he went 9-4 up he was at his best, it was incredible to experience playing against him. When you aren’t making too many mistakes it is easier to get back into a match. I wasn’t kicking myself over anything, because John was just playing too well.

“He was really unlucky at certain times, but that is what you need to be able to come back in a match. I feel for him big time. He is such a fantastic person and a wonderful player. He will use that for motivation at the World Championship as he always does.

“It is like I’ve had three finals this week against brilliant players. Hopefully that will hold me in good stead. I can have a few days off now, chill and relax. Then I will get back into preparations for the worlds.”

Higgins said: “Every credit to Neil, he came back and put me under unbelievable pressure. I just didn’t stand up to it at the end. It is unforgivable, you cannot miss that red when you have the chance to get a few points on the board. He played amazing stuff to come back at me.”