Yesterday marked the 25th anniversary of one of the most memorable snooker moments of all-time, as we are now quarter of a century removed from Ronnie O'Sullivan's miraculous 147 break at the World Championship in 1997.

Even after all this time has passed, it is still incredible to watch. 'The Rocket' would clear the table at a ferocious pace, taking only five minutes and 20 seconds to clear the table. For those keeping track, that is a gap of 8.5 seconds per shot. He would also take home a special prize of £147,000 for his efforts.

For those of you that need a reminder, here is a young O'Sullivan in full flow.

It's 25 years to the day since Ronnie O'Sullivan produced the most scintillating five minutes of snooker the world has ever seen 🤤pic.twitter.com/hCNEgg4qhd

Of course, he would love to recreate this moment at this year's World Championship, with the Englishman on a quest to win a record equalling seventh title in the days ahead.

However, he doesn't think a break of this speed is possible in the modern game.

Looking back at this break with Eurosport, he said that the way the game is refereed at the moment means it's just not possible to clear the table at such a pace. He also summed up what was going through his mind at the time, admitting he didn't initially realise that the maximum break could be on.

Today, I would be thinking it was a good chance for a maxi, but then I think I was just on auto-pilot and looking to win the frame.

I would never do some of this now. I would never leave my white in that position - the white is a bit loose. I'm a different break-builder now to what I was then, but nevertheless, I still got the maxi...

It probably couldn't be done today because the refs do a bit too much walking maybe. What a referee [Len Ganley] - the referees today could learn a thing or two. He just stayed in the same position. It's like a good footballer, he doesn't move around too much. He knows what he is doing and gets the job done.

That [the speed, 8.5 seconds-a-shot] was ridiculous, really. If I am on 16 seconds-a-shot now I am thinking that is as quick as I would want to be. I don't want to be any quicker than that...

I was petrified and I was in bits! But once I got on the blue I was thinking 'this is it, this is actually on now' and the chalk goes under the table. I thought I had no time to collect that because if I get the chalk I would probably miss.

The method in the madness was to go as fast as I could and override the thoughts in the brain - and hence why it was such a fast break.

There is probably nobody in the modern game that would even be able to replicate the speed of the above clip. As O'Sullivan admits, even he wouldn't be able to do it considering how he has altered his game over the last couple of decades.

Judd Trump was also asked if he felt this break could be done in the modern game, but he agreed with the argument that it just wouldn't be possible due to the officiating in the sport.

To be honest, I don't think the refs move quick enough now, honestly.

I don't think they do. Back in the day, the player had the upper hand. They could kind of barge them, like 'you go and pick that ball up' but now they just take their time.

He has just got to the point where he has to accept it. He would like to play a lot quicker, and back in the day, he could do that.

Nowadays, the refs just sort of like to take their time to spot the ball and everything like that and get out of the way.

While it is highly unlikely that we will witness a 147 break of this ferocity, there is no doubt that we should see some excellent snooker played at The Crucible in the days ahead. 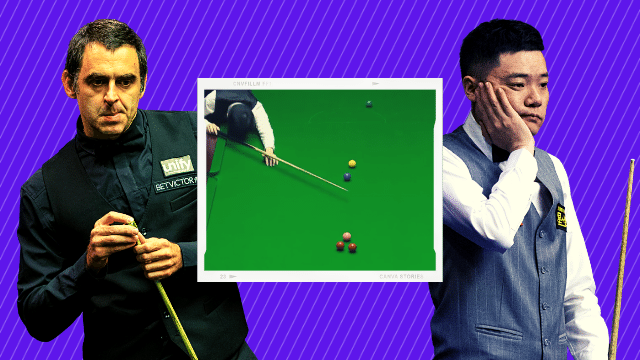