It wouldn’t be a snooker World Championship Final with Ronnie O’Sullivan if there was not controversy and brilliant cuemanship served up in equal measure.

Leading 5-3 heading tonight’s evening session against Judd Trump, O’Sullivan produced masterful snooker at the Crucible, while also having a couple of run-ins with the referee.

O’Sullivan initially had a disagreement with referee Oliver Marteel over the placement of the cue ball after a miss, which prompted Ronnie to jokingly offer Marteel to have a go at the shot.

The proceedings then became increasingly heated after Marteel had words with O’Sullivan after he believed the snooker star had made an apparent lewd gesture.

O’Sullivan was adamant that nothing had occurred and said to Marteel, “don’t start”, perhaps in reference to a similar altercation the pair had in the 2015 World Championship, when Marteel also questioned O’Sullivan for what he felt was a rude gesture.

Judd Trump suggests the warning could have been issued after the frame 🗣#ilovesnooker pic.twitter.com/2jRZxG6bBi

Speaking after the session, O’Sullivan gave his view on what happened.

He just seems to be looking for trouble, you know, I just get a vibe from the guy. You can check the hundreds of cameras out there. They can check them all, slow motion them down.

“I’m not having it because I just think he’s trying to create something. I don’t know, he needs to deal with it not me.

🗣 ”He just seems to be looking for trouble, I get that vibe from the guy.” 😤

🚀 Ronnie O'Sullivan was not pleased with referee Olivier Marteel

The altercation was a slight shame however, as it took the limelight off some sensational snooker from arguably the greatest player of all time.

Ever the showman! 🧙‍♂️

Going into tonight’s evening session, both players will be fairly pleased, with O’Sullivan taking a two frame lead, and Trump managing to limit the damage having been down 5-1 before taking the final two frames of the session.

See Also: Ronnie O'Sullivan 'Genius' Clearance Today Shows Why He Is The Greatest Of All Time 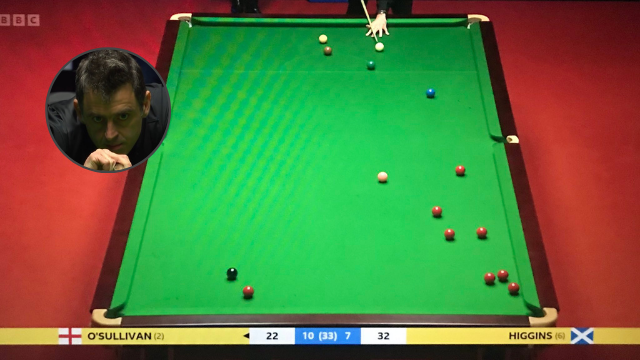