Ronnie O'Sullivan captured a record-equalling seventh world title on Monday evening, and while his performance against Judd Trump was a brilliant one, he did not have it all his own way over the course of the final.

Not only did he have to deal with a strong comeback from his opponent, but 'The Rocket' also had a run-in with the referee at one point.

It came during the eighth frame of the match, with Olivier Marteel warning O'Sullivan after he felt he had seen the player make a lewd gesture after a wayward shot. The 46-year old did not take the accusation well.

Judd Trump suggests the warning could have been issued after the frame 🗣#ilovesnooker pic.twitter.com/2jRZxG6bBi

Tell me, tell me, what did you see? You tell me what you saw. You saw nothing. Go look at the camera.

You saw nothing. Don't start.

Trump would go on to win that final frame of the session, although O'Sullivan's play later in the evening all but the trophy beyond the reach of his opponent.

Such an incident could well have derailed him in the past, although he worked on controlling his emotions over the last decade or so. A large part of that came with the help of sports psychiatrist Dr Steve Peters, someone O'Sullivan has credited with all but saving his career.

Speaking to the BBC, Peters said that Ronnie O'Sullivan later being proven correct in regards to this incident helped him move on and concentrate on the task ahead. He also revealed that the pair had prepared for scenarios such as this one in the past.

We did discuss it.

It was quite helpful that somebody came into the dressing room and said they had checked the cameras and there wasn't anything, which is what Ronnie said and that there was nothing done.

If they hadn't, this is something that happens to all of us in life and it usually rattles our cages very badly because nobody likes to feel like they're on the receiving end of an injustice. It's something you've got to deal with, if you're in the middle of a sports battle you've got to put it to one side...

Incidents happen all the time in sport where there are confrontations or disagreements, particularly with referees or other players. I like to get people and ask 'what is your plan when something like this happens'. It inevitably is going to happen, so we have a programmed response.

That way, we are not acting in the moment. That can sabotage your sport, your concentration and focus.

Having long been regarded as the best player of all-time, O'Sullivan now has the statistical case to back up that argument. He has the joint-most world titles in the history of the sport, as well as the most triple crown titles of any player.

That may not have been possible without the help of Peters.

Speaking after Monday's final, O'Sullivan credited him with saving his career when they first started to work together a decade ago.

If it hadn’t have been for Steve Peters I would probably be in some hot country like Portugal living in a nice beach house and coming to the UK once every six weeks to see my family.

I had the talent, I had the game… If I was on it was great, but if I was off I was looking for the exit doors, thinking ‘It’s time to go home’, because I didn’t enjoy digging it out.

But I’ve learned that nobody can be perfect all the time, so just accept it, get on with it, make best with what you’ve got and you just don’t know what’s round the corner.

It's unlikely that O'Sullivan will stop here. Despite approaching his late 40s, very few would back against him winning an eighth world title over the next couple of years. 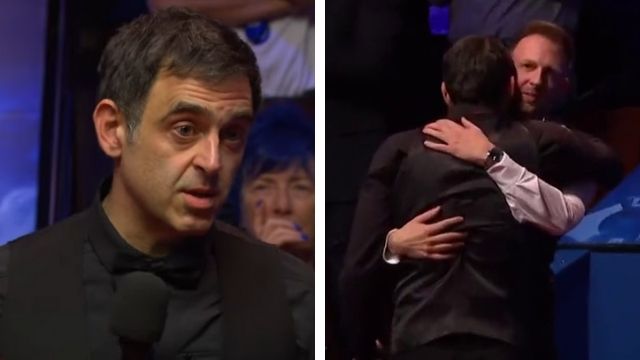