Ding Junhui's quest for a World Championship title will stretch for at least another year, losing to Kyren Wilson in their first-round clash at this year's event.

The 35-year old is a three-time semi-finalist in this tournament, although he has now failed to go beyond the second round in each of the last four editions.

Some of the frustration over that run boiled over last night during this match, with Ding hitting his head off the table after missing a shot on the red in the tenth frame.

He would go on to lose the contest 10-8 as Wilson advanced.

Ding is seen as one of the more measured characters in snooker, although Ronnie O'Sullivan said that public persona can be a bit misleading.

'The Rocket' is good friends with the Chinese star, and speaking on Eurosport, he revealed that Ding is actually quite an emotional person despite what you often see on camera.

"He's quite an emotional guy sometimes." 💬🤬@iamradzi and Ronnie O'Sullivan reflect on a painful-looking moment for Ding Junhui during frame 🔟 at the Crucible.@ronnieo147 | @WeAreWST pic.twitter.com/SmljxCOo7c

He is quite an emotional guy, Ding.

Sometimes he can get a bit angry. He is not the quiet, meek guy that you think of him. If he feels a bit hard done by about something he will say what he has got to say, you know.

There is a different animal behind there. When you get to know Ding, he is quite a serious character as well.

He is quite a businessman, you know. He is not a silly guy.

Now in his mid 30s and with results steadily diminishing in the World Championships, Ding must be concerned that his opportunity to lift this trophy has now passed hum by.

He will certainly not give up the fight to do so, although he could yet go down as one of the best players never to win a world title over the course of their career. 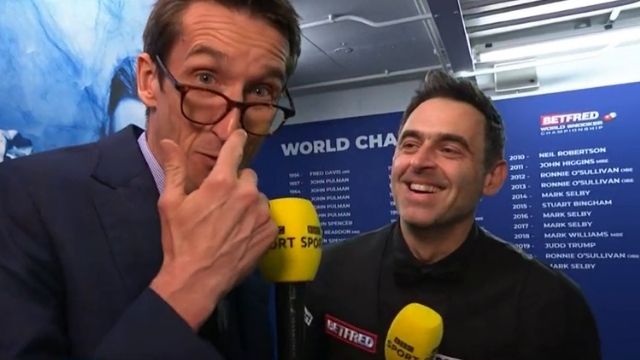