Selby And Kenna In Pole Position

Mark Selby and Rebecca Kenna beat Judd Trump and Ng On Yee 3-1 to top the group after the first day of the new BetVictor World Mixed Doubles in Milton Keynes.

Tickets still available for the final day on Sunday

Points gained after two matches each:

The top two teams after the third round of group matches on Sunday afternoon will go through to the final on Sunday evening.

Sunday’s play starts at 1pm with Neil Robertson and Mink Nutcharut against Judd Trump and Ng On Yee, followed by Ronnie O’Sullivan and Reanne Evans against Mark Selby and Rebecca Kenna.

English duo Selby and Kenna beat Robertson and Nutcharut 3-1 in the opening match during the afternoon session and scored another success by the same scoreline this evening against Trump and On Yee. They took the opening frame on the colours, then lost a 59-minute second frame which was resolved when Trump potted the final black.

Selby’s break of 68 gave his team a 2-1 lead and he made a 55 to take control of frame four. On Yee had a chance to clear but missed the penultimate red when trailing 59-47 and that proved the key moment. 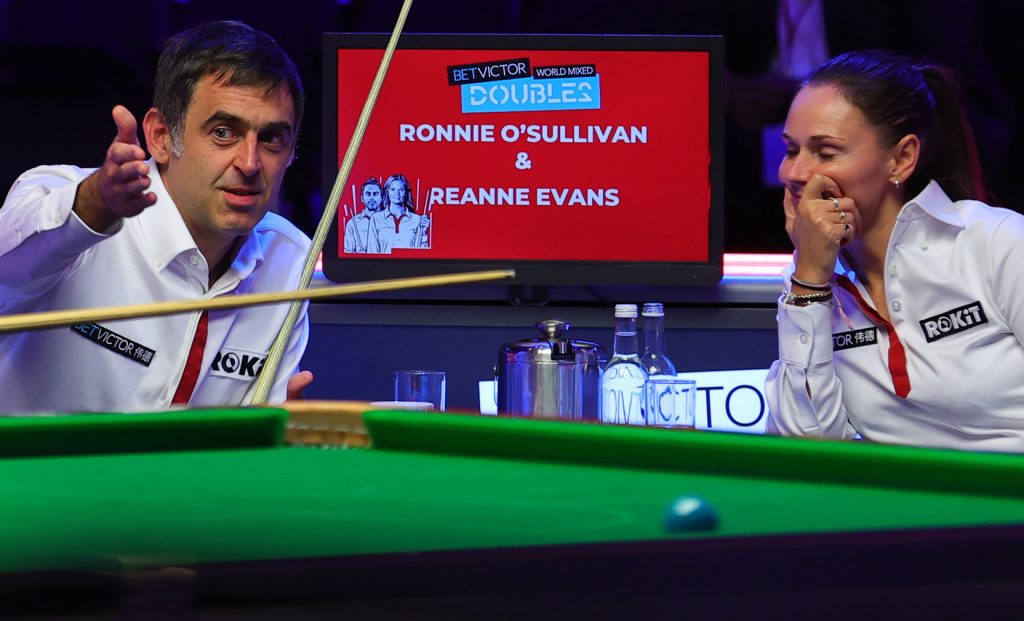 O’Sullivan and Evans have enjoyed their time in the arena

After losing their opening match on Saturday afternoon, O’Sullivan and Evans bounced back in the evening session with a 3-1 success against Robertson and Nutcharut. They lost a 55-minute opening frame on the colours, then breaks of 111 and 68 from O’Sullivan put them 2-1 up and they secured victory in the fourth.

O’Sullivan said: “It has been good fun. You have to keep your concentration and try to support your partner, there’s a lot going on we are not used to. I don’t know whether to be quiet or whether I’m talking too much! We are feeding off each other. I am trying to get into the zone but also trying to do what feels right.”

Evans added: “You have to try and go out and enjoy it, and try to play to your own ability. Who wouldn’t want to be paired with Ronnie!”