Aspiring snooker players have a string of options as they look to improve their game, including employing the help of a familiar face from their television screens.

Snooker is one of few major sports in which anyone could walk off the street and enjoy lessons from players they have watched in the biggest tournaments in the game – even current ranking title holders.

It’s a very decent perk for snooker fans who fancy themselves a bit of a player, or even ones that know they are not up to much but want to be able to beat their pals down the club.

The latter is very much the category that this writer fits into as he went to seek the help of Michael Holt in order to turn his pitiful breaks at least into double figures.

A ranking event winner who first turned pro in 1996, has been to the Crucible no fewer than eight times and been to as high as 20 in the world rankings, the Hitman is well placed to impart some knowledge on how to wield a snooker cue.

While Holt has beaten Ronnie O’Sullivan four times in professional competition, there was no mockery as his new student missed the simplest of pots, only encouragement and help to fix the basic problems in technique.

Going in at the lowest of levels there are obvious problems that experienced eyes can fix, but even for regular players and top amateurs there are tweaks, pieces of advice and a wealth of experience to be tapped into.

The most powerful of snooker sorcerers could not turn this student into a force to be reckoned with, but within minutes I was feeling more confident on shots, understanding the mechanics of the game better and felt armed with a few simple things to keep in mind for future.

The wisdom of the Hitman is imparted from his private room in Nottingham, while he also offers online lessons over Zoom which are taken up by students across the globe. He also gives advice free of charge on his increasingly popular YouTube channel.

While online snooker coaching may sound a step down from in-person, Holt has had a lot of great feedback for his work over Zoom, with the following letter a good example of how much amateur players get out of the sessions and how much they love the experience of working with a player they have watched for years…

If you are not near Nottingham, or au fait with Zoom, there are plenty of other options for in-person advice from players you may recognise across the country.

Reigning Welsh Open champion, and former Masters finalist, Joe Perry is still going strong on tour but is also offering coaching for all levels of player from his base in Cambridgeshire.

The Gentleman has been working with the Cuestars programme and coaching youngsters after taking up a role as an ambassador for the grass-roots snooker initiative.

Anyone can get in touch with Joe and tap into his wisdom, though, despite the Gent still competing with the world’s best and commentating on the biggest events on the BBC.

Current World Seniors champion Lee Walker, who works with Mark Williams and coaches one of the brightest talents in the game Liam Davies, is available for sessions in Newport.

Up in Scotland, former Grand Prix champion and world number 12 Chris Small provides coaching for any standard of player from his base in Edinburgh.

Small works with Ross Muir and has coached Stephen Maguire in the past, becoming a top coach after being forced to retire early from his playing career due to a back issue.

In London, former Shoot Out champion Michael Georgiou has been coaching for around 10 years. He is also available to travel around the country, and even the globe to pass on his knowledge, currently on a stint in Istanbul teaching local players.

The amount of traveling coaches do shows how in-demand their skills are, with Holt having made a trip to Turin in recent months, while another former Shoot Out champion Nigel Bond has been out to coach in Romania and Kuwait.

Bond, who dropped off tour this year after an epic stint as a pro which began in 1989, is based at a club in Chesterfield where he offers lessons to all levels of player.

00-147 also offers a Snooker Experience day with fellow coach Andrew Highfield, in which players get group and one-to-one coaching and then play a mini-tournament with Nigel and Andrew.

A unique place to go and receive coaching is RAF Waddington in Lincolnshire, where Steven Hallworth is based with his own room on the base.

The 26-year-old enjoyed an impressive run to the last 16 of the British Open this season and has been busy with coaching requests in Lincolnshire and traveling further afield, including in Sheffield at the WST Cue Zone during the World Championships.

At the magnificent Northern Snooker Centre in Leeds there is a choice on offer for snooker students with current professionals Peter Lines and Sanderson Lam both giving lessons, as is former-pro Ian Williamson.

One-to-one sessions are available at the club, as are group sessions which are on offer Monday to Friday for all ages for just £5, with a junior session on Saturday mornings.

Some coaches are also offering gift vouchers for sessions so they can be given as presents. Get in contact with any of the players-turned coaches mentioned with the details below…

Snooker coaching from professionals and ex-pros across the UK 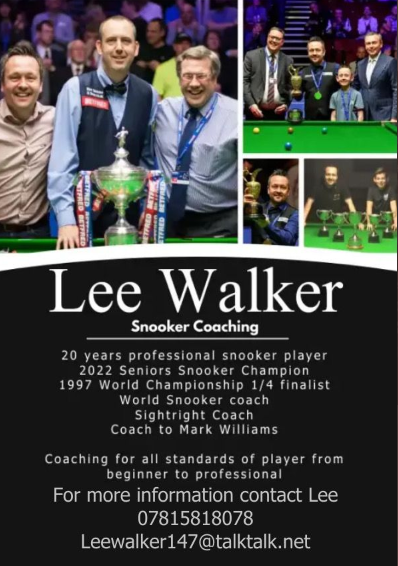 There is a full list of WPBSA qualified coaches here.