Alexandra Palace, home of the Masters

Behind closed doors sport continues to provide entertainment to millions of people at home, as difficult times rumble on amid the coronavirus pandemic. However, the lack of fans has delivered a reminder across the sporting spectrum of what crowds bring to the spectacle.

Sports enthusiasts are adjusting to viewing elite competition on television, without fans to create the tense, raucous and gladiatorial setting only a packed house can. The big moments in sporting contests are synonymous with deafening noise, pin drop silence and electrifying atmospheres. These have been replaced, in many instances, with canned applause and empty backdrops.

Snooker as a sport has worked hard to keep the show on the road, with limited fans in attendance for the opening day of the Betfred World Championship and for the final. There have been events running since June, giving players the opportunity to earn a living and viewers at home a chance to see their heroes in action.

Like in any other sport, snooker crowds are composed of a cross section of fans, scaling from first time visitors to hard core followers. To celebrate our sport’s loyal fanbase, we have spoken to some of snooker’s most dedicated fans. 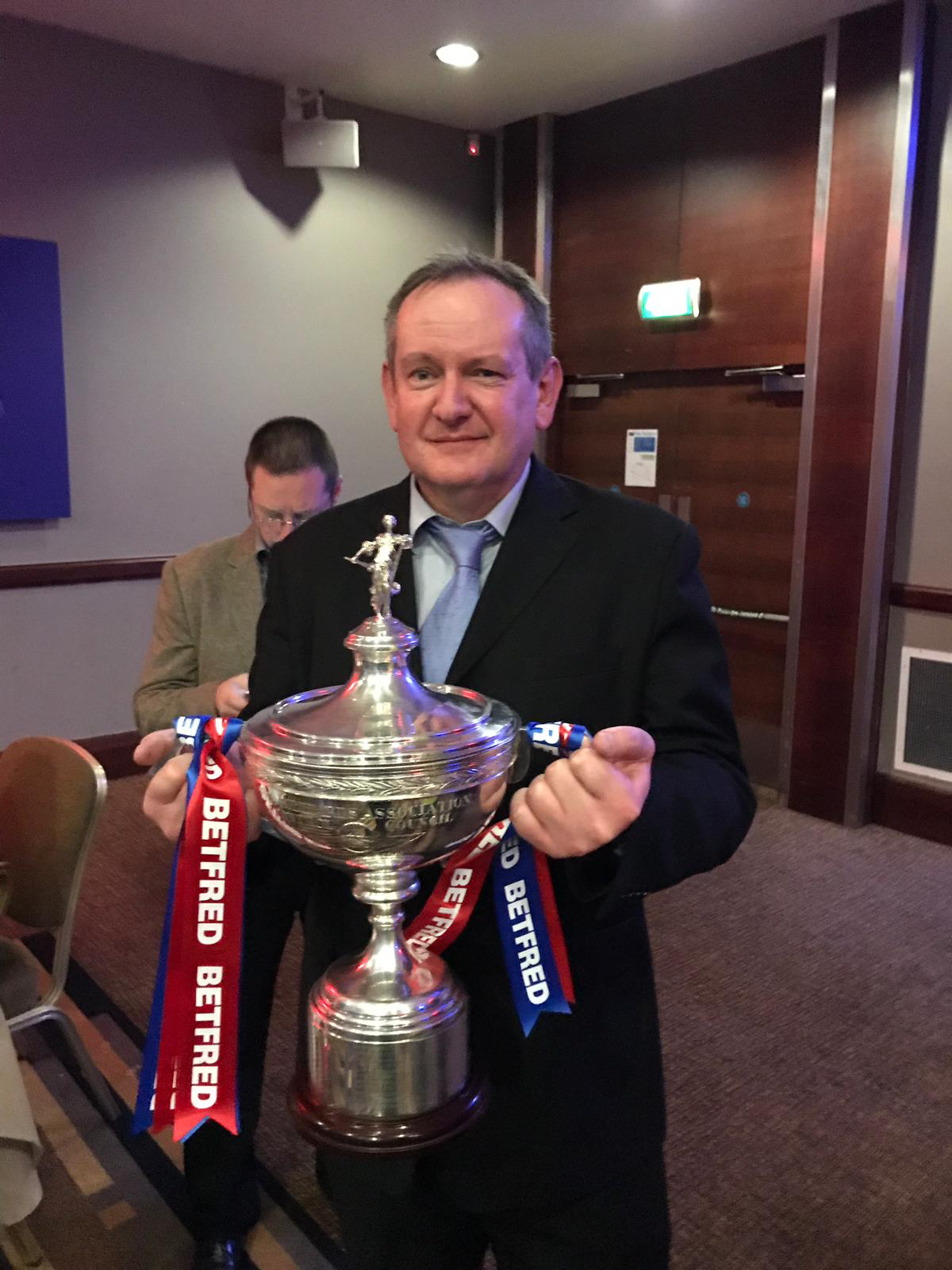 John Airey has been a regular in the stands and a familiar face on the circuit since the early 80s. All being well with the pandemic, he is hoping to celebrate his 40th anniversary of attending the Crucible at next year’s World Championship, having visited the Theatre of Dreams each year since 1981.

Airey has played to a high level himself in the amateur ranks, but his attraction to spectatorship of the sport comes from a fascination in the deeply psychological subplots which competitive snooker elicits. His long term attendance at snooker has also given him a unique insight into the evolution of the sport and the advancement of the standard of play, which he believes has been considerable.

Airey said: “You become almost conditioned to the standard now. You watch with lenses from the present and expect people to clear up in one visit. It is only when you look back at the historical stuff that you really notice the difference.

“Snooker is an individual sport and there is no hiding place. In some team sports, you can get away with a bad game. In snooker you need to perform or you are out. I think mentally it is probably the toughest sport. When you are in your chair, there is literally nothing you can do. In just about any other sport, if the other person is playing well you can try to match them. In snooker there is not a lot that you can do. You need to be extremely mentally tough. I quite like watching players in their chair when I’m in the crowd. You see how they behave when they are getting a pummelling. I think it is the individual and mental side that sucks me in more than anything else.”

Airey was one of the lucky people to secure a ticket for the fabled 1985 black ball final. He was present at the Crucible when Dennis Taylor sunk the final ball to seal his 18-17 defeat of Steve Davis. However, his attendance at the last session was left in the balance right up until the final moments.

“For some reason we hadn’t managed to get tickets for the last session of the final in 1985. I spent three hours queueing by the old ticket office, to try and get the last ticket. Someone handed one in just before the night session started and I grabbed it. It was actually quite a good seat and I was right behind Dennis’ cue arm as he potted the final black. I just wish I had kept hold of the ticket, I could have flogged it for a few quid! When I was in there I certainly didn’t realise or appreciate there would be 18.5 million people watching at midnight. It was a different sort of environment back then. People could still drink and smoke inside the arena and it was a bit more raucous than it is today.

“On the very last black I was so close that I could actually see Dennis just loosen his fingers on his cue so he couldn’t snatch it. He dropped it in and I went mad. There is some dodgy footage going about on YouTube of a teenager with a bowl haircut and white flares jumping around. I can vividly remember the colours. People were going crazy in there. Pints were getting knocked over, the haze of the smoke was coming down from the top of the ceiling. Dennis came over and kissed the trophy after he won.” 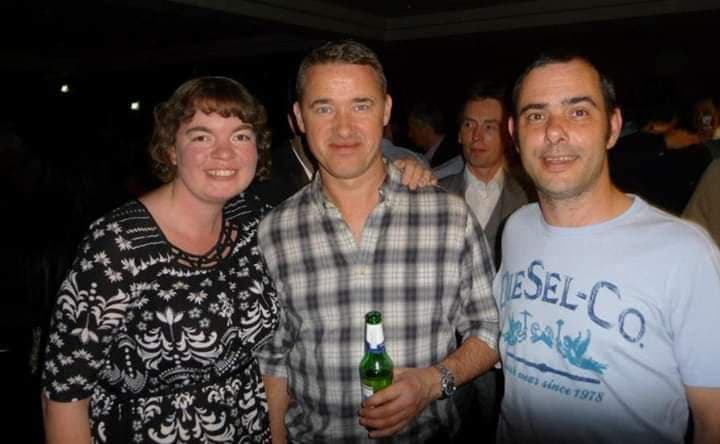 Kellie Barker is another of snooker’s most devoted supporters. Barker’s viewership doesn’t date back quite as far as Airey’s, but she has been ever present at events since 1997. Her first taste of watching snooker’s top tier came at the final of the 1997 Liverpool Victoria Charity Challenge. It could hardly have been a more dramatic introduction to the sport, with Stephen Hendry firing in a final frame 147 to beat Ronnie O’Sullivan 9-8.

Barker said: “To have that as my first tournament was amazing, I was just 16 at the time. I’ve completely loved it since then. I knew from that moment my future was going to involve going to snooker tournaments. To see a 147 in the decider was pretty incredible, I’ve sat through a lot worse than that since then, but I wouldn’t change a thing. A year later I left school and I was able to go to the Crucible for the first time for the 1998 World Championship. I’ve been going for the last 23 years.

“I’ve met lots of great people and made so many good friends. Just being in the audience, it is the silence that makes it. It’s funny how a silence can create such an atmosphere. The Crucible is an incredible venue when it is full. The acoustics, the sound of the balls clicking. It isn’t just a random big hall. Watching live is amazing. Over the years I’ve been lucky enough to see about 15 maximum breaks, which have been incredible to witness in person.

“I love watching a lot of sports, but nothing comes close to snooker. I think it is the calm. You are there in the audience and everyone is there because they love it. It is mesmerising watching pot, pot, pot. It is a real gentleman’s game. In football they go down if they are tapped on the shoulder, whereas in snooker they are all so sporting. It is honest people and a working man’s game. Anybody can pick up a cue and have a go. You don’t need a big bank account.”

Barker was one of a limited crowd at this year’s World Championship and was present to see Ronnie O’Sullivan lift his sixth Crucible crown. She admits it was nice to be able to have some semblance of normality during the pandemic and return to one of her favourite pastimes.

“It was so lovely. I work in the Phoenix Theatre in London and have been furloughed since March. To get the snooker on in a theatre really was beautiful. I am so glad I was there to see it. I saw Barry Hearn when the players were being introduced on the first morning with a big proud smile and I just wanted to run over and hug him to say thank you. How the year has turned out, it was lucky that we had that window where fans could go in for a few days.” 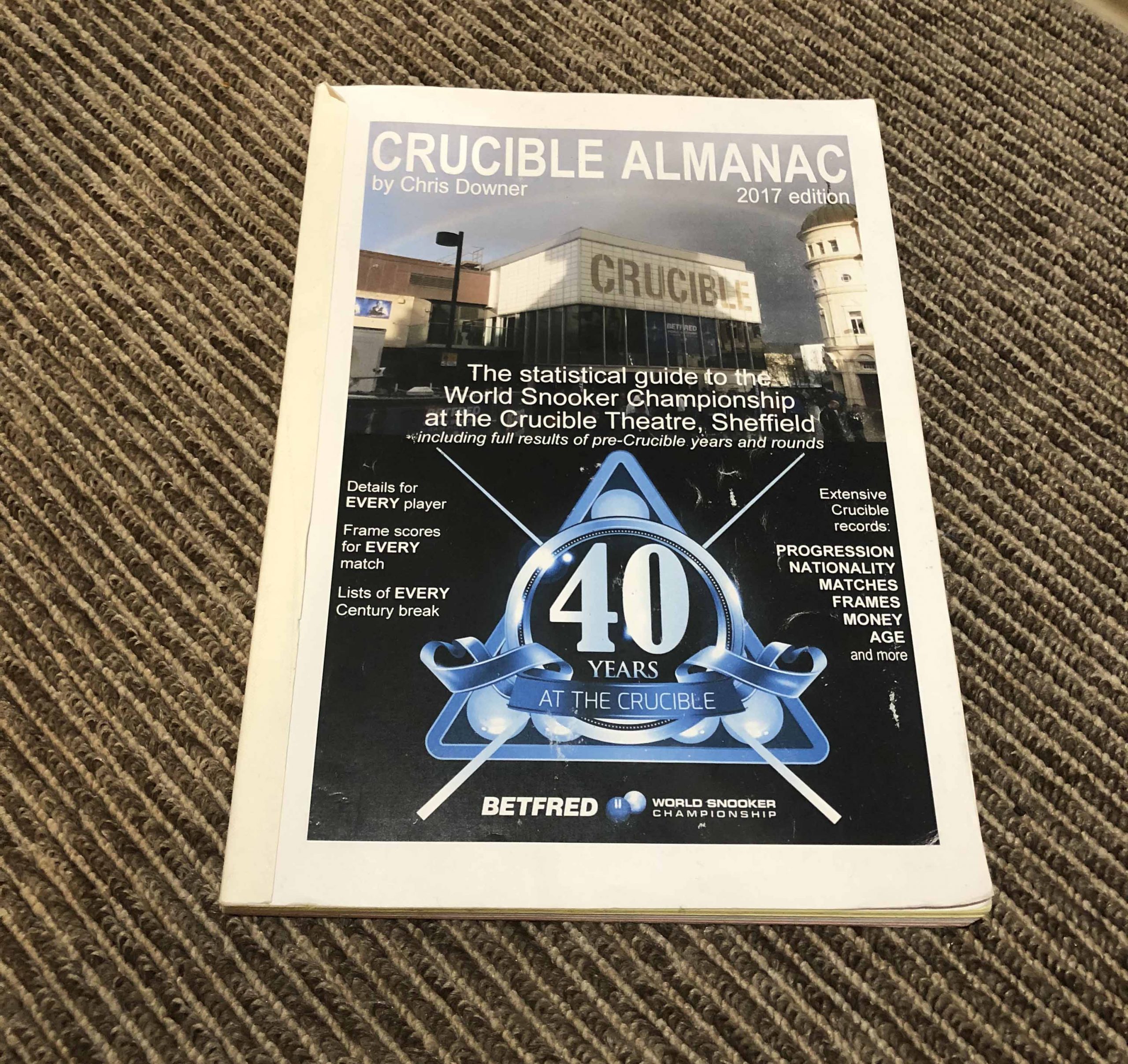 The 2017 edition of the Crucible Almanac.

Barker met her partner Chris Downer at the snooker, having been sat beside each other by chance. Downer himself is an avid snooker fan who has been attending events since 1992 and says he has now clocked up around 150 ranking event finals. Downer has achieved cult status among hardcore snooker fans, as the author of the Crucible Almanac. The book contains pages upon pages of facts and figures from all editions or the World Championship at the Crucible.

The painstaking detail in which Downer has analysed the World Championship takes the reader into the deepest and darkest recesses of statistical wizardry. The nuggets of data range from the best and worst ratio of points scored over points conceded, to youngest and oldest match winners in the event. Just about any statistical quandary you can imagine has an answer somewhere within the almanac and it’s become a key resource for commentators and journalists alike.

Downer said: “In the past, there were things like the Rothman’s Yearbook and the Benson and Hedges Yearbook with all of the stats. All of a sudden they stopped and I had loads of books from car boot sales that had data up until about 1986. I tried to update it just as a personal whim really and it became a bit bigger. I realised that actually, before anyone could look up all they want on google, there wasn’t going to be anything to go to, so I put it all into a more proper format. It grew and grew, I got a collection of old Snooker Scene magazines and added in more and more bits. It became a bit of a bible.

“It was only really meant as a little thing really. So it is nice to hear commentators mention that they are using it. I get people contact me with all sorts of obscure queries. Someone got in touch about a frame in the 1984 final. I’d got Steve Davis beating Jimmy White in a frame as 88-0. He wrote to me in a little email, as the frame was actually 88-5. I’d overlooked five points. I look back at a clip of the actual frame on YouTube and sure enough Jimmy White had scored five points. I just found it fascinating someone had actually spotted that.”