Michael Holt’s hopes of reaching the BetVictor Shoot Out final for a third consecutive year were ended by Matthew Stevens in the second round.

Holt was runner-up in 2019 then won the world ranking event last year, but this time falls at the last 64 stage. A break of 43 put Stevens ahead, though he missed a red to a centre pocket to gift his opponent a chance. But Holt missed a black off its spot trailing 43-21 with two minutes remaining, and was soon heading for the exit door.

Welshman Stevens goes into the draw for the third round, which will be made on our Facebook page around 9.30pm tonight.

“Michael has a tremendous record in this event and I was lucky he missed the black in the end,” said former UK and Masters champion Stevens, who has only reached one Shoot Out quarter-final in ten years. “Every year in this event I join in with the crowd and have a few beers so if I’m playing in an evening session I can hardly see the balls! Hopefully this year I can do better.”

Thepchaiya Un-Nooh beat Holt in the 2019 final and he is among the favourites for the £50,000 top prize this time, having knocked out John Higgins. Thailand’s Un-Nooh, one of the fastest players on the circuit, fired breaks of 47 and 23 in a comfortable win. 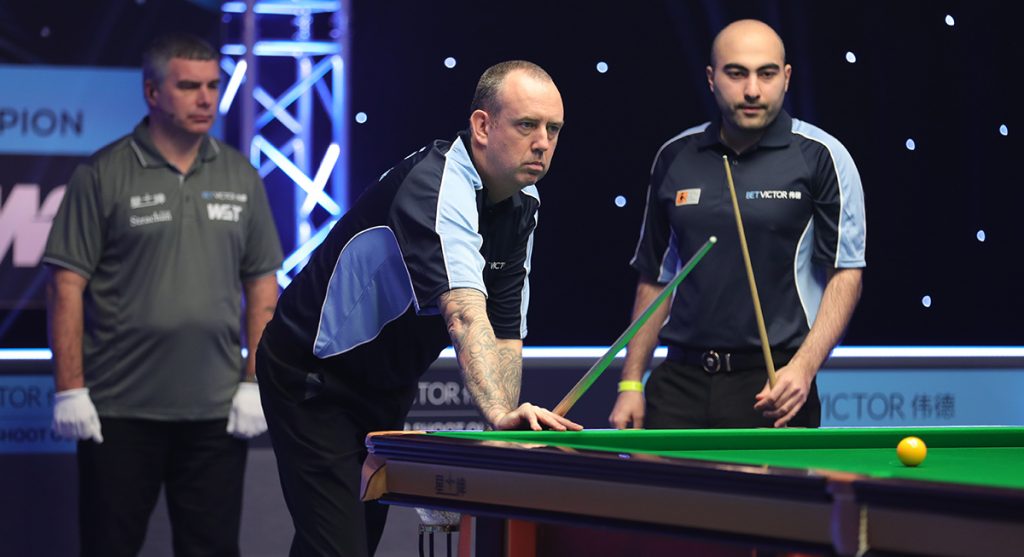 Three-time World Champion Mark Williams got the better of Hossein Vafaei while China’s Liang Wenbo compiled a break of 81 to beat Eden Sharav.

Declan Lavery, the Northern Ireland national champion, enjoyed a thrilling win over fellow amateur Leo Fernandez. An excellent break of 34 put Lavery three points ahead with just 20 seconds on the clock. Fernandez then converted a brilliant long pot on a red to leave himself a tricky black for victory, but rattled it in the jaws of a top corner.

Sean Harvey almost joined them as he led Louis Heathcote 17-1 in the closing stages of their frame, but a fluked red gave Heathcote the chance to make a winning 26.

Round two continues from 7pm on Saturday night.