The 900 Snooker: Players, dates, schedule, how to watch, rules and format

A brand new event is hitting television screens this month with The 900 giving opportunities to 96 amateur snooker players to show their skills on TV.

Jason Francis, the man behind Seniors Snooker and the manager of Ronnie O’Sullivan and Reanne Evans, has come up with the new idea which will see a huge amount of snooker added to the TV Guide.

Specifically, it is for a whole host of players who would not normally get much chance at all to play to a big audience, which they will be relishing with The 900.

‘The thinking behind it is me trying to create some TV opportunities for amateur players,’ Francis told Metro.co.uk.

‘I think there’s a big gap in the amateur snooker market. I came up with a concept that the TV company liked and I’m going to put 96 amateur players on tele, at night, Monday-Wednesday across 25 nights.

‘The first time it’s been done really. I’m excited and the players are excited because they all want to play on TV.’

Francis explains: ‘Very simply, no apologies, it’s comparable to the Shoot Out. It’s a 15 minute frame, which is 900 seconds.

‘There’ll be a spotted cue ball so people can see the spin players put on it. It’s a random draw, straight knockout, so it’s pretty brutal.

’20-second shot clock, ball in hand for a foul, you have to pot or hit a cushion, you can’t roll up. We’re following the fast and furious model and giving the chance for an unpredictable winner.

‘Each week is a separate event. Eight players start on Monday. The four players who win their quarter-final matches all qualify for the Wednesday.

‘On the Tuesday, the four that lost on the Monday get a second chance as they’re joined by four more players.

‘It’s a mix of players, I’m passionate about promoting the women’s game and disability snooker,’ said Francis. ‘There’s legends as well – Dennis [Taylor], Joe [Johnson], Patsy [Fagan]. But some exciting youngsters as well so there’s a real mix. Dennis Taylor at 74 to Alfie Lee at 18.

‘[Tony] Drago coming is great, the list of names is great. The Canadian champion is coming, the American champion, Pankaj Advani who’s the most followed snooker player in the world.’ 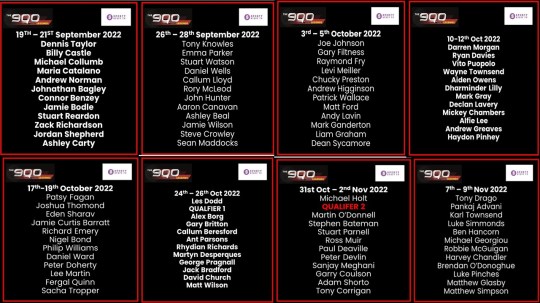 Each night will be shown from 10pm-1am.

You can watch all the action on SportyStuffTV, which is availabel on SKY 437, Freesat 250, Freeview 264 and sportystuff.tv.

Where is it and who is presenting?

‘Everything’s in Reading at the Crucible Club,’ said Francis. ‘We’re building a studio upstairs. The broadcast will be headed up by Rachel Casey and Neal Foulds, with Lee Richardson the other pundit. He’s played on the Seniors tour and the amateur circuit, he knows all these players. It’s a nice mix.’

Reanne Evans and Dave Clark have also been confirmed as involved in the presentation.

Jason added: ‘Then you’ll find in certain weeks when they’re not playing, say Michael Holt will jump on comms.’

‘The long-term plan is to get this played in clubs. The format, the scoring software, I’m going to roll that out to clubs free of charge so that ultimately they can send me their champions,’ said Francis.

‘I would like to go into 900 junior competitions. I’m looking at a 900 pro-elite for TV and getting that sanctioned.

‘I’m always going 100 mph, so we’ll get this first one right first, but I’m excited about it. There will be things that really work and maybe things that need tweaking, we’ll see, but we’re doing things for amateur snooker.’