1. How many different locations hosted ranking events during the 2020/21 season?

3. How many maximums were made in total during the season?

4. And who was the only player to make two of those?

5. Which player lost his cue after leaving it in a hotel car park, forcing him to withdraw from the BetVictor European Masters?

6. By what scoreline did Aaron Hill beat Ronnie O’Sullivan in the second round of the BetVictor European Masters?

7. How many shots did Neil Robertson play in the last frame of the English Open?

8. During the season, how many ranking event finals went to a deciding frame?

9. Which referee returned to the table at the Northern Ireland Open for the first time since suffering brain injuries in a car accident in 2018?

10. Which German player scored a shock 4-0 win over Mark Selby at the Northern Ireland Open?

11. Who won a particular ranking event for the third year in a row, beating the same opponent in the final by the same scoreline each time?

12. The headline ‘Trump Loses – By A Lot’ on this website came just a few days after the US Presidential Election, but to which other result did it refer?

13. How many of the top 16 seeds reached the second round of the Betway UK Championship?

14. Who made five centuries in a 6-0 win in the first round of the Betway UK Championship, then saw four centuries made against him during a 6-0 defeat in the second round?

15. Lu Ning, a semi-finalist at the Betway UK Championship, comes from which city in China?

16. Ronnie O’Sullivan was nominated for BBC Sports Personality of the Year for the first time in his career, but who was the winner of the main award?

17. Which player was awarded an MBE in the Queen’s Birthday Honours?

18. Which two players replaced Judd Trump and Jack Lisowski when the duo were forced to pull out of the Betfred Masters after testing positive for Covid-19?

19. Which four players did Yan Bingtao beat to win the Betfred Masters?

20. Which event had its trophy named after Brandon Parker, in memory of the former WST director and player manager who passed away in 2020?

21. Mark Allen made the highest break in the history of the BetVictor Shoot Out – what was it?

22. Who came within a frame of becoming the first amateur to reach the final of a ranking event?

24. What was Jordan Brown’s world ranking when he won the BetVictor Welsh Open?

25. How many frames did John Higgins lose in the Cazoo Players Championship?

26. What was Stephen Hendry’s break in the second frame of his 4-1 defeat against Matthew Selt when he made his comeback at the BetVictor Gibraltar Open?

27. Which result confirmed that Judd Trump had won the £150,000 BetVictor European Series bonus?

28. Who finished bottom of the final group of eight players when Mark Williams won the WST Pro Series?

29. Which three players did Neil Robertson beat to win the Cazoo Tour Championship?

30. Who did Alan McManus lose to in the Betfred World Championship qualifiers – his last professional match?

31. How many former champions reached the quarter-finals at the Crucible – a new record?

32. How much money did Betfred donate to our charity Jessie May after the 80th century break was made at the World Championship? 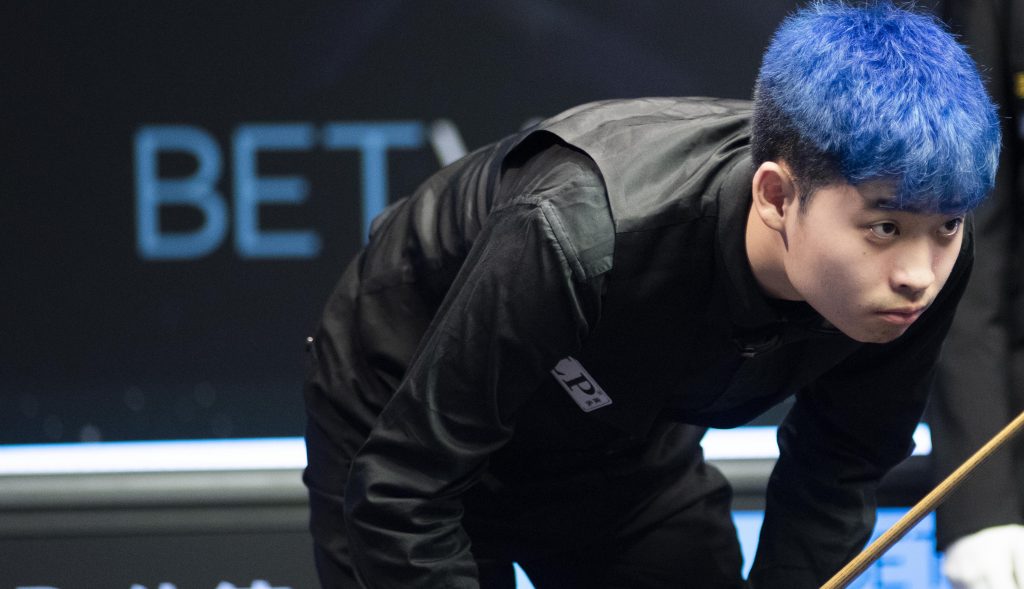 33. Name the pictured player, who didn’t quite start a trend with his blue hairstyle.

34. How many players currently ranked among the top 16 were beaten by Rookie of the Year Pang Junxu during the season?

35. How many players who started the season with zero ranking points climbed into the official top 64?

36. A complex mathematical study at the University of Limerick, analysing all matches played since 1968, named which player as the highest performing snooker star of the modern era?

38. “Considering that six or eight weeks ago I was on the verge of retiring and now I’m in the final, you couldn’t make it up.”

39. “A friend asked if I would wear nail polish and I thought ‘why not’? I actually really like it.”

40. “To accuse me of moving on his shots and standing in his eyeline, it’s just crazy. I wasn’t going to back down. He is a great snooker player, the best ever in my opinion, but sometimes he lets himself down with what he does and what he says.”

41. “There are probably 200 billion people that have come and gone in this world, but there are probably only ten people in the sporting world that have actually surpassed what we thought was humanly possible. Diego Maradona was one of them.”

42. “It has been a roller-coaster over the last few years. I went through mental torture, knowing that I had just plummeted off the face of the Earth because of something that wasn’t my fault.”

43. “Sometimes finals are so bad they are good. We were missing pots that club players would have potted and fluking snookers out of snookers. Maybe people will be in the club tomorrow trying to replicate those shots.”

44. “My problem is I’m a thinker, stuff will pop in there, like the Stay Puft Marshmallow Man in Ghostbusters.”

46. “This is my natural hair, when it gets this long it’s crazy. My daughter Penelope loves playing with it, so I let it grow as long as it doesn’t start to cover my eyes, at least until the hairdressers open.”

47. “It’s the best week of my snooker career. I have won bigger tournaments, but in terms of the way I have played and felt the whole week, it’s my best ever.”

48. “Usually you want to keep your opponent in his seat because that means you are winning. But against my dad, every ball I potted, it felt wrong, I felt bad. There is no one I ever want to win more than my dad. It was a massive struggle.”

49. “I was actually struggling to breathe at one point. I don’t know what happened, that’s just what this theatre does to you. I think I stopped breathing for a few frames.”

50. “I am having to hold myself back from throwing the microphone out of the window. I am raging.”