The Crucible 2021: A Fan’s Perspective

This year’s Betfred World Championship was a landmark event for English sport as it was the first to welcome crowds in 2021, and on the final day it became the first event to host a capacity crowd for over a year.

The 17-day tournament was part of the UK Government’s Events Research Programme, generating data which will help bring back all forms of venue entertainment.

Chris Downer, a lifelong snooker fan who has been coming to the Crucible since 1993, has written this description of the process he went through in order to be among the lucky few inside the famous arena in Sheffield… 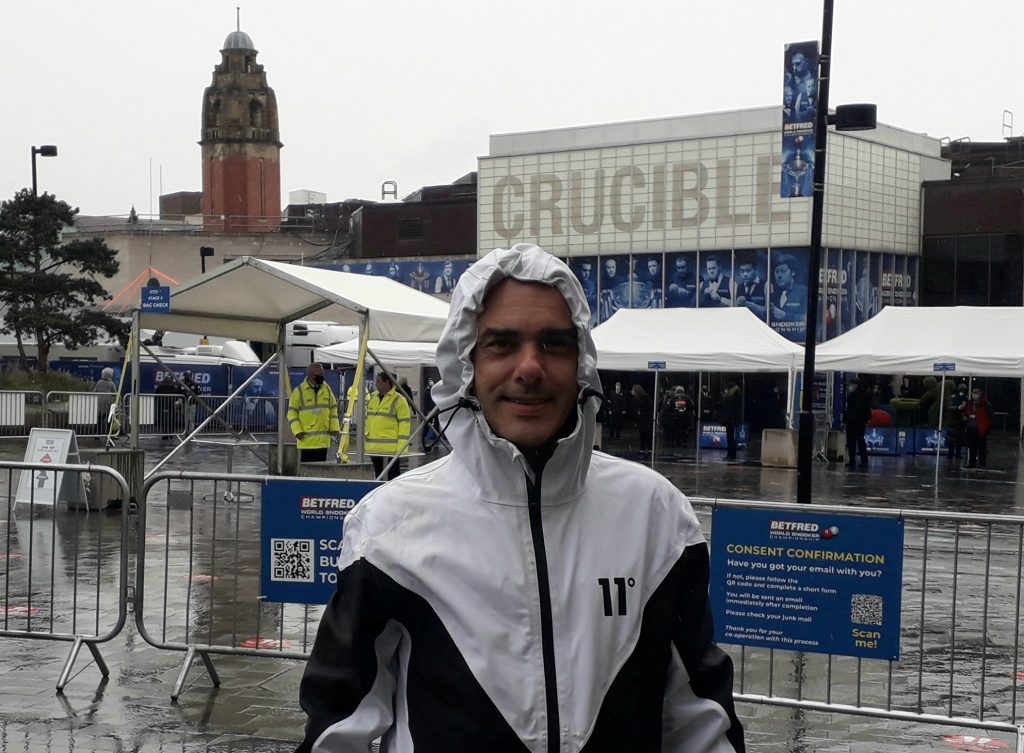 “As the 2021 World Championship drew close, it was confirmed that the tournament would be one of the Government’s pilot events to be played in front of a live audience. Not quite the Kitchener-esque coerciveness of ‘Your Country Needs You’ but I was happy to do my bit and be part of the experiment to get life back on the road to normality.

The demands made on those attending the event, when first seen on paper, seemed quite a lot of bother just to watch a snooker match but, as it turned out, the whole thing was organised very well down to every detail, the staff friendly, and the procedures quite straightforward.

The only thing one had to depend upon was to test negative for Covid. Thankfully, I did. 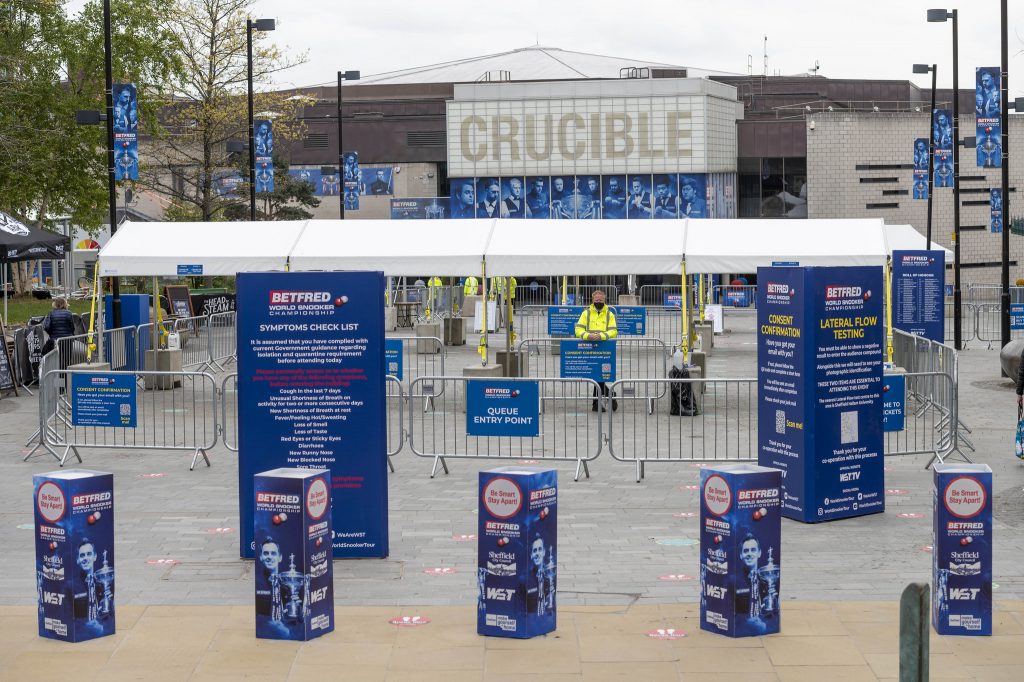 The compound for event goers extended from the Crucible main entrance right through the central expanse of Tudor Square allowing a spacious entranceway with social distancing the foremost consideration of the whole operation, and strictly adhered to throughout.

Firstly, one had to use the hand sanitiser and produce an email or text message confirming a negative Covid test that day or the previous day, along with photographic ID. Those attending multiple days were given a wristband to show the date of their last test, valid for three days. A further test would be required if attending a fourth day.

At the second checkpoint, sight was required of the email confirming that the ticket holder had submitted formal consent to be part of the pilot. A QR-code link was available for those who may have overlooked this, so nobody was turned away just for lack of it. 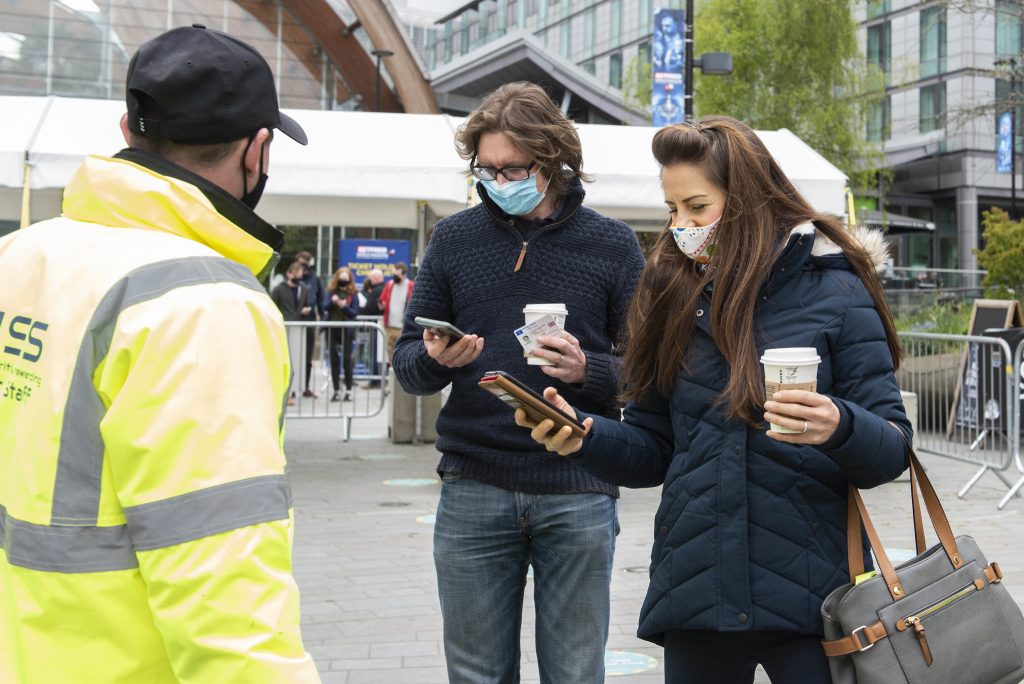 The third base is where the ticket was scanned, and from here each household bubble was ushered in at social distancing intervals, with a separately indicated route to each of the auditorium’s five doors, from street to arena.

Those who had attended the tournament’s three available days last year will have recognised the bareness of the foyer: no bookmaker; no merchandise; no café or bar (although bottles of water were available). The NHS Covid app check-in was the final requirement before finding one’s seat. Plenty of hand sanitisers were dotted around the foyer. Inside the auditorium, like last year, seats had been arranged in various sizes of household bubble between one and four, with signs on the intermediate ones where bums must not be deployed. 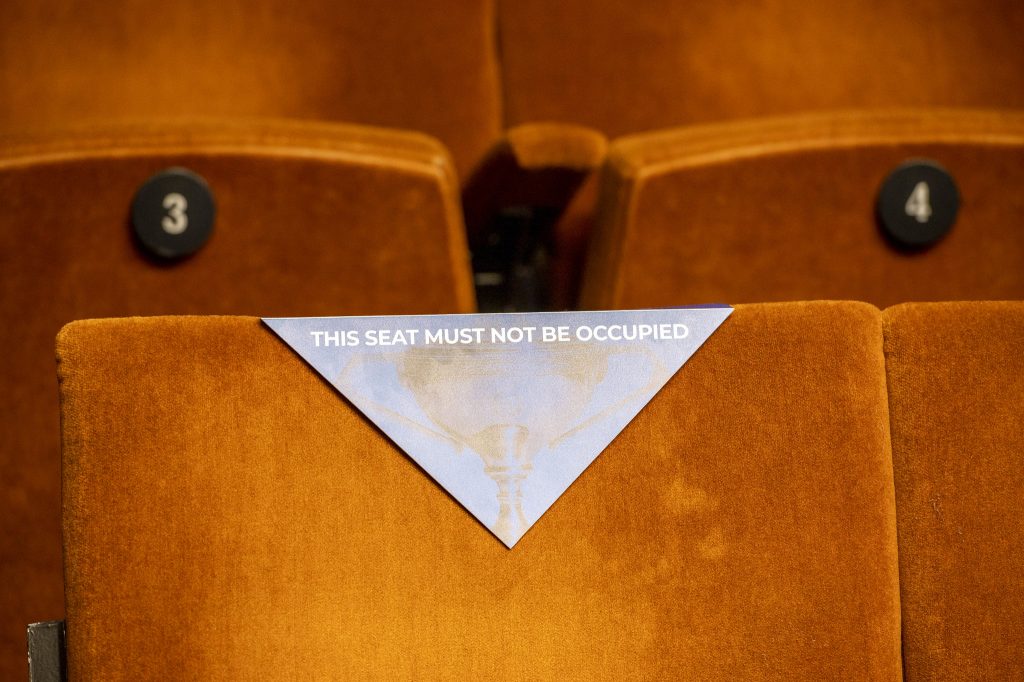 I work in an office and, for the last year, have mainly worked from home, so I am not one of the key workers who are used to spending all day wearing a mask. Unlike in 2020, face masks were a requirement even when seated during the match, and I had wondered whether this would be an uncomfortable hassle. It wasn’t. The stewards kept their eye on punters during the sessions, and reminded those whose masks had slipped below the nose to pull them back up.

After the opening weekend, the attendance on Monday morning was lower. But as the week went on, the attendances rose, steadily if not spectacularly, and the applause and cheers were unmistakably those of a Crucible crowd and not a great deal quieter than normal.

The most difficult part of the operation to implement was the requirement that fans remain seated at the interval and end of session, to await the stewards’ instructions to leave, row by row, in order that social distancing could be maintained. There were always a few people who got up to dash out before it was their turn. Most of the time, though, the vast majority complied with the requirements. The referees, helpfully, at the intervals reminded the crowd to stay put until directed to leave. 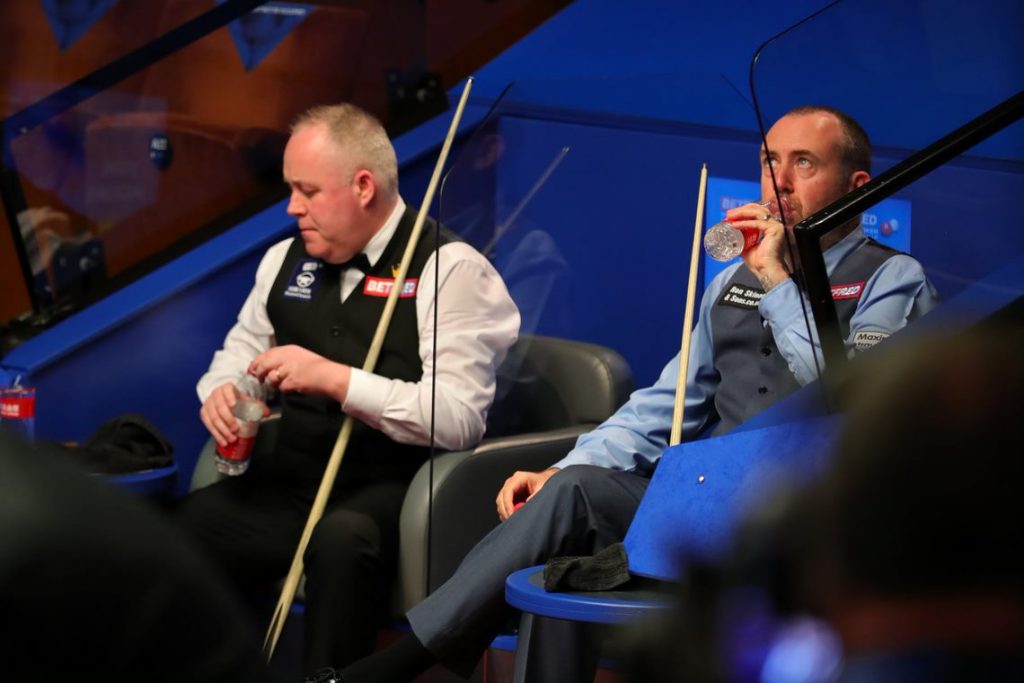 When the John Higgins v Tian Pengfei match came back for its unscheduled third session, it was interesting to see the players’ seats, dividing walls, and rests being sanitised between the two matches. It seemed a little ironic that Olivier Marteel, taking time off from his day-job as a nurse, should come to Sheffield to put on surgical gloves and wipe surfaces clean!

Returning for the final, of course there was the much-anticipated full crowd. In fact, we mused afterwards that it may have been the fullest crowd ever seen during live play, because without the bar and bookies there was no inclination for ticket-holders to be anywhere other than in the arena. The enlarged capacity and the rain which fell heavily on the final day did not cause any delays in getting into the building. Social distancing was maintained other than at one’s seats but, even so, everyone was guided through the procedures efficiently. Those two Monday introductions, bigged up appropriately and inimitably by Rob Walker, were quite something to experience and very few matches, if any, have ever created quite such a noise during the walk-ons – in fact, the cheering was at its height before either of the players was welcomed.

All in all, the whole event was run like a well-oiled machine. All the staff were exceptionally friendly, which in any case is always true of the Crucible, and everyone knew what they were doing. I overheard one woman, on her way out of the arena, say to a steward: “That was really well organised, thank you,” in a tone which suggested that she may have had her reservations before coming. World Snooker Tour and the Crucible should be proud of the way they made it work, and I hope it came across as such to the television viewers.

Whether ‘My Country really did Need Me’ – and it is certainly debatable – it was definitely worth the effort. And let us hope that all of us who made that effort have played a part in the return to a packed Crucible for every session in 2022.”