Judd Trump kept his World Championship hopes alive earlier today, producing a late rally during the morning session to get back on level terms with Stuart Bingham in their quarter-final.

Having initially struggled in the match, the 32-year old would reel off the last three frames in order to level the match at 8-8 ahead of the match's resumption this evening.

Trump played some brilliant at snooker at times during this period, including falling just short of a century in 15th frame. Unfortunately, he would struggle to clear away the colours.

Having attempted to put himself in position to play the brown, a wayward pink meant that the world no.4 inadvertently snookered himself. With the frame already wrapped up, he decided to have a bit of fun with the situation.

Trump got the attention of referee Ben Williams, seemingly pointing to a member of the crowd. When the official turned around to look, he quickly moved the cue ball and got a shot off.

It went down an a treat with both the crowd and the commentators.

Judd Trump got referee Ben Williams here - much to the delight of the Crucible crowd 🤣@judd147t | @bhw147 | @WeAreWST pic.twitter.com/t5PueFbbrE

It's safe to say that he probably wouldn't have pulled this out of the bag if the frame was still in the balance. Trump would then go on to win the final game of the session to get back on level terms.

The Englishman will be looking to win a second world title in the days ahead, while Stuart Bingham is also be looking to add to his one triumph in this event.

The match is very much in the balance, with the winner going on to face Mark Williams in the semi-final. The Welshman completed an impressive 13-11 victory over Yan Bingtao earlier today.

On the other side of the draw, Ronnie O'Sullivan will take on either John Higgins or Jack Lisowski. 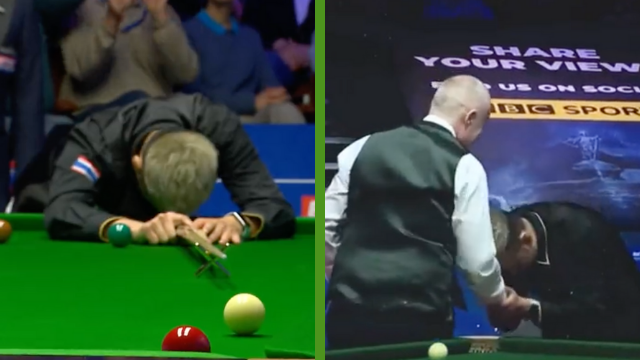