Neil Robertson revealed that he feels his game is better than ever as he reflected on an emphatic 6-2 win over Zhou Yuelong in the semi-finals of the Betway UK Championship.

That didn’t take Yue-Long. Robertson needed just 148 minutes to wrap up the match

World number three Robertson is into the final of this event for the third time, having lifted the trophy in 2013 and 2015. He will face Judd Trump or Lu Ning over 19 frames on Sunday with the winner to lift the trophy and bank £200,000. Victory would make Robertson the sixth player to win the UK Championship three times, joining Ronnie O’Sullivan (seven titles), Steve Davis (six), Stephen Hendry (five), John Higgins (three) and Ding Junhui (three).

It will be Robertson’s third final of the season, and while he lost to Trump in the English Open final and to Mark Allen at the Champion of Champions, his seemingly limitless self-belief will be undented as he aims for his first silverware since the World Grand Prix in February. He has made three centuries in each of his last two matches and looks at the top of his game.  The 38-year-old Australian is into his 31st ranking event final and is seeking his 19th title.

The result ends Zhou’s hopes of qualifying for the Masters as he needed to reach the final to jump into the top 16. Jack Lisowski is now safe in that race, while Thepchaiya Un-Nooh will earn a Masters debut if Lu Ning doesn’t win this week’s tournament.

Robertson got the better of a fragmented opening frame then made a 125 for 2-0. Zhou had first chance in frame three and made 46 before missing a red to a top corner, then Robertson replied with 62 before wobbling the final blue in the jaws of a baulk pocket. A safety tussle was resolved when Zhou escaped from a snooker on the blue and fluked it into a top corner. He added pink and black to get a frame on the board.

But Robertson wasn’t rattled and compiled a run of 118 for 3-1. In frame five, Robertson led 56-0 when he ran out position, but when Zhou went in-off playing safe on the penultimate red it was 4-1.

A break of 104 in frame six – his tenth century of the tournament and 753rd of his career – put Robertson 5-1 ahead. Zhou restored some respectability to the scoreline and showed his break-building talent with a excellent 141 total clearance. But that just delayed the inevitable as Robertson closed out victory in frame eight with an break of 89. 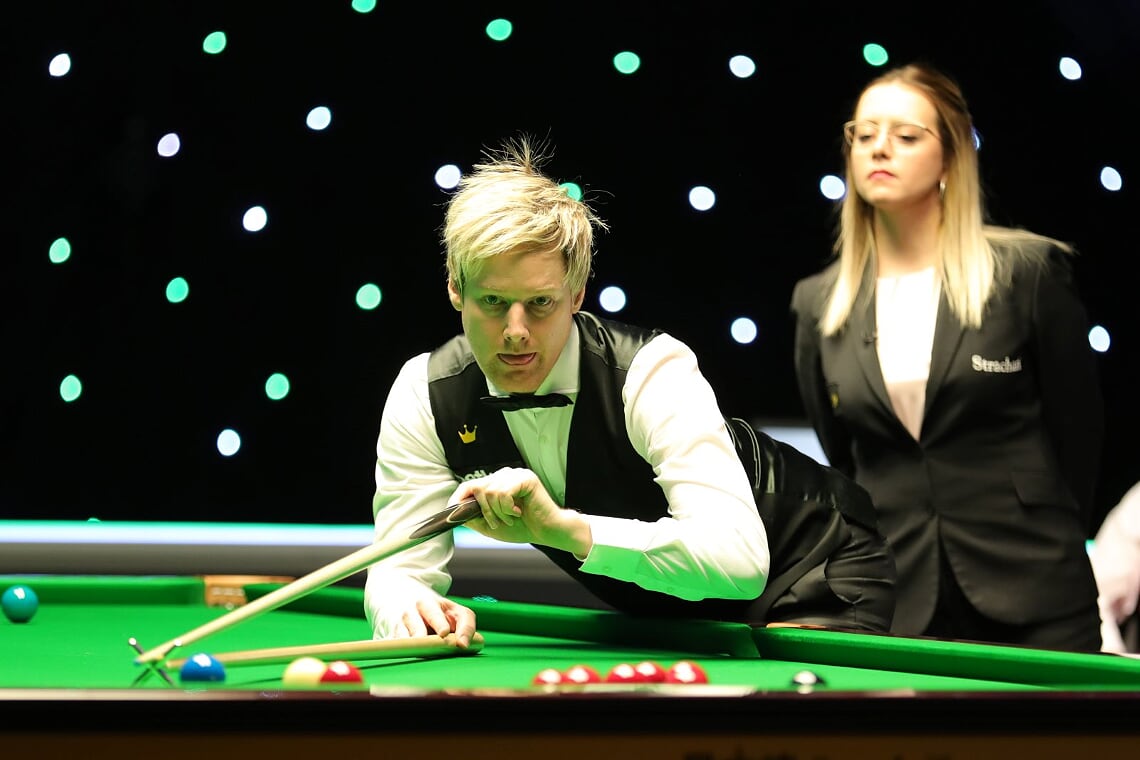 “My game is the best it has ever been,” said 2010 World Champion Robertson. “Last season I reached three finals in a row and I have carried that on. My club WTs in Cambridge as well as the Grove Academy have been brilliant in terms of allowing me to practise and keep my consistency. Plus there has been less travelling and jet lag this season so physically I feel fantastic.

“When I played Zhou in the final of the European Masters last season (Robertson won that match 9-0) I didn’t let him settle, and it was important for me to do the same today. Even when he fluked the blue to go 2-1 it jolted me into wanting to get back on top. I probably played better today than I did against Mark Selby yesterday.

“Everyone on the tour really rates Zhou and I’m sure he’ll be back in big finals before long. He has determination and he’s also a very friendly guy.”

Asked about the possibility of playing Trump tomorrow, Robertson added: “What Judd has done in the last couple of years is incredible, I have learned a lot from him, in terms of how hard he practises. He very rarely takes days off and works a lot harder than he did four or five years ago. Having lost two finals this season and I have plenty of motivation to get the job done this time.”