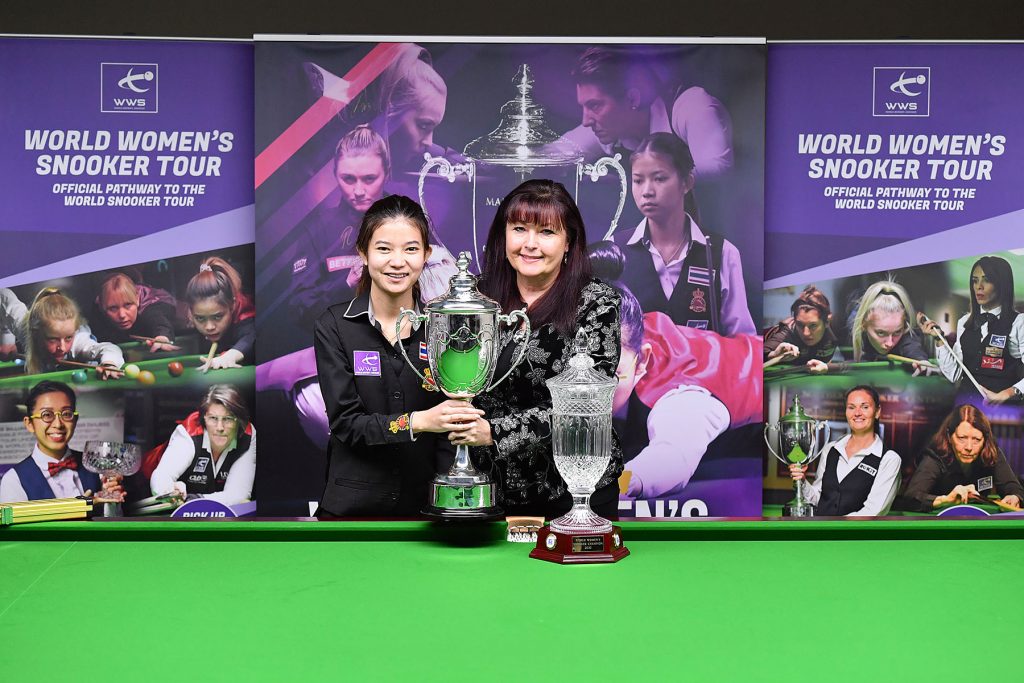 Wongharuthai is presented with the trophy by Mandy Fisher

Nutcharut Wongharuthai won the World Women’s Snooker Championship for the first time following a dramatic 6-5 victory against Wendy Jans, decided on the final black at the Ding Junhui Snooker Academy in Sheffield.

Staged for the first time since Reanne Evans’ claimed a record 12th world title in June 2019, the tournament saw 50 of the best female players from around the world compete across four days to lift the Mandy Fisher Trophy.

A breakthrough victory for Wongharuthai sees the 22-year-year-old become the 13th different winner and the first ever Thai player to win the world title. She also becomes the first new winner of the tournament since 2015 and the first player other than Reanne Evans or Ng On Yee to win the title in 19 years.

She is now set to join Reanne Evans and Ng On Yee as the latest female player on the World Snooker Tour, as she will be offered a two-year professional Tour card from the start of the 2022/23 season.

The world number three came into the tournament in a rich vein of form following her second ranking success at last month’s British Women’s Open and her run to the quarter-finals of the WPBSA Q Tour event just two weeks ago, during which she defeated five male players.

With the top two seeds Reanne Evans and Ng On Yee having exited at the quarter-final stages on a thrilling Sunday evening, a new champion was guaranteed as the tournament entered its final day. Belgium’s Jans booked her place in the final for the first time with a 5-2 victory against English debutant Jamie Hunter, while Wongharuthai secured comfortable passage to the title match with a 5-1 success against Rebecca Kenna.

It was the third seed Wongharuthai – also known as Mink – who made the stronger start as she claimed two of the first three frames, looking to improve upon her final run at the 2019 edition when she lost out to Reanne Evans in the final.

Back came Jans with a match-high break of 97, before she added each frame either side of the mid-session interval to lead by two for the first time at 4-2. As the next two frames were shared, Jans moved to the brink of the title for the first time at 5-3, but Wongharuthai, who cites Mark Selby as one of her snooker heroes, displayed Selby-like qualities to hit back to force a nail-biting decider.

Both players had chances and it appeared as though Wongharuthai was over the line – only for Jans to earn the penalty points she required on the final brown in order to be able to win the match having needed a snooker. Having potted brown, blue and pink however, a long black would elude her and it was Wongharuthai who would sink the final ball to become world champion for the first time.

Her coronation represents the completion of a journey for a player who began to play snooker aged at 10 years old, before making her debut at the 2017 World Championship, during which she showed her potential by completing the tournament high break of 90. A year later she would reach her first ranking event final at the British Open, before contesting the World Championship final for the first time on home soil in 2019, losing out to Reanne Evans at the Hi-End Snooker Club.

In 2019 she became the first female player to make a verified 147, during a practice match in Thailand.

She is now looking forward to joining the World Snooker Tour for the first time from the start of next season and believes that she can be successful and continue to improve her game on the professional circuit.